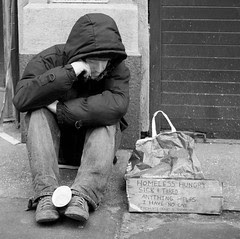 I am deeply grateful to all the people who responded to my previous testimonial and all the kind and helpful comments, believe me, you showed me more compassion than I received from fifteen years as a Christian - I thank you. I don't always have access to a PC but when I do I always reply to messages.

As before, the Christians I am talking about are those whom label themselves as "born again," and this is where I will start.

I am an atheist for one reason and one reason only - Christians - and what I observed for over fifteen years. The sheer magnitude of hypocrisy between what they SAY and how they actually ARE as people. The staggering arrogance of Christians and the distasteful, mocking, style they have in dealing with beliefs that are different to their own.

The unbelievable COLDHEARTEDNESS of Christians is matched only by their indifference in the presence of human need and suffering. Make no mistake about it, I really believed with all my being that I had a personal relationship with Jesus. I really believed that I could hear the small still voice of the Holy Spirit, and that He was living inside me. I would firmly but gently jump to the defense of Jesus whenever I heard his name being slandered, just as I would for a dearly beloved friend - and I was proud to do so. I also greatly miss this relationship, but I cannot in all good conscience force myself to follow what I believe to be self delusion.

Here's the crunch: Christians claim that they have had a life changing experience with the risen Jesus, they have been born again, they are being transformed by the renewing or their mind, they are a new creation in Christ, and on and on and on and on. And yet, while making these wonderful claims, not only are they no different to anyone else, but most of the time they are so much worse! I accept that it is unreasonable to look for perfection in anyone, but Christians can't have it both ways. If they really were "born again," and if they really did have "the Holy Spirit living within them," there WOULD be a positive difference about them. This is not an optional extra. They would really be a "light to the world," if any of it were true, regardless of the "free will" cop out they use to justify themselves. Just because a small minority of Christians are good, compassionate, genuine people - and it is a small minority - it is just as unreasonable to judge the validity of a whole belief system on this small minority.

The nature of my work took me to all ends of the UK and I cannot begin to number how many times I have heard the same story. People would be genuinely searching for something to fill a void in their lives and would be introduced to Christianity, with open minds. They would go to the Alpha courses and perhaps a small house group and get into reading the bible, then they would see what Christians are really like outside the church: the back stabbing; the corruption and perversions of people in leadership; the shallow and dishonest and shallow way they would pretend to love them and others. The newly converted would turn away in disgust and disillusionment. Then there is another, darker, more sinister side to Christians - the way they latch on to very vulnerable and damaged individuals and pretend to be their best friend in order to get their spiritual scalp. However, when that person stops being what the Christian wants, and having created a dependence, then they dump them, just like that! Very often you will discover that a person has committed suicide soon afterwards, but hey, why should Christians care? They were only going to hell anyway, weren't they?

To give a visual image of my journey to the place I am now it is rather like the Angel in the film Michael, throughout the film John Travolta keeps shedding his feathers till his wings are completely gone by the end and he is an angel no longer. As a new Christian I couldn't understand how anybody could not believe in God or Jesus. It seemed absurd to me that anyone couldn't see this truth. I threw myself into church, Bible reading, and sharing my new found faith. Although most people in the church always kept me very much at arms length, I respected what they were to each other and hoped that I would one day be accepted as one of them. I eventually realized that was never going to happen.

By chance I came across a guy I knew who had been a real bad character, and I saw a different person as he started talking to me about what God had done in his life. This was a powerful evidence to me that the Holy Spirit was at work, and I praised God. For three months we met and studied the Bible, and I was awestruck by the change in this man. Then I discovered that he wasn't a Christian but a Jehovah's Witness!! The point is I couldn't tell the difference between his life and a Christian's life. Supposedly it is only Christ that can change a person's life this way. This happened with quite a few people I knew who turned out to be Mormons, Christian Scientists, etc., and I began to notice how much more sincere and caring people from other religions were compared to Christians. This struck me as being very wrong, but I would push the feeling down such was the fear of hell that had been drummed into me.

A year or so on and I turned up at house group to an atmosphere of crisis. By their reactions, I thought something terrible must have happened to a person we knew. It turned out that one of their number had come out as gay -- the same person who had lead me to the Lord... a nice guy. I thought , so what he is gay? That shouldn't be a problem. After all he is part of this group of people who see him as their own brother, right? - WRONG!!! Over the next few weeks I watched as they all turned on him in the most disgusting way. I could scarcely believe it, and I felt feelings of intense anger, sadness and deep and profound disappointment at how shallow this "unconditional Christian love" was in practice.

Over the years, the way I was kept at a distance began to wear me down. I wanted to belong but they would have none of it. I was always told that there was sin in my life because I was uncomfortable with the "because the Bible says so" dogma. They would use this to justify their indifference in the face of need and suffering. I would ask too many awkward questions when I should be submitting without question to those in authority over me. For example, when Jesus healed the man born blind, he said that he saw people walking about like trees. How did he know what a tree looked like he was born blind? When the women went to the tomb to embalm the body of Jesus, they wouldn't have known that an angel had rolled the huge stone away, so how did they imagine they would shift it themselves? Where is it actually written that the BIBLE is the word of God? What about all those prophesies about Jesus that don't actually exist in the Old Testament? If God was the father of Jesus, why did the gospel writers go to such pains to record the genealogy of Joseph? All this questioning was judged to be "sinful rebellion" and with my Alice Cooper sense of fashion, it meant I couldn't be accepted into the fellowship.

Eventually I submitted. Off went the hair and out went the clothes and you know what? It didn't make a damn bit of difference.

Christian TV came to the UK and after less than an hour watching John Beveare and Steve Hill I didn't know who God was any more which was the start of my slide into depression which would lead to my suicide attempt. I was twice made homeless by evangelical Christians - one of whom stole my property, forcing me to find legal help. His response was to tell the most gross pack of lies about me saying he had no choice and smashed the place up. Then he would go out preaching "The Word." The other was the manager of a Y.M.C.A and evangelist who treated her tenant like filth and would throw out anyone who dared to stand up to her, and so for the second time my home was my car. Of course Christians would say they loved me and would pray for me, but were they willing to put a roof over my head till I could find my own place? Hell No! The exception to the rule was a dear Christian family who did take me in and whom I am still friends, but these were the only ones to to this in thirteen years of my being a Christian.

I noticed that the corruption and perversion of people in leadership was always hushed up, and the very ones telling others what to do were the most immoral people behind the scenes and would seek positions of authority to indulge their sick behavior. One such person was well known a serial womanizer both in and outside the church and threatened to end the marriage of my hostess if she didn't have an affair with him. The church wouldn't do anything, so I did something to protect my friend, and for my trouble I was hauled into the office and curtly told to go back where I came from, which proved to be the final straw to my faith. I had to know if Christianity was the truth or not. I would test the water by giving bullshit prophesies in church and "lo and behold," it would be confirmed - in tongues!!! I would lie and say I had received a vision which would be backed up by other Christians having the same vision -- Hallelujah!!! I would lie again and say I saw and heard angels in the meeting and ALAKAZAM others heard and saw the very same. Praise the Lord!!!

I am not so much angry at them as angry at myself for wasting fifteen years of my life being deceived. I am angry that I allowed people as wicked as paster John Brewster I spoke about in my last testimonial to steal my best teenage years from me that I will never get back. The opportunities I missed to go forward with my life, the women I rejected because I was told to - by men cheating on their own wives I later discovered - gone forever, i will never get those encounters back. I betrayed myself for the sake of less worthy men who took advantage of my enthusiasm for the faith.

What do I do now?

Thank you all for your kind attention.