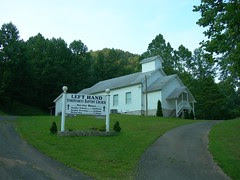 Sent in by Andy

I was born into a hardcore legalistic home school Christian family.
We went to the local Independent Fundamental Baptist church "every time the doors were open".

This was all fine when I was a little kid (age 9,10) because I did not understand any of it anyway, and it was normal to me because i was so used to it.

My parents, and their cult/religion believed in separation from the world. This meant no music, no movies, no TV, and formal "church" clothes everywhere we went. My parents believed that god speaks directly to the parents, and then the parents to the kids... I guess that makes parents god?

My parents beat and abused us and forced us into their mold.

They had absolute authority, and absolute control.

My parents followed the teachings of two people: Peter Ruckman (on churchy stuff), and Bill Gothard (on child raising, and stuff at home).

Although all this religious craziness was going on, both of my parents have P.H.D.'s and gave us a really good education.

Anyways, when I hit my teens I started to realize how truly screwed up all this was. All the abuse!!

I began to realize Christianity is a control/scare tactic. In my mind I hated it, but on the outside I faked it. Throughout all my teens it was like all out war constantly in my house. Constantly fighting with my parents, they would try and "discipline"/"beat the shit outa me", it was a really bad time.

I'm the kind of person that tries not to dwell on painful experiences in the past. But every time my mind wanders back to anytime I spent at "home" with my parents, it makes me sick. The kind of shit they did to me in the name of Jesus. They try and act like nothing bad ever happened. They will never understand how much emotional/physical abuse they caused , me, let alone even admit they were ever wrong. They are so so brainwashed by Christianity, it's unbelievable.

I sometimes think of how much different/better my life would be if my parents could have gotten over their crazy cult baptist religion and let me have the normal life I deserved.

One of my brothers stuck with it throughout his teens, and now he is exactly like my parents. He was always treated better, and favored though. I think my parents knew that I would never be who they wanted me to be.

The kind of things people will do to others around them (including their family, kids...) in the name of Jesus...

I'm very open minded towards other people's religions, ideologies, and beliefs, but if you're into a Christian "cult," please think hard about what you are doing to the people around you.