Never trust a politician, a banker or a churchman 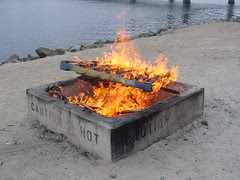 Sent in by John

It's seems that the underlying theme is always the same. "It was for God" or "It's His will". What a crock!

After 25 years of trying to devote myself to Christ, I have quit. The Bible that I was carrying for 31 years has been burned. I took it down to the local beach about 6 months ago and set it to ashes.

My first major shock as to the true character of Christians occurred when I was 18 years old.

My pastor at the time told me that I needed to be filled with the spirit and that I needed to learn to speak in tongues in order to grow as a Christian. Soon after that, I sat down with the pastor and a few leaders of the church for the grand event. We all prayed. Nothing happened.

In my mind, I was waiting for God to take hold of me and make this happen. I was perfectly willing to submit but nothing occurred. After the church elders left, it was just me and the pastor. I was informed that unless I learned to let myself be filled with the spirit, I could not grow in the spirit. Essentially, I would be stuck where I was and not very much use to the church.

I was shattered. I felt unwanted, not needed and in the way of the "real" christians.

About a year later, this same pastor was asked to leave the church. He was having an affair with one of the members of the church.

I wonder if his wife and two children were filled with the spirit?

A few years later, a very devoted, Christian girl I was dating needed some help. So I gave her a car. However, I had to deplete my cash and I had a few big bills coming up (taxes and fuel oil, about 6-8k).

I was very clear in that she would need to get some part time work to help me when these bills came due. When the time came for her to help me, she preferred to focus on some of her hobbies in her after work hours. Basically, she didn't even know who I was when my bills came due.

Finally, I woman I was engaged to had an idea to buy a plot of land for a business. The profits from the business were going to be used for charity work overseas.

In a nutshell, after a six month period of two full time jobs on my part to make a 30% down payment, the engagement was off and the money was gone. Apparently, her pastor had told her that we couldn't get married as she had been married before. Funny how this wasn't an issue before we got engaged.

I've been childish and too trusting. I'm a smart guy. I have an MS. I graduated with all the academic awards available for both my BS and MS. But my street smarts need work.

It's just that the only evidence I've seen of God is the eagerness of self appointed leaders to get their hands on His money.

Where is God when people claim His name in their evil?

My final thought is that God is not a testimony, He is an excuse.

I'll probably write more later. Just blowing off some tension. Thanks for the support you guys offer.