I feel like I've awakened from a drug induced stupor 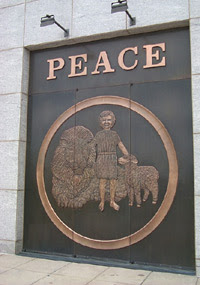 Sent in by Jody

My childhood was one of confusion, being raised by my RLDS mother and agnostic father. They married as a result of a whirlwind courtship during college, when my mom had sown her wild oats and dated this "heathen" non believer. She later returned to her conservative RLDS heritage when I was a young girl. (BTW: RLDS is a small, breakaway sect of Mormonism. It is now called Community of Christ, and happens to be very liberal). This was the cause of much division in our family, as my mom tried to "convert" my father. My dad was a great father, taking us camping and being involved in my youth group when we went on canoe trips and such. But I felt like what was missing was the spiritual dimension. I determined at a young age to marry a "priesthood man," and in my childish thinking, avoid the problems that plagued my parents. In my mind, God was something to be pursued at all costs. I gave my life to the church, to this belief in a God revealed in the Book of Mormon and worked hard to be "worthy" of being in Zion. "Of course, I never "measured up" and continued to emotionally beat myself up when I would fail. I did, after all want to please God and be a spiritual person and contribute to the ushering in of the kingdom. Early marriage to a priesthood member seemed to me to be the "ticket" to the kind of life I dreamed of.

I married Don when I was just 18 years old, and still in the last semester of high school. We had moved our wedding date up from June due to an end times prophecy that (obviously) never came true. I believed with all my heart in the teachings of Joseph Smith and the authority of the priesthood. But, one by one, prophecies did not come true and my confidence in the organization slowly ebbed away. My parents divorced (at the same time I married), and many other difficult events happened in my life made wonder where was the comfort of the Holy Spirit? There was much division in the church at this time due to conflicting prophecies and claims of priesthood authority. My husband took a new job, moving our young family 850 miles away from the only home I had ever known.

At first we were looking at it as an adventure, knowing that this position was temporary, and in two years we'd be back to our hometown. But here, without the support of the only social and religious network we'd ever had, we began to take an honest look at the church. We were welcomed into a small Bible study with some other homeschooling families, where we were exposed (for the first time) to the teachings of Evangelical Christianity. It was a slow process, but over time we left the teachings of the Book of Mormon and became Christians.

This was a difficult time, a time for stepping out of what had been my whole world and embracing a new way of looking at things. Our families (with the exception of my dad and paternal grandmother) were devastated. We spent many hours defending our position, and arguing for the truth of this new gospel we embraced. The next few years were ones of trying to figure out how to "do this" Christian life. I read every book I could get my hands on about Biblical womanhood, parenting, etc. trying to find the"formula" that would create this "heaven on earth" in our home. I worked at being a "submissive" wife, which was difficult for me, since I am by nature a very strong woman. I truly believed that Christ died for my sins and that God had extended grace to me, and I felt that I was the worst of sinners for having believed the lies of the Book of Mormon. I memorized the 5 points of Calvinism (TULIP), studied the Westminster Confession, and taught my children from the same materials. My self esteem was at the lowest for my entire adult life as I tried to "be spiritual" and raise my kids to know and follow the Lord, and purge myself of desires and dreams that were not in line with being a "submissive wife." My husband and I also became involved in ex-RLDS group aimed at evangelizing our family and friends still in that organization.

Well, life happens. I was determined that Christ had the answers to life's problems:
When I was lonely in my marriage, I was told to find comfort in the Holy Spirit, when I spent sleepless nights by the hospital bed of my sick daughter, I was admonished that maybe this is just "God's will" and I would need to accept. When I asked theological questions that had no answers, I was told to have faith. In a word, I felt like I was told to not think, not feel and or have needs. I constantly berated myself for not being able to measure up and have the faith I so desired.

A few years ago our family was going through one crisis after another. Our teenage son had turned rebellious and run away twice, and our daughter was in and out of the hospital, confined to a wheelchair and the medical establishment had little in terms of help for her. It felt like everyday it was a chore just to move through the day. I clung to my faith as troubles crashed down on us like waves upon the sand. We managed to survive the upheaval in our family, and life began to take on a new direction as our son came back to his senses and our daughters health improved.

Although the seeds of doubt had been sown awhile back, with all I had to manage on a daily basis (6 kids, homeschooling, health issues, hospitalizations, etc.) I gave myself little time to actually THINK about things. Last year (2008) my daughter discovered the raw foods diet (www.bethanysstory.com) and decided to try it as a way of dealing with her continuing health crisis. At this point she had been in a wheelchair for 3 years due to a tetanus shot reaction and various other chronic illnesses. We had sought the very best medical help, but with no improvement. This seemed so simple (eats lots of raw fruits, veggies, nuts and seeds). I figured, hey it can't hurt and maybe we'll both lose some unwanted pounds. On March 2 2008 we embarked on a journey that totally changed our lives. As her body slowly began to respond to the amazing nutrition she was receiving, we both noticed an increasing awareness, a "spiritual" awakening, a desire to be close to the earth, to be in the sun, to walk barefoot in the grass. I felt like my eyes were opening for the first time to the world around me. I started reading books by Melody Beattie and Louise Hay as a way of personal emotional healing. Gradually, I allowed myself the option of questioning the spiritual life I had been practicing for 20 years.

By the end of summer, her health had been completely restored, walking, dancing, and enjoying her life as a new person. My heart was open to meditating, and other practices that helped me develop a new way of moving through my life with more awareness. One Sunday I decided to stay home (What? My husband was not happy). Eventually it was every other week, until I could not bring myself to sit under the influence of the negative sermons and worship of a deity that I could no longer believe in.

It's not the end of the story, though. Being able to think freely, question, learn about this amazing world are all things that feel so refreshing. I feel like I have awakened from a drug induced stupor, to find that reality is indeed much better than fiction.