Glad to be an English Atheist with my mind intact 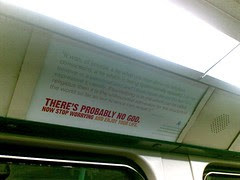 Sent in by John

Looking through this site, I see that most of you are American. In England, religion doesn't play such an integral role as it seems to in the USA. However, it is just as pernicious.

I became a Christian at the age of 15 (I am now 43) when I was 'evangelised' by a Charismatic, Pentecostal church. At first, everything was great. I believed that I had found the answer to life, the universe and everything. I read my Bible diligently; I witnessed to all at my school; I prayed and I studied Christianity.

Studying Christianity was my downfall.

The more I read and studied, the more I became confused. I was hearing one thing in church (God is love) and reading another (God commanding the slaughter of children and animals). To cut a long story short, the more that I questioned what I was learning, the more exasperated the church became with me. I was told over and over that I was allowing the devil/ the world/ my mind/ to control me and that i was sinful/ willful/ faithless etc.

Eventually the youth pastor of the church decided that I needed to be 'handed over to Satan' and I was forthwith excluded from the congregation for three months because I was too questioning.

The people that I had come to regard as my friends and family crossed the street to avoid me. During this time I was again evangelised by another church. This church was regarded by the local churches as something of a cult because they lived communally and shared all worldly possessions, but to me they were God's gift. They were everything in a church that I wanted. They were 100% dedicated to God: No TVs or radio; no flirting; out evangelising to the homeless, drunks, drug addicts and dropouts; AND they took them all in. They accepted me as I was -- a questioning youngster who wanted to serve God. (I was about 18 at this time.)

Unfortunately, my questions about the Bible, etc., proved too much even for them. Things soon began to go downhill.

Eventually I drifted away (helped along by being told that I was going to hell because God had supposedly told this to one of the elders in a vision).

Looking back now, I have to laugh at the stupidity of it all.

The ironic thing about it all is that most of the people that I once knew as 'brothers' are now religionless, backslidden, or dead. (Some committed suicide.)
Meanwhile, I'm still here, questioning and happy, and godless.