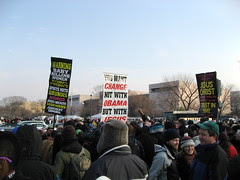 I was raised in a fairly liberal Southern Baptist Church. We allowed women to be deacons, and were disbarred from the SBC. I grew up only hearing sermons about Jesus and God's love. God was tolerant, and loving and forgiving.

I was really passionate about being a Christian in High School. I even felt like God was talking to me at a Church camp in 2001. Then 9-11 happened. I would hear all the time about how Islam was a religion of hate, intolerance and murder. I still believed that Christianity was peaceful and loving, and that Islam was hateful, and a lie.

Then one day, my youth minister told us a story about God commanding the Israelites to kill every Canaanite when they came into the promised land. He said we should trust God and follow his plan. He went on to say the Israelites spared a Canaanite king and that God was angry about it.

The king they saved was supposedly an ancestor of Mohamed. My Youth Pastor was basically saying that if God was obeyed, Islam would not have existed. What was shocking to me was that killing in God's name is in the Christian Bible, yet we never hear about that in the news.

I went on to a Christian College because I had already enrolled. The rest of my time there helped me realize how much of a lie Christianity really is, and how Christians never really address good points against their beliefs.

Christianity is dangerous. It makes people believe the world is going to end, and certain people are evil. It can cause leaders of the world to end the world believing it is God's plan. Evangelicals turn a blind eye to the atrocities caused by Israel on other nations because they believe God is on their side, and the other people are evil.

I am so glad there are other people out there that have been turned off by Christianity. I still love my church family, and still agree with most of their beliefs. There are good things about Christianity, and it made me who I am today. I hope more people will have the courage to finally stand up and declare that they don't believe. Don't feel pressured to pretend to still believe so you aren't shunned by Church friends or family. If they're really your friends, they'll still love you no matter what you believe. My Church does.