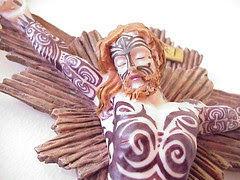 I am an ex-Christian from New Zealand, and while we don't have the same variety of ridiculous Christian offshoots, we have our own quirks (which everybody is obliged to "respect" regardless), such as a recent case where a 14 year old girl was killed in an exorcism where water was poured down her throat to cleanse her of demons. The religion in this case isn't apparent, but it looks to have parts of Christianity mixed with native Maori legends. The case is coming to a close, and the defense of the "divine healer" appears to be one of "she truly believed in the healing power of water, and who are you to judge?" It will not surprise me if the judge acquit him.

And this is a part of what drove me away from christianity - the fact that no two people can agree on a wholistic definition of the religion. Some take the bible literally, others "interpret" it with the guide of the "holy spirit" (ie use their conscience to ignore the parts that are too abhorrent for them to deal with). From what I've seen, modern christianity isn't as much about following the bible, as it is about enjoying a sense of community that is loosely tied to a collection of stories that aren't even consistent within themselves.

I guess this is part of the attraction, but also a big part of the problem - there are an abundance of churches, but not many athiest community centres, and christians who know from the start that they can ignore parts of the bible that they don't like are much less likely to bother to actually attempt to define their beliefs (or like my friends, don't have the "faith" to read more than a few pages of a book such as the God Delusion).

As for my journey, I was a gifted child with a strong biblical knowledge (which eventually is what enabled me to reject the religion my family imposed on me), and grew up closely tied to the church, becoming a leader in the youth group (which let me see first hand how orchestrated the guilt-trips are at christian youth camps), to finally leave the church only this year (after numerous guilt trips to come back and help out and to "stop being silly"). What worries me is that although I am only 20, I have still wasted 20 years of my life on something that doesn't exist.

And now? I'm an atheist. I remained a christian when it appeared to be the right thing, but after opening my eyes to how ridiculous all religions are, I think it's safe to assume that there isn't a god (although in practise atheism and deism aren't that different, I figure fully rejecting god is a much stronger step to make).