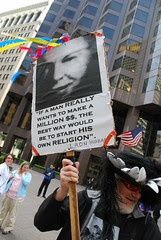 Through most of my life I was sure beyond doubt that god was real and that he had bought me as one of his own through the blood of Christ. I could not have conceived that one day I would lose my faith completely and come instead to believe that god is nothing more than a human invention. Indeed if there is anything that stands out about my story it is not the process by which I lost my faith but how far I have come in the journey from utter faith to believing that religious faith is nothing more than willing self deception.

It seems almost inevitable that I would become a Christian given the environment in which I was raised. My mother’s background was in the holiness revival movement and my father grew up in the Pentecostal Assemblies of Canada. My parents and both sets of grandparents were deeply religious and very involved in their churches. Among my extended family were a minister, relatives who ran a children’s ministry and even one of those wacky zealots who plasters his car in countless Christian bumper stickers and looks for every opportunity to make new converts. We attended Sunday School and church faithfully every Sunday morning at a Pentecostal church and more often than not we attended the Sunday evenings revival service too that always ended in an alter call with “every head bowed and every eye closed” as the orchestra quietly, and unimaginatively, played Just As I Am. Those Sunday services were supplemented with midweek prayer meetings, bible studies and summer bible camps.

I got saved kneeling alone beside my bed following one of those Sunday evening services and although I was quite young it felt very real to me. I waited until my late teens to get baptized in water and a year later I had the Pentecostal Holy Spirit baptism complete with speaking in tongues. My faith took off with a newfound zeal. For years afterwards my prayers were fervent, long and peppered with tongues (glossolalia).

I was in university at the time and threw myself into all things Christian. I lead bible studies for Intervarsity Christian Fellowship, headed the IVCF campus prayer group, sold Christian literature in the student union building and spent all my free time with like minded believers. I invested hours in prayer either with friends or alone on long prayer walks with god. Other than textbooks, my reading was all Christian themed. I read the bible through several times in different translations, sometimes cover to cover and sometimes following a study guide. I read books on apologetics, faith and Christian living, books on how to win converts, biographies of great believers and stories of missionaries doing god’s work in exotic places with all manner of incredible miracles in answer to their prayers. I found it all fairly intoxicating.

In large part through my readings I was drawn towards missions with an equal interest in both Youth With a Mission (YWAM) and Wycliffe Bible Translators. At some point after my interest developed my mother told me that she had almost joined Wycliffe before getting married. I discovered, after we had started dating, that my first girlfriend was the daughter of Wycliffe missionaries, and to top that my second girlfriend was a linguistics major who joined Wycliffe and went to West Africa to work as a bible translator. With all those influences it is not surprising that I quit my first full-time job to volunteer for a winter at Wycliffe’s Canadian head office in Calgary.

In the spring of that year I enrolled for a semester of study at Wycliffe’s Summer Institute of Linguistics with the thought that I might join Wycliffe fulltime but on my way to the school I stopped for a week as a guest at a YWAM base in Pasadena CA where a woman friend of mine was a student. I had visited other friends at the same YWAM base in past during a break in their studies. This time classes were in session and I was invited to sit in. I was impressed by the teaching and the eager attitude of the young students. Wycliffe felt a little stodgy in comparison. YWAM had more in common with the Pentecostal church in which I was raised while Wycliffe was more like a conservative Baptist church.

I began dating my friend from the YWAM base and a year later we were married.

Early in our first year of marriage YWAM’s ship the Anastasis dry-docked in Victoria BC where we were living, and remained there for about a year until YWAM could raise the money needed to finish repairs. (Incidentally the Anastasis was originally christened the Victoria so there was something apropos about its long stay).

We soon got to know some of the ship’s staff, which inspired us to quit our jobs and join YWAM. Over the next sixteen months we attended a YWAM school, worked on staff at a YWAM base and went on three outreaches, but we had no financial sponsors so we left YWAM when our savings were nearly exhausted.

From there we started attending a Vineyard church that we had heard was very dynamic. We hoped that we might get directions from god and maybe also convince the church to sponsor us as their missionaries. We got involved in a home group and went to various Vineyard conferences that were as far afield as Anaheim CA and Edmonton AB. We also took it on ourselves to promote missions in our local Vineyard church but after about three years we came to realize that the church was inherently inward looking and insular. There was a feeling of self-importance amongst the people because they believed they were at the focal point of god’s work in the world so they had little interest in anything beyond their own walls.

We moved on from there to an evangelical Anglican church that had a large core of creative people, including artists, musicians and actors. It was also much more intellectual than any church I had encountered before. Several members were students or staff of a nearby evangelical seminary. Others were doctors or lawyers and quiet a few people had post graduate degrees.

The Anglican Church was far more outward looking than the Vineyard. It had an overseas mission program and local works such as co-sponsoring a soup kitchen. We again took it on ourselves to further promote the cause of missions within the church, this time with the encouragement of another couple who ran a small mission that provided low tech solutions for food and clean water in Africa. We found a more receptive audience than at the Vineyard but still no sponsorship. The church already supported its own denominational missions and wasn’t interested in also supporting independent missionaries. Even the couple that had been there long before us received only negligible support from the church.

We were very active in that church for almost a decade. I served on the church board and lead a home group, and we participated in many church activities. Eventually though the church started to change flavor under new leadership and a large number of the more artistic people and seminary students soon stopped attending.

We stopped going then too. For a while we made a half-hearted stab at attending a different Anglican Church that some of our friends had moved to, but we never felt at home there, and in any case by that time I was seriously questioning my faith. It has now been about five years since I last attended church.

I can honestly say that our years in the first Anglican Church were a very positive experience for both me and my wife. We felt very much at home, very much accepted and we made many friends. Yet it was during those years that I began to lose my faith.

I didn’t lose it due to any hurt or disillusionment but rather through the influence of the intellectual environment around us. I was exposed to ideas that I had given little thought to before. Things like: How were the books of the bible chosen? How are conflicting manuscripts reconciled? What did the early church fathers really believe? Why do the gospel writers sometimes quote from the Greek Septuagint where the meaning is different from the original Hebrew? These and many other questions began to cast a shadow of doubt on my faith.

In past I would have suppressed questions like these through heartfelt prayer and bible study but in this church I felt the freedom to begin to question what I believed and why. I now think that part of the reason believers in fundamentalist churches cling so tightly to even the most peripheral aspects of their faith is that they have an unspoken fear that if they are wrong in one small area then their whole faith becomes suspect. I like to think that I am proof that this fear is justified.

Today I am a full fledged atheist and have read Richard Dawkins, Sam Harris and Christopher Hitchens. When I see the contradictions, absurdities and sheer brutality of god in the bible I am amazed that I could have been blind to it all for so long. I have become aware of the stark differences between the Jewish teachings of Jesus and the new religion, modeled on the mystery religions, that was launched by Paul, and I have learned of the many parallels between the life and miracles of Jesus as reported in the gospels and the stories of many other ancient religions, especially those of Egypt.

I have found that it is difficult for some Christians to accept my story. Some think that I have simply wandered from god for a short time and that god will bring me back, but my question to them is if I have turned and renounced god to this degree, have I not committed an unpardonable sin against the Holy Spirit? Others think I must have been mistaken in my earlier faith and never really a true believer in the first place, but if that is true then I would wager that the vast majority of people who think they are true believers are similarly misguided, including among those who hold such a view. I was saved for most of my life; now I am recovered from being saved. That’s my story and I’m sticking to it.