Religion has passed it's prime 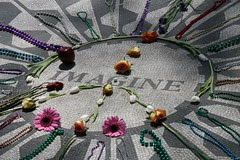 Growing up in the Deep South, I got birds eye view of religion. To be specific, Baptists.

My parents divorced before I was cognizant of the world beyond my mobile and my testicles. My mother's mother was a good grandparent, but not a very warm or outgoing woman -- not mean, but not one to go too excessively coo. My father's mother, who was the polar opposite of my other grandmother, was the stereotype of the southern granny: great cook, loved to spoil children, and had more love in her heart for he kids than possibly anyone ever before. Anyway, I spent a great deal of time with her from the day I was born right up until her passing last month. She was also a Baptist. (I do want to state here that my verbal onslaught on Christianity is by no means directed at her.)

Outside of my Grandmother carrying me to Sunday services as much as she could when I was very young, as well as when I stayed with her on vacation later in life (after my mother and I left the town where she and my father lived), I was not what you would call "brought up" in a church or a religion.

My mother, being a fairly liberal and permissive woman (she came of age in the sixties, AND was the child of cold, "by the book," parents), felt that it was up to me to seek faith. She never came right out and asked my young mind if I felt that there was a greater power, or even if I wanted to attend Sunday school. If I wanted to, she would have taken me, but as it stood I never asked and we never went.

I was left to my own vices to ponder the mysteries of the universe and the infinite and myself in the infinite. Most of the time I opted for cartoons and X-Men action figures-- it was all I needed. As I grew though, I would begin to consider the sermons I got when I visited my grandmother. Even as an unbiased child of 10 or 12 I would see the pastor and the things he said as being completely full of shit. It just did not make any sense at all as far as I was concerned, but neither did math. However, I know that that those mathematical equations, when done right, were ALWAYS correct. That's wasn't the case with religion, which is rarely done right and is never correct.

The years passed and my dreams changed with the millennium from wanting to be a doctor to wanting to be an artist and filmmaker. So now as a young man of 24 years I have taken a firm stance against religion as a whole. Religion has passed it's prime and worn out it's global welcome as far as I am concerned.

At the age of 24 I am in failing health (born with a condition called Neurofibromatosis, where tumors of various sizes pop up at different places on and in my body. I have some of tumors on my optic nerves which are rapidly robbing me of my vision and several tumors along my spine causing me constant pain). I wonder: Why would a just God...?

So, in my mid-twenties I am a foul-mouthed cynic. Walking with a cane, and addicted to pain meds, I am not a very pleasant person to be around. My contempt for religion has been pretty steady for awhile now, and at my Grandmother's memorial service the preacher, who had promised my father and I that he would give an uplifting talk to encourage the grieving family to remember the life of our departed loved one, decided to slip in a sermon about if you are good, as she was, that you will go to the great beyond and walk along side...dot dot dot. (This was nice. It was good. It truly did good for my cousin who is "special" and in her 30's with the mind of a nine year old, who lost her father, my uncle some years ago, to think that her grandmother was with her father and grandfather.) But the preacher did not stop there. He opted to give the other side, that if you are bad (something that does not pertain to Grandma at all) that you go to hell. And he drug it out to a spiel about Satan. Is that necessary at a funeral? I should say not.

I say now that in a world where all its people drop their faith, it may have a rocky start- but it is the first step to a Global Utopia. Religion as a whole (any and all) has done more harm than good. People lie. cheat, steal, manipulate and murder in the name of a deity.

I think the great John Lennon put it best when he said "Imagine there is no Heaven, above us only skies, no hell below us. Imagine all the people living for - today..."

Thanks for your time. There are very few people who share my opinions here where I live, and I really needed to share some of my viewpoints.