The Question They Couldn't Answer 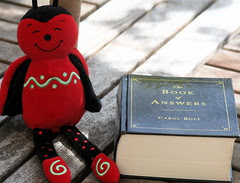 I was raised in a mainline Protestant household. We said grace, had an Advent wreath, went to church every Sunday, etc., but my parents were not overly heavy-handed. Church services were low-key, with the preaching and lessons geared toward positive things--emphasizing God's love for us, how we should love one another, God's mercy and kindness, and so on. I really never knew the negative aspects of the Bible until I was in my twenties and decided to read the whole thing, cover to cover.

It was an eye-opener for sure. I remember in particular the story of Job. In our church, Job had always been portrayed as a heroically faithful man, remaining true to God even when life dealt him the severest of blows--and being recompensed by God for the strength of his devotion.

So it was rather a shock to get the whole picture. God makes a bet with Satan that no matter how much crap God dishes out, Job will keep coming back for more. In cahoots with Satan, God heaps the shit on Job, taking everything the poor guy has--including his kids. Whoa! What was that? It wasn't *life* that dealt these blows to Job, it was...God! Let's just say it was a WTF moment.

Then, having won the bet, God makes good by replacing all Job's possessions--including his kids. Another big HUH? You can't "replace" a lost loved one by having someone new pop in. They're unique individuals, and God is acting like he's just giving Job a new muffler or something. Even we puny little humans can recognize this, but God can't? What kind of God doesn't know that? What kind of God acts like that?

After that, the question of suffering remained always in my mind. I asked many a pastor, religious counselor, and faithful Christian why a loving god would allow people to suffer, and got one of two answers:

"We don't know. It's a mystery, but God does everything for our greater good, so we must have faith in his ways."

"Because God wants us to have free will, he cannot force us to always do good. Unfortunately, some people choose to do evil things and make others suffer. But God has promised that we have free will, so he cannot intervene because he never breaks his promises."

Answer one never really cut it with me. I failed to see how child molestation, murder, traffic accidents, tidal waves, and such, could be for anyone's greater good. Plus, if it really is for our greater good, why doesn't God explain to us how that works? Why does he let people live on brokenhearted and devastated when he could console them by telling them what that greater good is?

Answer two I could somewhat buy. It is true that evil people have as much free will as good ones, and sadly, that does mean that there are innocent victims. Not very consoling, but it made a certain kind of sense.

Then my world changed, and I asked the question no one could answer.

At age 38, I became sick and was diagnosed with a hereditary illness. Medication helps, but I will never be well again.

This is a whole different aspect of suffering, and I wanted to know WHY it was happening. I wasn't even interested in wondering what greater good could come of it, having disposed of that answer long before. What I wanted to know was, how was my illness the result of someone's free will?

My parents', for having had sex at that particular time that I was conceived? Not only is that nonsense--since they couldn't choose how their DNA would combine--it's unbelievably cruel to extend to them such a crushing burden of guilt. Besides, my parents loved me, and no loving parent would ever want their child to have an illness.

Adam and Eve's free will? Why should their decision to eat the fruit have any impact on my genetics? Why would God hold against me, something that two characters in a story written thousands of years ago decided to do? What kind of God does that?

I read voraciously, I asked all the so-called religious experts, I thought about it till my head ached.

Finally, one night, lying in bed with my brain chasing its own tail, I had a moment of clarity. The REASON I had an illness is because my parents were trying to have a baby. They had sex that particular time when my mom was fertile, the sperm met the egg, their DNA combined. All in accordance with NATURAL LAW, not the will of some Being in the sky. It happened...because it happened. It happened because Nature is random. It happened because that is the way the Universe works.

The remaining scales dropped from my eyes at that moment. No more metaphysical search for meaning, no more trying to make sense of the good god/suffering conundrum. Only the clear, obvious truth.

Some people say that this realization devastates them. For me, it was liberating! I didn't have to run in circles any more trying to defend some mythical god. I didn't have to wonder what was the greater good that would spring from my suffering. I didn't have to search for meaning in my illness. I tossed the last remnants of religion overboard at that moment, and I felt a peace and certainty much more real than anything religion had ever given me.

While I cannot speak for those who have endured the terrible tragedies of abuse, loss of a loved one, and the like, I can say that the meaning of my illness and the good that can come from it are the meaning and the good that I myself impute to it. In the ensuing years, I have found that for me, the good that has come from my illness has been the development of the grit and courage it takes to live as normal a life as possible, and much more empathy for others--indeed, a willingness not to judge them because I don't know their whole story, just as most people don't know mine.

I do not hate religious people. Some of them are horrible, but most are genuinely trying to be good with the tools they have. Most of them simply can't fathom a life without their faith, and that's fine for them. But as for me, I found much more peace in letting go of the supernatural. Now I value every day for what it is, I work to give meaning to my own life, and I accept the hand that has been dealt me. Life is better, and despite my ups and downs with my illness, I can honestly say I am happier.