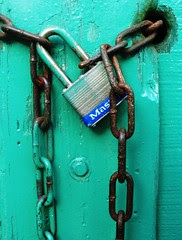 Image by Darwin Bell via FlickrSent in by Chris S

The process of de-conversion from Christianity for me as many of you may relate, was actually a very slow one. By slow, I mean roughly 15 years or so. I think that it may have happened sooner, but in hind-sight rationalized away or chose to ignore the things that were troubling me so. For years the thought of being labeled a “heretic” or “apostate”, brought guilt and quite frankly was afraid of hell. This site has really really helped me and am thankful for it! One of it's interesting distinctions is that we once were Christians. We had hopes, we had dreams, we loved Jesus, we walked the talk, we were “on-fire” at one time and know what that means. This site has helped me realize that I am not the only one facing de-conversion from a destructive religion, which even though may not be aware of it, enslaves minds and suppresses freedom to live happily without guilt and accusation.

I got “saved” at 16 in the Baptist church. Was totally on-fire for God. Lived and breathed Jesus every minute. Mission trips, leading fellow students to christ, church 3-4x/week, read the bible all the time. Felt the “call” to go into the ministry before graduating from high school and joined the military as a chaplain assistant to “lead fellow soldiers to Christ.” Started a radical discipleship group called the Navigators on post and continued to be a witnessing machine for Christ. Was involved in preaching and overseas evangelistic crusades regularly. Did this for several years while in the military and after I got out.

As I eluded to earlier, the process (de-conversion) was subtle. In some ways it was the “Christian culture/church” and also things I would read in the bible or learn about in theology. Too make an analogy, the process was more like getting stung by bees over time, until the poison took over. Early on one thing I struggled with, was that Christians were just annoying. I began to get irritated by their us-them attitude, like they were better than everyone else in the world. Slowly, I began going to church less without even realizing it, LOL. In time I got to where I just loathed “going to church”. I would just get mad at the way they would talk and act all spiritual and explain sensational “events” going on in their lives. On a theological level as I continued my studies in the bible, I began to objectively view the god portrayed within as a jerk. As an ex-evangelist I don't know how many times I scared people to Jesus. “If you hear his voice today, listen, because tomorrow may be too late and if you don't believe today and die in a car accident, you will spend an eternity in hell”. One verse/story in the bible has always bothered me...the parable of the talents. I always thought it was infinitely cruel and mean that if you don't serve and use your talent you will be cast into hell...now this is to a believer, much less one outside the faith. Never got over that. I could go on and on...and won't, we all have our own stories.

I'm probably more agnostic in my views now in all honesty. Heck, I still appreciate some of the things taught in the bible (i.e. The golden rule, good Samaritan, compassion, etc...). There is a lot of evil history in Christendom throughout the centuries, but do think some of the people within it are still honorable in what they may do, but you also see it in other religions too, such as soup kitchens, helping the poor, building hospitals and houses. Does God exist? I don't know. There are a lot of extraordinary claims he does, by people and what we read in the bible, but have reached a chapter in my life finally, where I am going to decide for myself. The culmination of this journey has been liberating! No more guilt, no more lies...just live, love and be happy. If after that and my final day comes and that's not good enough, then so be it.