I Took The Red Pill 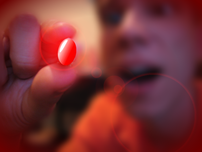 I didn't grow up in a particularly religious family. My father was a Harvard educated attorney, who just as the stereotype suggests, went to prison for a white-collar crime. My mother has her own unique ideas about the universe most of which consist of watching John Edward (the psychic, not the political figure) and hoping to make "contact" with her mother. My older sister joined the Baptist Student Union in college and proceeded to tell the entire family that they were going to hell (ironically, she's a lesbian now) which did not set well with anyone. I was only about four when this happened but it had a profound effect on me.

When I was fourteen I went to a crusade with an older friend of mine that I had met in a summer art class. Her father was the music minister at the First Baptist Church. I got saved that night. It changed everything in me. I became one of the most faithful, dedicated, annoying people on the planet, almost overnight. After a couple of years, it just wasn't enough and I started hanging out with my charismatic friends. By the end of high school, I had dated only two boys, remained a virgin, converted several others, pissed off countless more, and was headed for a life in the ministry.

I went to Dallas Baptist University for three semesters. I was never so lonely in my entire life. I hated it. I quit going to classes, and I started hanging out with a bunch of hippie guys that didn't even go to school there. I married one of them but that only lasted three years. I moved back home feeling like the ultimate failure. I had failed in marriage. I had failed God by not becoming a missionary. I had failed my community by not being the doctor everyone expected me to become. I plugged into church even deeper than before because it was the only thing I knew that could remotely take the pain away. Only, instead of dealing with it, I just pushed it aside in favor of the delusion.

I was a science kid so I always asked questions about the age of the Earth, and the more troubling question of "why is it fair that God would condemn people to hell for being born in the wrong country?" Those things bothered me on the one hand, but spurred my zeal to become a missionary on the other. One night I was watching a martial arts competition on ESPN and decided to look into Aikido because my ex-husband had talked about it. I fell in love. I found a new passion. And I walked out of church for the first time since junior high school. I spent a year and half studying Eastern philosophy. After a while, however, I missed my old church friends. And I went back.

The Beginning of the End

I had never really given up on God during my sabbatical. I just tried to push the thoughts away. When I came back, things were good for a brief while, but the nagging questions lingered. I had decided not to become a missionary because I didn't want to leave my church family. (And our pastor had developed a doctrine of no missionaries). The problem developed in ability to remain faithful to the group. I would go for a couple weeks then skip a month. This went on for several years. It's not that I didn't love them or love God, I just couldn't stay connected to them. I no longer felt the presence or the love of God anymore and it was killing me.

This past May I started hearing about a revival in Florida with claims of resurrections from the dead. I got excited again. I had to know more. I started watching the revival faithfully as it was broadcast live on television. I sold my Nintendo Wii and all my games and bought a plane ticket to Florida because I had to see it for myself. I spent three days camped out in Lakeland and going to every meeting available in a desperate attempt to find that feeling again. I must have been the only one in the room that was empty. I "pressed in" harder and harder and worshiped my face off but I got nothing in return. By August, the revival was winding down in the wake of allegations of fraud and adultery amongst the leadership. I started wondering if I had wasted my summer and questioning the "fruit" in my own life.

The Final Nails in the Coffin

I had been a part of National Geographic's Genographic Project earlier in the year. The results linked me to an ancestor who came up from Africa 40,000 years ago. I wasn't blind to the fact that science kept butting against my religious beliefs, but I tried to ignore it. I really started to play with the idea of atheism by October. I tried to hang on to church as much as possible, but I was getting no where with God. He wasn't answering me anymore. I stumbled on this site (quite literally, thanks Stumbleupon!) and started reading the testimonies of others like me. One stood out, though I cannot remember the author's name, he said something to effect of whispering that God wasn't real. It sucked the breath out of me because in that moment I felt the exact same way. It left me shaken. I grieved at first. It was like losing my best friend, the love of my life, the foundation my life had been built upon. I initially described it as the worst break up ever, but a death is probably the more accurate description. I started investigating the Jesus of history and realized that more than likely he is nothing more than a fictional character. There was most certainly a great deal of suffering involved in this experience.

At times, I wished I could "unknow" what I know, but in the long run my life will be better off. I'm no longer a slave to my imaginations, my delusions. The whole world seems open again. I'm working towards getting back into college to study astrobiology. I don't have to fear or ignore science anymore. I'm free to leave my hometown now. I haven't dated (much less anything else) in just over ten years because I had been told that boyfriend/girlfriend relationships weren't mentioned in Scripture. Religion messed up a lot of stuff in my life and it will take some time to learn to engage the world in a rational, reasonable way, but I'm excited about the future holds maybe for the first time in a LONG time.