My Story - Part 3. Prison, Chains and the Dragon 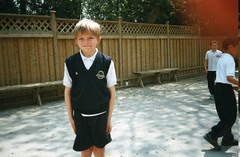 Funny how things work out sometimes. As I was getting ready to write this part I found my office (a local non-profit) was losing funding and we have to cut expenses. It was a three day weekend and I fell into a deep depression. Much better now though.

But what is funny is that the depression I felt I haven't felt in years. It was a deep rooted, not sure what to do type depression. The last time I felt this ways was when I was in church and not sure what to do with my life. I spent my whole church life this way. Of course now I am all sorted out and feeling better. Just got a shock at first when I got the news though it was expected. This is why the week delay in this posting.

After becoming a Christian and my parents “got right with God”, they decided I needed to leave public school and go to a private Christian school. I spent the 6th grade being picked on by bullies, falling behind on my work and piratically failing. It was a hard year for me and I barely got through it.

Then the next year came. During the summer the church (which met in the women's club at the time) decided they would start their own Christian school. In the late summer of '78 we took a test for a schooling program called A.C.E. It would be here I would descend into the prison of Christianity. I would be chained in strict belief systems (Catholics don't even come close) and somewhere in the darkness I would be pursued by an unknown foe, the dragon. The dragon would pursue me for years to come.

We began the 78/79 school year and I found myself in the 7th grade doing 4th grade math. My skills were way behind. However something happened this time around. Since the school program was designed to learn at your own pace I was able to not only do the work, but actually had good grades and didn't have to keep up with the rest of the class. I would fly through my work. I still think that this is a good way to learn.

But it wasn't all good. The school was very strict. One student had to take the bus to work and would always arrive ten minutes late. Even though he had a valid excuse, the attitude was “no excuses” and he would get a swat in the ass. Funny though that the pastor always had a valid excuse when he failed or made a mistake.

One guy named Howard, was the assistant principal and the youth leader. Part of the way through the year he and his family moved to Texas suddenly. Turned out he was involved with a couple of the teenage gals and not in a good way. I would find this out later and this would be one of the many lies and cover ups the church would have during my attendance.

We were required to be in church every Sunday. We weren't allowed to do much at all. No movies, dancing, TV worldly music and so on. Catholics had more fun than we did. Basically, eat, sleep, pray, read your Bible, and go to church. My parents did let me read The Hardy Boys. That was fun!

Since we didn't have a regular class room we were instead in one room K through 12th grade. There was little classroom instruction and we worked out of booklets called Paces.

On top of that the preachers kid (PK) would become popular and I would be withdrawn as usual. I soon became his stepping stone to being popular which would be a constant battle until I graduated 5 years later. To make things worse my brothers and sister would “rebel against God” and my family would always be treated bad as a result. I would try hard to fit in and belong, but to no avail.

We rented a campground for the first year. It was pretty cool really. One day the gals would go out in canoes and we weren't allowed in the area because they didn't believe in mixed swimming. But they weren't swimming, just canoing. We decided to hide in the trees off shore and watch. We got in major trouble and were given detentions. The detention slips were printed on mustard yellow paper and we soon discovered that if you pored bleach on them they turned a nice dark red. We had fun with that.

The school year dragged on and it finally came to awards night. Always the weekend after the last day of school.

As my parents walked in with me the pastor/principal would walk to my mom, smile and tell her he had a surprise for her. My parents took their seat and I would go sit with the class.

There was this collection of trophies and framed awards so it was pretty exciting. Stuff for Most Improved Student, Most Verses Memorized and so on.

It never fails, I always get to sit next to the most annoying kid who thinks he knows who all the awards are for. According to him I was slated to win them all that night. LOL

Finally the pastor got to a trophy for highest grade point average of the entire school. It was on a marble base and was silver with blue velvet on the front side panels with something (I forget what) on top also silver in color.

As I sat there the pastor bragged on how this student made a lot of progress and had the highest GPA of the ENTIRE school. There were kids in this school doing math 2 grades ahead of there actual grade so this wasn't an easy thing to pull off.

He finally called out the name on the trophy “Neal Stone”. It is important to note my mom had just gotten out of major surgery a few days before. She almost had to go back to the hospital. LOL My mom and step-dad both cried.

I sat there for a second then leaped out of my chair and over the empty chairs in front of me. I walked got the trophy and then sat there the rest of the night holding it so tight that I left fingerprints in the velvet on the front of the trophy. The finger prints are still there to this day. This would become one of my proudest moments as once again I felt I could do anything.

I am going to end here on this positive note. This is one of those moments I get teary eyed about.