Finished with that. Now what? 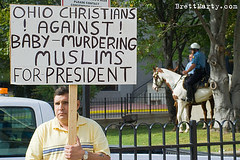 After 45 years in the evangelical church and culture, here I am, out of it! I'm not an atheist, and at best I am agnostic-lite, at least at this point. Keep reading, because at the end I will ask for your help.

My dad was a career Navy guy, and a heavy drinker. My mother and dad often talked about divorce. Then when he retired at 40 (I was 14), my mother became a born-again Christian, and when my dad saw the transformation, he too "accepted Christ". It changed my family profoundly, as he stopped drinking and their marriage was healed forever.

So we became a 4-times a week church-attending, fully-paid-up members of the evangelical church and life. We formed a family gospel quartet, I led the youth group, never drank a drop of alcohol or touched drugs, and was virgin till the day I was married (actually till the second day after the wedding, because we couldn't figure out how "it" worked quite!!) I attended Multnomah Bible College and earned a Bachelor of Theology, and then served as a missionary in Europe for 7 years. I have been a Youth Leader and Deacon in various churches.

It is possible that my very first seeds of doubt were planted when I attended Community College, and had a class in Introduction to Philosophy, taught by a brilliant, completely un-religious professor. And of course as we were taught in Bible College to always be an apologist and challenge secular, anti-religious thought, I did so with this professor, and he left me reeling with his sharp, almost-surgical dismantling of my shallow and ill-prepared Christian worldview.
But with C.S. Lewis as my favorite Christian "thinker" and author, I had no doubts that my faith was on solid ground. People much smarter than me had no problem with the veracity of the Christian faith.

When I returned to America in 1990 after 17 years living in Europe, the first thing that shocked me was the umbilical ties that the evangelical world had to right-wing politics and the Republican Party. I was quite comfortable with European socialism (eg., healthcare for ALL people, etc.), and could not see why American Christians were so narrow-minded, compared to European Christians.

That was the beginning of my exit from the evangelical church. With my brother and mother still right-wing republicans and evangelicals, I have chosen to not share with them my journey out. I always taught my sons to find their own reasons for believing or not believing, not just accept what their parents say. My two sons chose to leave the church before I did, when their honest questions about problems in the Bible during youth group were met with charges of "bad attitudes" from the youth leaders.

The main, key factor in turning me away, is the evangelical concept of hell. I heard a show on NPR, This American Life, featuring Bishop Carlton Pearson, who lost his mega-church and television ministry when he stopped believing that a loving God could send 99% of his children to eternal, un-ending torture, simply for a lack their consenting to accepting that Jesus "died for their sins." This pretty much reflected my own thinking. Frankly, it's a load of bullshit to think that Ghandi, Mother Theresa, and many other holy and completely unselfish people have been sent to hell by God and are wailing in anguish forever and ever. What earthly father would or could ever condemn his own children to eternal torture because they did not repeat a loyalty oath to that father?

I have stopped going to church. I am still a great admirer of Jesus, and believe that he did not live to start a religion called Christianity. And through the writings of Marcus Borg, Karen Armstrong and others, I have learned a whole new way to look at the Bible, and that John (as in the gospel) put a lot of words in Jesus mouth, that Jesus probably never spoke.

I know I will (and am) missing the caring community, the family, that is yours when you belong to a church community. I don't what or how to replace that. I haven't come to any conclusion about the existence of God or the place of Jesus in history. And I cannot deny that I have seen many lives transformed and given meaning by this "conversion experience." There is an immense, immeasurable amount of pure humanitarian work being done around the world, in the name of Jesus. (As well as a lot of hatred and killing being done in his name as well . . . does the name Bush ring a bell?) So while this faith is no longer true for me, at this point I am not ready, nor do I see the need, to commit myself to the faith of atheism, or any philosophy that states, "I know the truth."

What I would like, and maybe someone reading this can help out, is to meet with others in the Portland area who have experienced a similar exit from the church, just to talk. It's a scary journey for someone who is now 60 years old and started it at the age of 14.