I still haven't told everyone 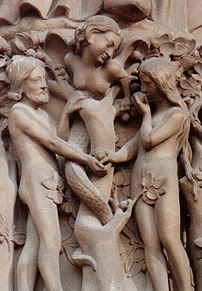 Image via WikipediaSent in by Ryn Darknight

I am going to be honest. This is very difficult for me to write as I am a very private person and I want to protect my family--all of whom are Xians.

Several years ago I thought I would undertake a study of evolution to determine if it is true. I began to realize from my studies that it is true and that if modern humans are at the very least 50,000 years old then the Adam and Eve story must be false. I continued my studies and found evidence for disease existing in the world before humans ever got here and that completely undermined for me the story of the 'fall' of humankind. I felt a great sense of relief because I had always been troubled by what I thought to be true--that God had cursed the world because of the sin of Adam and Eve. It makes me angry with myself that I ever believed this.

I had read the Bible through a number of times, and I always had a sense of disparity in my mind over the 'God of love' as portrayed by Jesus and the vengeful, often unjust OT God that Jesus claimed to be. I had often argued about these things in Sunday school, but the behavior of Yahweh was excused. It was considered okay by many I knew for God to wipe out the 'evil' people. Unfortunately innocent babies and children and animals were numbered among the 'evil'.

Once I realized that modern humans have been around for tens of thousands of years, I realized that the exclusive claims of Xty could not be valid. If there is a loving God, he/she must never have had an exclusive religion in mind because there has never been one in the history of the human race. I came to the point where I could not believe that God would wait that long to enter human history and then damn people to hell if they didn't believe.

The funny thing about Xty is that it still uses the OT which in a lot of cases directly contradicts the teachings of the NT.

I can identify with many of you who have posted on this site over the anger that you feel. I have been a very angry person at times over this and other things within the church. But, I also look at this as a very freeing time in my life. Sometimes it has been lonely, but I'm looking forward to meeting new friends. And hopefully, in time, my family will understand my reasoning and not be sad about my decision. I still haven't told everyone yet for various reasons.