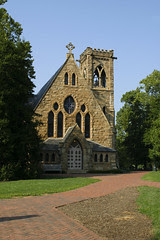 Image by beggs via FlickrBy Andrew

I guess I'm an atheist in respect to religion, but not necessarily to God.

Sure, I'm still open to the idea of a God or gods existing, but I know that the concept of God could not be accurately presented from any of the religions we have at our disposal. A personal God as espoused by our holiest books is something I have come to reject. I've even witnessed spiritual phenomena during the course of my life, some might even say supernatural, but fortunately I abstained from attributing these incidents to a specific religion, which is a mistake many people have done.

I grew up in a Catholic home: Filipino Catholics. Most people have heard of the zeal of Filipino Catholics, some of whom will actually go to such lengths as nailing themselves to a cross! I haven't seen such acts in person, but often at a Filipino funeral, someone will lug a huge cross down the church aisle just to get their point across. My mother, however, wasn't steeped in this tradition, and so I wasn't raised by the zealots of the Catholic faith, rather just the moderates.

Later on in my life, at about 14, my father, who is an American of British ancestry (since before the Revolutionary War) converted to Protestant Christianity, and it was through my father that I became acquainted with it as well. The brand of Protestantism that he converted to was Pentecostalism, known for preachers laying their hands on babbling parishioners speaking in tongues, falling onto the ground, and writhing in religious ecstasy.

My first experience with the "laying on the hands" occurred during a youth group session. At the end of his sermon, the youth pastor asked us to come up to the altar and be prayed for. It wasn't long until he began speaking in tongues and tapping people's foreheads. Naturally (or perhaps supernaturally), these normal, boisterous teenagers, began falling down and twitching like epilepsy victims.

I'd also gone up there to pray, but was a bit perplexed by the odd happenings going on around me, though I had heard about this in prior meetings. When the youth pastor started praying over me, I thought I felt a tremor in my knees.


I guess I'm an atheist in respect to religion, but not necessarily to God. He then laid his hand on my forehead and blew out a blast of hot air at me. I opened my eyes and looked at him, and he gave me a genuine look of surprise and took a step back. He approached me again and repeated the whole thing all over again. I didn't know what to do, because I didn't really feel like I had to fall down, and he stopped after that, moving on to someone more versed at what to do.

Admittedly, I almost passed out because of his breath, which reeked of halitosis and garlic. We eventually left this church because they began putting too much emphasis on speaking tongues, and were beginning to claim those who don't speak tongues will go to hell. "It's becoming too much like a cult," said my father.

So, we went on to another church that was part of a mainstream Pentecostal denomination, and it was called Calvary Assembly of God. As I had already been acquainted with the intensities of Pentecostal Christianity, all the erratic behaviors I encountered at Calvary were taken in stride. I really "grew in the Lord" at Calvary, became baptized, and began reading the Bible regularly. I was often found with my nose in the Bible, reading as much as I could of it.

I gained some great friends, and we regularly went on field trips, ranging from huge multi-church winter camps up in Lake Arrowhead, or surf trips with the youth group down in San Onofre. We'd become politically active and were involved in numerous pro-life protests and even one anti-gay counter-protest.

We'd regularly witness to complete strangers as well, as the Bible suggested we profess the Good News to all.

It wasn't until my junior year in high school that the first doubts crept in, and by this time I had moved to Lakewood, but would still try to attend church in Lomita as much I could.

None the less, there was a physical barrier of distance between me and the church I had grown to love. My parents divorced, I took my first hit from a joint, I had sex for the first time, got drunk, and other taboos were occurring regularly.

After committing or witnessing each sin, hellfire and damnation still seemed as far away as ever, and yet doing these things actually brought me closer to people, sex of course with my girlfriend at the time, and smoking and drinking with my friends, most of whom I am still in contact with today.

That said, I never really doubted the divinity of Jesus Christ at this time. Rather, it was the doctrine of sin that I began to doubt. How can these behaviors be evil? They were fun, they brought camaraderie, and sex brought on, for me at least, an emotional maturity that I couldn't have had should I have remained a virgin.

Another crack to my system of beliefs occurred while I was in the Navy. While overseas, spinning laps around the Persian Gulf in a brand new, nuclear-powered aircraft carrier, I would sit on the fantail (or the rear of the ship) and ask myself the old chestnut, "Why was I here?"

And not just in the philosophical sense, but also in the social-political sense as well. This line of questioning led me into an inquiry that caused me to question one of the things I had taken granted for so long, and that was that America was an "innocent" country. In 1998, we were still bombing Iraq on a regular basis. It seems that the decade between the first Gulf War and the second was more like a siege than anything.

The United States prevented supplies from reaching the desert nation, and we enforced a no-fly zone, all the while bombing various targets while we were there. This notion of America as the best country or even an innocent one, actually goes hand in hand with my religiosity, as it is in fact a symptom of ethnocentrism. I've learned that the reason that I love America is not because it's the best country, it's just that it's the one I'm the most familiar with, and is the one I have always called home.

After I got out of the Navy, I attended Cypress Community College and it was there that I took my first philosophy class. This class fed some of my suspicions that began festering in the back of my mind. This is where my doubts about the Bible's validity and divinity of Jesus really began to manifest.

Initially, I was a militant agnostic, and was very hostile toward Christianity. It's very much the same as when I first became Christian and became very anti-secular, anti-"other religions", etc. There is an initial fanaticism that occurs each time a new belief sets in.

Around this time, my father went on to become a preacher, and my mother converted to Protestantism as well. My father and I get into some very interesting conversations at times, as one could imagine, but we always engage in these conversations with respect toward each other. We still have these conversations, often when we camp out in the desert.

I never completely gave up spirituality, and so I actually turned to eastern religions for a while. Buddhism in particular drew me in, though I did find Hinduism to be quite fascinating, too. However, Buddhism is steeped in alien mythology, and I decided to extract from it the things I thought made the most sense. Ironically, this is actually advice imparted from Siddhartha Gautama himself.

In Buddhism, for example, I thought much of the philosophy behind it was quite sound, but the mythology was just ridiculous. Siddhartha's argument for extinguishing suffering is compelling, the thousand-armed goddess ... not so much. Meditation, too, is very practical, and can produce amazing spiritual insight. I have also learned through further Biblical research that the Old Testament is just influenced by numerous myths from Sumeria, Babylon, and Canaan, and that these myths were perpetuated by the Israelites, who had come out of these people.

If I were to sum up my personal belief, I'd say the concept of God is kind of like the mirrors placed in the upper corners of markets. They're not necessarily there to help store employees watch a theft; rather they are there to prevent the theft from happening.

When the shoplifter looks up at himself, he sees himself in a third person perspective, and the person he is seeing is a bad guy. Likewise, the concept of God is like an internal mirror.

This isn't even a new idea. Plato called it the form of the Good, Sigmund Freud called it a Super Ego, Christians and Jews call it Yahweh, and Muslims call it Allah. I just call it the "Ideal Self", which we strive to be like, and its standard is set largely by the society or culture we live in.

Similarly, there is a competing force, and this is our physical body's needs and desires. Plato might have called it natural urges, Freud called it the Id, Christians call it the Devil, and Muslims call it Shai'tan. I just call it the Animal Self.

The struggle between the two competing forces is basically the situation we are constantly in. I just drop the supernatural description and see it to be a natural part of being a social animal.