Where I came from; where I'm going 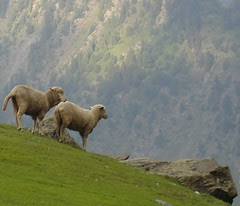 I was born into a devoutly Christian family in the Midwest 51 years ago. I can't honestly say I ever felt accepted in my family, or in any extended church "family". I always felt out of place, unwelcome.

I won't say that I didn't believe, but I think I always had some reservations.

My father for some reason had National Geographic magazines in the house, and I soaked them in. The info contained in them probably led to my first serious doubts about what I was being taught in Sunday school. I had lots of trouble accepting the six-day creation story, and a six- to eleven-thousand-year-old earth. Also, the problem of evil in the world, perfectly fine people supposedly going to hell, inconsistencies in "God's word", and many things similar to what many of you have stated before, all caused me much doubt.

But, I didn't leave Christianity or the church for another three decades. In fact, I married a Christian girl and had children, still remaining silent about my doubts. I was never able to "witness" to people, though, as I don't think I bought into the whole story enough to try to bring anyone else into it.

I wasn't a happy person. Rather, I was embittered, pent-up, etc. I had a near-death experience in 1986 and found my personality changing. I found eventually that I was unable to go along in silence anymore, acquiescing to everything around me.

Anyway, my wife found out accidentally about my as yet private thoughts about Christianity and the Bible, and that was the start of our troubles. We were never able to have an adult, open, productive discussion about my reasons for doubt, and that was the beginning of the end of my marriage.

The bad thing about the whole deal is: I have kids, and they have been indoctrinated (the same thing of course was done to me when I was small, but somehow it didn't take). I have been divorced now for 17 years, mostly estranged from my family (father, mother, brother, sister), and have had difficult relations with my daughters because I let my thoughts about Christianity be known. It's been hell, at times, and never really gotten THAT much better until maybe the last five years or so.

I have been reading this website for a number of years now, but never sent in my story. I've read many similar stories on here, and it has been a source of some comfort. One of the reasons I've waited so long, I think, is because, though I don't believe in Christianity or the Bible, I never really became an atheist either. I'm not a Deist, but tend to lean towards the Eastern religions: Buddhism, Zen, Taoism in thought.

Anyway, this is getting long, I think I'll stop there. : )