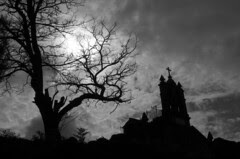 I just don't know. I have grown up in the church, I've gone to countless Bible studies, I've taken great leaps of faith, I've married into a very religious family... but it's all becoming kind of sick to me. There are so many things I question about Christianity that no one seems to have any answers to-- except "Have faith." Uh-huh.

My experience with Christianity has been one big emotional lie. Christians are hypocritical, self-righteous liars. A woman who led a Bible study for years, who introduced me to my husband, who was my spiritual mentor and best friend -- gets drunk every weekend and sleeps around now. My pastor was having an affair with a married woman in the church. My family turned against me in the name of God. "You have spirits of rebellion and deception all over you..."

But maybe I just don't want anything to do with Christianity, even if it is real. I have seen nothing from Christianity but hypocrisy, lies, and judgment. Christians stand on their pedestal and pronounce who is saved and not saved, what is right and what is wrong... They hurt more people than they "save." They live in their big houses, drive their nice cars, send their kids to private schools -- all courtesy of their blind followers. I would like to see one of them try being hungry or financially burdened. I would like to see one of them hurting, to know pain, to live a life outside of the protective church walls and see how they trust God then.

I'm at a crossroad in my life. Everything I believe and everything that has happened contradict. I don't think God is full of love. I don't think Christianity has any answers. I think the church is one big parade of self righteousness and judgment. I need REAL answers. Why is there pain? Why is there suffering? Why do bad things happen? How can God be so full of love when there is so much hatred in people? How can people be so purely evil if we are supposedly made in the image of a good God?