From hardcore Jesus freak to atheist 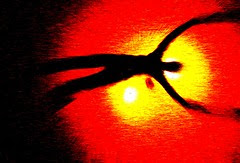 I wasn't just a Christian. I was a hardcore, Bible-thumping, tongue-speaking, over the top extreme Christian that other Christians wish they were like. I believed God literally talked to me. I believed God had a "mission" for my life. And I was ready to do anything, no matter what the consequences.

Well fast forward several years and traveling several countries to do God's endless work, and I burn out spectacularly. Christian ministries and organizations used me up until I had nothing left to give and then some. Finally like Icarus I burnt my wings and hit the ground hard.

I found that not only was God clearly uncaring to all my work and efforts for Him but chances are He wasn't even watching, or was and didn't care. There were no rewards for my work as I was promised. God wasn't there for me when I had nothing left. There were no answers, and the answers I'd give others when others were in pain just didn't work. God wasn't listening or indeed doing a damn thing. And fellow Christians told me that if my life had been thrown into the spin cycle, clearly I must have done something wrong, clearly I screwed up somewhere, or God was punishing me for some unknown sin or failing, or just for not loving Him enough, who knows.... after all we are talking about a deity that will throw you into hell for eternity if you don't choose to love Him back, right?

But clearly I was wrong about everything, because nothing I had been taught and believed made any sense whatsoever. It just didn't add up, like trying to put 2 and 2 together to make 5. Add the numbers as many times as you like but you won't get 5. That's what life became: an impossibility. Based on everything I was taught and believed about God, Christianity, church, the Bible, life, love, sin, right and wrong... it just. Didn't. Make. Sense.

Then finally I realized that the reason nothing made sense anymore was because clearly there is no God. That was the simplest, clearest, most obvious answer out of all the possibile conclusions. The contradictions and implausible, weak arguments and ridiculously flawed conclusions that consist of Christianity and any religion, they had been piling up in the back of my head all my life and I stubbornly ignored the facts and the obvious logic. This is already aside from the mountain of self-contradictions present in the Bible, and the oceans of additional contradictions in our various interpretations of it, something I had a hard time reconciling all through my life reading and studying it; trying to explain away to others (when I didn't know myself) why every church and sect cherry-pick the verses that suits their taste, why there's a verse to directly contradict every other verse; a myriad of scriptures directly refuting the established doctrine of every church denomination on earth, from the most orthodox Catholics to the wildest Pentecostals and everything in between. Let alone the simple lack of logic and common sense in the very basic story so far that even a child could point out in a matter of minutes of considering it.

Ultimately I realized I believed in God for the same reasons I used to believe in Santa Claus. Santa rewards you when you've been good but gives you a lump of coal when you've been bad. There's no evidence of his existence either, and the entire mythology of Santa is incredibly dubious, implausible, ridiculous and fantastic at best (traveling down the chimneys of every household in the entire world in one Christmas eve night? I'm pretty sure that violates the laws of Physics as well as common sense). The only difference is that children stop believing in Santa past a certain age. Ultimately there is literally no difference between God and Santa Claus, the Tooth Fairy, zombies, goblins, unicorns, etc. etc.

Bad things didn't happen because I did something wrong and God was punishing (sorry, "chastizing") me; good things weren't rewards (or in Christianese, "fruits") of good or right behavior. Wealth wasn't a sign of blessing, neither was poverty a mark of holiness. Things weren't "destined" to happen. God didn't have a will or plan for anyone's life. Guilt wasn't punishment from God or condemnation from the devil, just consequences of actions you don't feel good about later. Repenting of sin wasn't making me more holy; it was making me stupid and causing me not to learn from my mistakes and change on my own but rather depend on some external spiritual force to be a better person. Neither beauty nor tragedy required an explanation; neither did our existence itself. There's no meaning other than what we make. And we need neither God or Hell to motivate us to be good; we know why we should be good people already.

Becoming an atheist freed me of more pain and emotional baggage and confusion and frustraion than I have time to list. My journals documenting my struggles trying to figure it all out all the years gone by, they could fill a library. And once I considered that maybe the whole darn thing was all in my head, all that mental wrestling was over. And things are clearer and clearer everyday.

Life isn't significantly easier, but now I take responsibility for my own actions. When I see injustice or suffering, I don't go home and pray about it and assume God will take care of it; I realize I have a personal responsibility to make my part of this planet better within my own tiny resources. If anything becoming an atheist makes you care far more about others and the world around you, because you realize this is all there is. God's not going to save anyone, we're going to have to save ourselves and each other, to loosely quote a certain German band. If you want meaning, consider the quote: "no single raindrop believes it is to blame for the flood."

Sometimes the most obvious, simple answer really is correct.

I don't believe in god/s because the idea of god - an omnipotent, omniscient, benevolent god that's directly and intimately involved in our everyday affairs and decides where we spend our afterlife - simply doesn't make any sense.