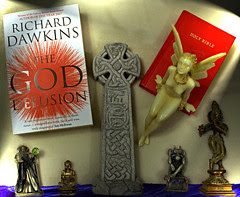 I've always been a rational person. Educated in math and science, you wouldn't find the likes of me writhing around in a church and speaking in tongues. But yet I believed.

Yes the Bible has some bronze age brutality - but those immoral atheists are just cherry picking the bad and ignoring the good, aren't they. Aren't they?

Perhaps I should read that book - that would make me feel better and inspire me. OK old testament maybe not the best place to start - I'll focus on the new, which absolves the old, doesn't it. Doesn't it?

9-11 pierces my slumber like a shrill alarm. The will of God to kill thousands of people - if only they would be Christian - Christians would never do anything like that, would they. Would they? It is because of the gays and the liberals? What?!? OK, fundamentalists are just twisting the message of love.

I then develop an interest in biology, start studying it formally. Evolution is beyond question, must be Gods plan. Why are those Kent Hovind (is he out of jail yet) people covering up the science. A true Christian would never lie, would they. Would they?

Seems to be some intelligent apologists out there, lets hear what they have to say. Logic 101. What constitutes a valid argument. Pascals wager. Problem of evil. God of gaps....

Red pill...gasp... choke... what? Where am I? What are all these twisted logic tubes hooked into me?

Well now just look at me - I seem to have popped out of the Christian matrix.

Its so sunny out here! The world is full of wonder and has so much to be discovered! I have more unconditional love in me than I ever had! I can do the right thing just because its the right thing to do! I haven't eaten my young!

Goodbye Jesus old friend, when you are ready to come down off that cross, I will welcome you with open arms into the loving kingdom of rationality.

Just don't preach to me or I will give you a copy of "The God Delusion" and lock you in a sauna for all eternity. Because I love you.