Everything over the past years started swirling in my mind 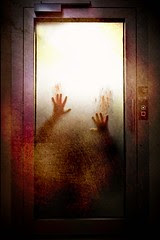 My struggle with Christianity began in the third grade when I attended a Christian private school in the city (my parents were working class, and I would ultimately move to public school with the birth of my second sibling, when funding private school was not longer an option). The curriculum novels (i.e. propaganda) described glorious close relationships with God, and I tried hard to develop such a relationship. However, when I prayed most devotedly, nothing happened. It didn't help that I found services sleep-inducing and boring; it also annoyed me that I felt required to donate portions of my meager allowance to the offering plate, which they passed around Sunday school, which I felt I could use on toys. "Jesus will touch your heart in his own time," the preacher would scream over the pews. I worried that he must not have touched my heart; if he didn't soon, I would go to hell! Hell! Hell!

Fast forward to my high school years in the country (my family moved to escape city crime).

My father was quite a religious man, in the sense that he read his Bible daily and tried to emulate Jesus (or at least the ideal thereof) by practicing kindness and tolerance. Coming from an extremely liberal family up from the urban north, a family by divorce and alcoholism in his youth, he spent most of his life fending for himself; I believe he had turned to Jesus for answers while keeping the unique insight of liberal parents. Like most Christians with an actual sense of respect for humankind, he practiced apologetics in reconciling, through abstract interpretation, outdated, violent, ridiculous verses in the Bible.

He didn't attend church on an even semi-regular basis, or participate in mandatory church-centric living, however, which is the only sign of godliness in rural areas.

Meanwhile, I began dating a very respectful young man from my high school whom I will call Rob. Later I would I learn that Rob's father, whom I will call Joe, had severely physically and emotionally abused Rob and his mother, Sue, throughout Rob's childhood, although at least the physical poundings had stopped by the time I met Rob. In her distress, Sue had taken to abusing sleeping and pain pills.

Joe was a diehard fundamentalist Christian attending a cultlike church I will call Mountain Side Baptist Church. Joe preached on occasion at that church, and often abroad at other churches member to the Southern Baptist Association (or something like that). Neither Rob nor Sue particularly enjoyed the church's vicious caste system, which consisted of two castes: an inner circle of extremists and the unsuspecting members whom were the source of fierce gossip for the superiors. However, I attended this church with Rob to keep him company; his parents required him to attend it on pain of heavy emotional abuse.

For those requiring proof of the absurdity of this church's philosophy, let me provide some examples.

1) A diabetic woman aged 45 became pregnant (I know, you would think a married couple of that age would know how to use a condom). Both she and the baby were at severe risk of death because the mother is physically unfit to carry or birth the child. Rather than pursue an abortion to save at least the mother's life, she has, unsurprisingly, announced her decision to become a martyr in the name of a couple mindless embryonic cells. The fate of mother and child are still 'in the hands of God'.

2) All alcohol is evil. Along with other local churches, they purchased an ad in a local newspaper denouncing the community wine festival, a controlled environment event which celebrated the history and culture of the area while stimulating the community's poor economy. They believe (quite falsely) that any positive references to alcohol in the Bible actually refer to unfermented grape juice.

3) The pastor believes his church, to the exclusion of others, pleases God. All other churches lead souls astray. He has warned departing members of the consequences on their souls. Of course, considering that he receives the entire offering at preaching, one wonders whether he worries low attendance would hurt souls or his wallet.

4) Women must not hold any authority within the church. Women cannot preach. Vaginas impede one's ability to understand the 'Word'; penises are the antennae through which God communicates with man.

5) All music but gospel is composed by the devil. Even contemporary Christian music is evil.

6) The preacher held a meeting with the deacons to humiliate a young girl whom he claimed had uncrossed her legs while sitting on the front pew as she reached to play with an unruly toddler. He said the resulting view distracted him. He actually admitted this to the deacons and they did not call the cops. I knew the girl always wore at least knee length skirts. Secret meetings of this sort happened frequently, with various underlings from the lower caste their subject.

7) Interracial relationships are ungodly because whites are superior (I learned of this little jewel recently). A black man came to church with a white woman. The preacher threatened to resign.

8) All translation of the Bible except the KJV were created by 'evil homosexuals'. Even though it is only a translation itself, the KJV actually came from God's own mystical hand.

Joe became an ordained preacher one month, which, for the revered position of saving souls, required little more than being a heterosexual male and deciding you wanted to preach. Joe, a high school drop out, could read; however, while one would never trust a doctor with less than a decade of expertise to deal with your body, the Christians would trust illiterate wife-beaters to treat their 'immortal souls'.

Anyway, Joe accepted a full-time preaching position at a different church, Stone Creek Baptist Church, which included a stipend of $500 weekly for the time-consuming work of calling people out on their sins. Joe mysteriously left his position. I pressed Rob for the reason. Finally, I learned that Stone Creek, a faltering church whose remaining regulars consisted primarily of elder women, allowed females to run the church's financial matters. Of course, this collided with Joe's fundamental belief that female hands tainted God's holy money, so he had no choice, as a good Christian man, but to leave the heathen place.

One day, Joe caught Sue popping painkillers and confronted her. Sue made an escape attempt. Of course, Joe is the classic abuser, completely defendant on the victim to affirm his self-esteem. Rob finally convinced Sue to return. That night, Joe cornered Rob and accused him of causing his mother to take pills. The preacher later called Rob to repeat Joe's accusation, blaming the child for the dysfunctional relationship of the parents.

However, the final blows from this demented religion came when a heart attack unexpectedly took my gentle father's life one night. Let me reiterate that my father, though a follower, thankfully stayed away from these cultlike churches. He drank beer, listened to rock and roll, and loved all people. He defended me against naysayers when I made teenage mistakes. He encouraged me to chase my dreams.

To save expenses, we cremated my father and had the funeral at the church, which didn't charge for the room like some funeral homes. I had spent many hours creating a slide show of my father; the background was a classic rock song he and I had loved and seen in concert together. I also created the pamphlets they give out at funerals; the inner right page had pictures of his favorite items on it, including a small icon of his favorite brand of alcohol.

The church censored my music with a stupid gospel song, completely ruining the climatic effect I had worked hard to create. They made me mark out the pictures of the alcohol. If I did not meet these demands, they said, they would not allow the DVD or pamphlets to enter the building. With the funeral fast approaching and my emotional state far from rational, I agreed to their demands. Needless to say, I stopped attending the church soon after the funeral.

The church members never called to check up on my family, although they had surrounded Joe upon news of Sue's addiction. They still had time to gossip about the cremation, which they considered ungodly. Joe continued to emotionally abuse Rob, blaming him for Sue's addiction and threatening to hurt him if Sue ever left again. I could not understand how such an abusive, vulgar man deserved life in the eyes of God when my tender, loving father deserved death. How cruel God could be!

I remembered staring at my father's body on the back of the ambulance as paramedics thumped his chest. Joe reminded me that Sue's pain was worse than mine (although I had not requested a comparison) and warned me that I had better not take Rob or people's sympathies away from her.

I remembered my father telling me of his dream to become a preacher. "Why don't you?" I asked. Tears welled up in his eyes. "I'm too sinful, too imperfect to teach others," he said. I was thankful he never became one; he didn't match up with the arrogant, righteous, you-owe-me attitude of preachers. He didn't know that the joy he felt for humanity was entirely un-Christian.

Age eighteen arrived along with high school graduation. Joe and I fled to college out of state, finally free of the cultlike abuse of the church and his deranged father. Secular college education began opening our eyes to a scientific, humanistic world where being human was not an evil thing, but a beautiful thing.

I worried, the old cries from the altar of hell ringing in my head. I faltered. I began reading the Bible and other religious, hoping to find something, anything. The Bible offered more than something: violence, intolerance, judgments. Why did the church condone that Joe beat and raped his family? The verses were there approving it. Why was it okay to disparage minorities? The verses were there approving it. Even the creation story popped out to me as ridiculous. Why the hell did God let the demon into his so-called garden of 'paradise' in the form of a talking snake, which simply panders to mankind's ancient fear of serpents? Why were females conveniently created from males as subhumans of sorts? The crucifixion was absurd. Why did God have to kill himself to appease himself? More importantly, if he loves us, why did he send us to hell?

For a construct that wanted to explain everything in the universe and assuage human fears, religion posed more problems to me than it answered. Everything over the past years started swirling in my mind.

I watched as fundamentalist poured outrage over recent homosexual marriage laws. I could not figure out why they cared if two people married and it had no repercussions at all for the church. I watched as they spent millions combating this, abortion, birth control. Why not help the downtrodden instead?

I reveled in the colors of the flowers as spring opened over winter. The sunset splashed pink and orange over the horizon. I marveled at the lightning tearing the sky in half. I laughed at friends catching up in good humor, both human and animal. Rob and I held each other in the morning, new light spilling in through the sheer curtains of the open window, and I felt love.