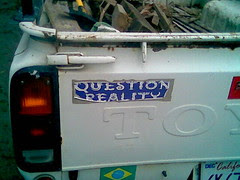 I was born into a strict Christian family that followed a cult-like version of Christianity that was similar to the Seventh-day Adventists, called the Worldwide Church of God. There was a heavy emphasis on the Old Testament and so my brother and I grew up in a pretty sheltered life, attending the church-ran elementary school. We didn't know better, as it was all we knew. Sure the occasional childhood 'why?' popped up, but there was always a bullshit answer that, coupled with the reassurance of our parents and our whole social bubble, there never was a reason to truly question the teachings. Besides, the bible said we were right and everyone else was going to burn in the lake of fire while we enjoyed eternal life. Man, what a sham. Eventually, in my rebellious teens I finally waved the bullshit flag when the church began to question a few of its prior teachings. I saw a crack in the facade of Christianity and began to feel real anger. I was told I had the devil in me and everyone tried to bring me back in the fold. It only pushed me further away.

Eventually I helped convince my parents and we stopped attending the church. It was a brave new world. We each had our problems coping. My mother had difficulty finding new friends, and my father became an alcoholic and gambling addict. I continued to have difficulty containing my rage. I saw a counselor my freshman year of college. He was full of bullshit as well. Psychobabble bullshit.

Over time we've successfully adapted. My mother found friends at work as she dropped her behavior aversions. My father stopped gambling and has slowed his drinking. I joined the military, attended pilot training, fought in Iraq, and once again find myself questioning my reality. The ability to question strongly held paradigms is one of the best things I've taken away from my experience.

It saddens me that people constantly need some sort of reinforcing structure to shape their world. When you consider the enormity of our universe and all of the possibilities therein, it seems like such a damned waste to drastically limit ourselves with obsolete religions. I'm no longer mad. I'm saddened for our collective loss, but that's just the way it is. One thing's for sure, life is certainly more interesting now that the blinders are off!