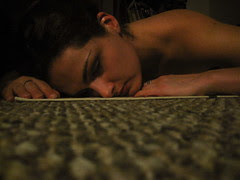 My family was never really very religious when I was growing up. My father would randomly take me and my two siblings to church, but he beat my mother so it's not like he was instilled with values. When my mom left him, we moved far away and she never made us go to church at all. My father's side of the family is very Christian and whenever we visited him in the summer we were made to go to Sunday school and church service. When I started making friends after moving to a new state, some were church-going. I would tag along with them. Eventually, I started going to one Methodist church in particular. Mostly because my friends did too. I then became baptized as a Methodist.

When you're younger, they never really talk about all the very important issues in the Bible that we encounter now in our everyday modern world. They just tell you Jesus loves you and that Ggod loves everyone and yada, yada. When I started getting older, I asked a lot of questions and wanted some answers, but always got the runaround. Also, when I was a preteen and teenager I was very overweight, and I think that because I was accepted as a person in the church, because I believed in the same things and had friends that liked me because I believed the same things, that it provided me with instant support. I was shy and didn't actually have many friends who I hung out with in school.

When I moved away for college, I began to really read the Bible. I still was going to church and attending retreats and helping out at a local Christian radio station. But, the things I was reading just did not seem very right to me. Who was God to say who could love whom? Why did the Christians not believe in evolution, and how is it even possible that God just spoke and all the animals ever known to man were there, ready for the world? More things really irked me, and I can say that was when I started to just not believe in these things anymore. I started to hang out with friends that had more different and open views of the world. Going to art college also let me explore other religions of the world and what other people had to say. I made friends with people that were gay or lesbian and did not believe that these people were evil in any way just because of whom they love. They are all nice people, having the same human imperfections as any heterosexual would have. I also lost A LOT of weight and no longer really leaned on that crutch of the church friends. They looked at me strangely when I questioned things and even became hostile towards me. They were all hypocrites, being my friends because I had believed in their god. They did not like me for me. It turned out that they were not true friends. Some of them were, and I still hang out or talk with them, but that's because they are pretty open about people having different views, and it was maybe two or three of them.

I moved back to my hometown and I occasionally see someone I went to church with when I was younger. They ask me why I don't go or ask me to go. I can't really explain an epiphany or waking up to the real world to them in passing, I just say "Well, nice to see you." and that's that. If they don't want to talk to me and understand that I have other things that important to me in life, then that is their own narrow view and I'm sure they can go on with their life and still be happy.

I consider myself to be agnostic now. I kind of like the Wiccan or Pagan views. I just like to think that we are just put on this earth to live life to the fullest. We don't need a text to tell us what is right and wrong and what can make us happy. Sure there are morals that are instilled within us, and there are things people do in the world that are not very nice. But to base your life on the fear of a god and to live your life around the fact of if he will accept you when you die just seems like a waste of time to me. If there is a god, or a higher being, I'm sure this being isn't worried about if you lied this morning or if Tom and Henry are getting married. We only get one human life, we need to live it to the max. We need to love and be loved. And we need to use our brains and study the world around us to draw conclusions about where we came from and how animals and plants got here, not some 2,000-year-old fairytale written by a bunch of guys.