Waking Up My Closed Mind 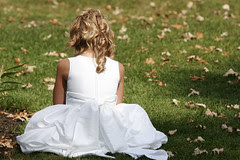 I know my parents were only trying to do what they thought was best for me, but I was in a kind of bubble. Since I never talked to anyone with a different opinion, it was really difficult to deal with the teachings in the Bible sometimes. I was terrified of going to hell and really didn't like the teaching of the bible. I mean, hearing that God sent a flood to cover the entire earth and kill everyone except eight people is not very comforting.

After short periods of doubt I would put my questions aside. No one had an answer and I had to get along with my family and friends, so I just decided this God must be good after all. In high school my parents let me go to a public school. I was in an art school with all of these people that were very open-minded and that got me to think about things again. That really didn't change me though because my family would always tell me I needed to avoid the false teaching of that school. I was only fifteen so I ended up siding with my parents and saw it as my "mission from God" to help lead people of that school in the right direction. I didn't preach to them or anything, but I made sure I didn't act like "one of them."

A few years went by and I felt like I was getting incredibly unhappy. I felt a lot of anxiety and I really didn't like myself much, but I didn't know why. I was at the point where you give it all to this God and in the process you start losing your real personality. I knew that I had a talent for art but I gave all of that up because I thought God wanted me to be a missionary instead. I guess I was just making myself into a puppet for God, whatever He wanted, went. I didn't even care about having fun anymore. The burden of trying to do everything God wanted was sucking the life out of me. I thought nothing would pull me away from my God, but this year I snapped. The doubt about the Bible haunted me again, but I was still to afraid to admit it.

Shortly after that I got to know this guy I thought was really cool. He was not a Christian, but he was really nice. Though I liked him he was pretty much in the "sinner" category to me. I believed he was going to hell because he was an openly gay man and admitted that he thought Christianity was too uptight. I didn't know what to do, so I started to pray for him. I carried on in my nonsense. He was very sweet though, and it was hard to call him a sinner. One day I think it just hit me. I looked at him and I asked myself, "Why am I serving a God how would hurt this nice person?" All of the sudden it was like my love for him and for others I knew were not Christian took over and I knew this God had to be false.

I'm now almost twenty and I would never go back to the way I was living. I read the Bible again, this time with an open mind, and I saw all of the contradictions, evil and just plain stupidity it contains. I hate that I wasted some time as a teenager, but I'm glad I got out of it at an early age.

I'm agnostic now. I don't have all the answers, but I'm happy anyway. Being free of Christianity is enough for me.