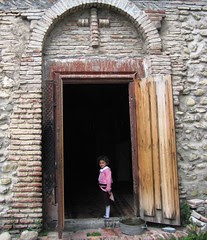 I've been following the stories on this site for a long time now and I'm finally getting around to writing my own. I can't say that it took me courage to hunker down to write this because I am actually quite loud and proud about my atheism. Apparently that makes me a fundy AND militant. And depressed, and sour, and mean, and miserable, and wasting my life away, and meaningless, and etc. Funny really, considering that the only reason why any of those were applicable at any time were because my family and communities put a great deal of effort into subjugating those effects. Well, despite the nasty effects that has happened it didn't seem to bother me so much because I was already used to being an outcast.

Well five years ago, that changed. I moved away, got married to a delightful agnostic and joined a bunch of great clubs full of free thinkers. I also discovered in my new residence, that people my age are usually very accepting of my religious point of view, or lack there-of with no issues despite their differing views. We coexist, there's no reason for me to be 'militant'. However! Lately, I have been dealing with my little brother who is still suffering from the effects of living in the little hole that is full of the very same people who brought you Michelle Bachman from Minnesota and hate science teachers who teach biology. Nice huh.

Perhaps I should start at the beginning.

I have four memories that are very vivid considering that I made them when I was so very young. I remember climbing up a mountain with my grandparents, my great aunt, my aunt and my mom. I actually recall details more clearly than my mother about the trip. I found a huge snail that I wanted to keep as a pet. We kept it in a Kleenex box. I complained that it would get out and the next morning it was gone. I also discovered that cacti aren't limited to just deserts, and that you shouldn't try and pick them up. Ouch! But understand that I was four. Another memory, I took my Bigwheel down the stairs because I thought it would be fun. Turns out, it wasn't.

Too far? Maybe this one will help. This next memory I have is very, very vague and I can't help but wonder if that was maybe because it was an even earlier memory. This one again takes place with my grandparents and my great aunt, and they were discussing something with my mother in a very happy chit chat sort of way. I was very distressed, and my mom was doing the classic, pull the whiny kid off and set them off to the side while ignoring them. Whereas I went under the table and crawled right back up again. I remember orange. Eighties motif type orange. I also remember the details on why I was upset. Over the loudspeaker or was it a radio? A deep, male voice was telling a story about how some guy was getting nails driven into his hands and that we should be happy for him.

Anyone else think that the crucifixion story might be just a tad too traumatic for children? Anyone? Anyone? Yeah.

My last memory that I'm going to share, happened when I was older, somewhere between five and six. My mother and I were lying on the bed and she turned to me and asked, “Brandie, do you believe in Jesus?” I remember looking at her and thinking very specifically, “Who!??” So deflecting my lack of knowledge I instead asked, “Do you?” She replied “Yeah, I guess.” Then I told her I did too, and she seemed very content with my answer.

It seems like a strange memory to keep, but I retained it because it's very important in my Christian upbringing. You see, when you look to your child for guidance, that makes a huge impact for the ever-so-wanting-to-please-mommy mindset. From that moment on I became the child that would sing so loud at church that old ladies would rush up to my mom after the service to congratulate her on her wonderful parental skills. It also put her warmly into the center of attention at church, even though she never volunteered -- even if it was mandatory.

But I couldn't just be the best singer, I had to follow everything the church and the bible told me to. I listened intently to the bible lessons at bible study. Although I remember specifically frowning down at the story of the Tower of Babel. So that meant that God doesn't want people to work together? People working together makes the world a better place, though! Wouldn't that mean that God is either stupid or doesn't want humanity to improve? That story stuck out so sorely even at my young age.

Despite that, I did other things to make me the perfect little Christian daughter. I would pray every time I said a naughty word or had a naughty thought. My dad actually thought it was a big joke. I was always confused when I would start praying and he would laugh at me! At times I think he even told me words were swear words even when they weren't just to spark a response. In honesty, I have to thank him A LOT for me pulling away from the Christian mindset. After all, as a young child I asked lots of questions like most children do. He typically gave me very stupid answers that I knew were just silly. This provoked me to not take everything that I heard lightly and to think out things for myself.

Another thing I enjoyed doing with my dad was to watch 60 Minutes on CBS every Sunday. Hehe, for a while I thought serial killers were people who put poison in cereal boxes. I'll get to more of that later. The show, not the cereal boxes.

Fast forward a few years to the point where I was slowly growing into my adult brain.

Things were beginning to be perceived differently. Despite how much everyone professed their strong belief and commitment, it seemed obvious that nobody really took it seriously -- at least nowhere as serious as I was taking it. Then there was the blatant hypocritical crowd. Those who do the meanest things, or drink and gamble their nights away while ignoring their families' needs (my mom). Those who were having sex with other people behind their spouses back (mom again). Then Sunday would come along and there they were, sitting right in the front row.

Speaking of sex, I have another thing I must thank my dad about. See, he raised me up to be a tom girl. When you don't subjugate yourself to the usual gender stereotypes, glaring contradictions stick out like sore thumbs. For example, young men were encouraged to have sex, lots! Whereas young women were instantly labeled as sluts if they so much as even humored the idea of sex or came across as too pretty. I also didn't like the fact that nudie pictures of women were all around, and yet women were the filthy, vile ones while the men were just being men. Silly men! Oh and absolutely grating was how my favorite cartoons had these powerful, macho male characters as the heroes. While the leading female characters were just there so that the awesome characters had someone to rescue every episode. All of this of course easily wrapped around the rolls pushed forward by the church. Women were hapless and weak who could never amount to anything in life except for total devotion to their husbands!

Speaking of husbands, enter my mother's second marriage: the wife beater. Hate is not normally something I toss around lightly when it comes to other human beings. But I hate wife beaters! Now this was the point where things started to get really interesting. See the church was continuously teaching how to be submissive and devotional to god and Jesus. It was drilled into every ones head to LOVE and FEAR god. Well, newly acquired personal experience via the wife beater, I learned that that- is- impossible! You do not love something you fear, you hate what you fear. To avoid what I feared, I spent the moment that I got home, til the time I had to go to school the next morning hiding in my bedroom. I had one thing to keep me company and that was the TV that my dad gave me. Going back to happier moments when I wasn't at my dad's, I looked for shows that were very similar to the journalistic style of 60 Minutes. What I found, was The Learning Channel (back when it was still good!) The Discovery Channel, and The History Channel. Then I'd get dragged back to church every Sunday and listen to the drivel of worthless talk, we're all sinners, and just down right stupid things the people believed in.

It didn't take long for my ultimate realization. Most people don't have a eureka moment. I did. It wasn't an “Eureka! There is no god” moment either. Instead it was, “Hey, I never actually believed any of this crap! Why do I go through the motions as if I do?” The reasoning was, I did it to make my mother proud. Now that I was old enough to recognize her narcissistic behavior, her constant bouts of drinking and leaving me behind to take care of my five year old brother I didn't have time to waste with stupid rubbish like that.

Now that doesn't mean I didn't suffer. Because I had long instilled myself with ingraining paranoia into my imagination. At this point I had a persona of an evil conscious and a good conscious. I was constantly being told that we all have an evil side who wants to do evil things, so we have to fight and take position with our good side, that I had actually manifested two voices inside my head. Very classic cartoony style shoulder mascots even. I knew it was stupid, but at this point I had learned that the human brain isn't something to trifle with. (Meanwhile research has determined that large parts of the brain go into total shutdown during the last transition of rewiring for the adult brain, FUN TIMES! My brain was so out of wack at the time that I can attest to that!) But the biggest thing I had to fight, was the paranoia sky daddy constantly watching me. So very George Orwellian. (If you haven't read the book "1984," I recommend it.) Even after I knew that the paranoia was entirely in my own mind, it was very difficult to shake. It took at least a year if not longer. General habits took even longer to fade away.

Now I normally don't think back on my history anymore. It's over with, done, all but forgotten and the biggest issues of my past have healed up nicely with the help of my beloved and patient husband. The reason why I'm writing this story now is because I have been re-engaged in my outrage over my history as I get phone calls from my little brother on a nightly basis. He's got the same issues that I dealt with growing up, but he likes to entice them *grumbles) and then he expects me to kiss his boo boos better when it gets thrown back into his face. That's frustrating by itself but what's more frustrating is to still see the damage that religion continues to invoke on people. Even though I'm out of it, I still end up getting needlessly sucked back in again. Especially when it comes to someone else trying to leave the fray of dysfunction.