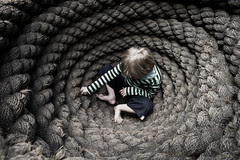 I have been an ex-christian for over 10 years. I was "recruited" into christianity in 1992 by sheer stupidity. I was young and much like most high-school graduates, didn't know what I wanted to do with my life. I had already had an interesting summer and through a friend, I had heard about this girl who happened to be one of his exes. Strangely enough, he even recommended that I date her! Anyway, skipping ahead to the meat of the story, I got to know this girl's mother first..... literally. It didn't take her long to profess her faith to me and through the telephone, she could sense that I wasn't a willing participant in that part of the conversation. Evidently, something sparked in this woman and she urged me to run right down to where her daughter was working and pick her up and so on.... This was the beginning of what I like to refer to as the "rope-a-dope."

For the two years that followed that fateful night, I was systematically asked to give up or change one thing after another about myself in order to become more of an ideal mate for this girl. These things were asked by both the girl and her mother. One of those things was the requirement of regular church attendance. But not just any church, THEIR church, a moderate presbyterian church held in a converted (no pun intended) apple barn. Kitchy if nothing else. The girl's parents were married in that church and it was made abundantly clear that the girl would be married in that church as well.

Sad enough to be able to say, I met a slew of good, albeit misguided people through that church. At first, the people seemed genuine and the "lessons" from the pastor seemed simple enough to understand. Each sermon was more or less a "be good to one another" reminder with a bunch of god-garnish. We had to sing a bunch of songs that basically sounded like the brown-nosiest things I've ever heard. When I looked around during the "hootenanny", there were people with their eyes closed and their hands lifted up to the ceiling as though someone was robbing them. I thought this behavior was strange and I tried my best to overlook it, but had anyone seen me at that time, it would have been hard to deny the look of sheer bewilderment on my face. Because I was learning, I figured this was bringing me closer to this girl, so it was just something I'd have to learn to deal with...

In 1995, I finally wed the girl. In the same apple barn kitchy church her parents married in. It was everything her mother could have asked for. (Notice I didn't say that I could have asked for.) I had been immersed in christian doctrine for the better part of 2 years and had since been baptized and on a number of child retreats to help the youth pastor. (Incidentally, I always thought it was interesting that I was asked to help with these kids as my foul mouth and chewing tobacco habit had not curbed significantly in accordance with the girl's mother.) According to this girl's mother, I need not worry myself with things such as individual thought, professional ambition or personal enrichment outside of christianity. As a new christian, I was to concentrate solely on becoming a good christian - i.e. a non-drinker, non-tobacco user and a non-"cusser". This included the severance of all my pre-christian walk relationships from my life, to include my childhood friend who had always aimed to keep me out of trouble. Why? Because he wasn't a "bride of Christ". How this happened, I don't remember and I'm not sure I'd want to, but I complied. I said goodbye to almost everyone I knew prior to my walk with the lord. Everybody, that is, but my very successful father who made about $400,000 a year and was in the twilight of his career. Strangely enough, that was the only "secular" relationship that I was encouraged to maintain. Of course, that's just pure coincidence, I'm sure...

As my "walk with the lord" got longer, so did my questions get deeper, whose answers required more than a simple dismissive blurb about god. I wanted to know why if he was our creator did he create an entire species of people in his own image for the sole purpose of worshiping him? Pastor after pastor fell at the asking of questions just like that one. No one had an answer and they knew I was beyond simple appeasement - I wanted a concrete answer. As this was happening, my professional ambition as well as my marriage was falling apart. One by one, the "good" people I met throughout my tenure at this apple church started pulling the rugs of prayer right out from under me. It wasn't long before I got tired of hearing how "god must have another plan for you" and "god shuts one door and opens another". At that point, if god would have just opened a window, I would have happily hurled myself out of it. These same sentiments turned from fair-weathered to outright betrayal when the girl I sought so many years before up and decided that she didn't want to be married any more. The credit cards (all in my name) were maxed and there was no more fun to be had. With some encouragement (and funding) from her mother, the girl I sought found one shark of an attorney who left me financially responsible for the entire marriage. Evidently it was not clear in court why exactly I needed $3000 in Mary Kay make up, but I looked like a good guy to make responsible for that. Feeling dejected from the dismissal from my own apartment, I called on some of my good christian friends to help me sort through my emotions and guess what - every single one of them had "pledged allegiance" to this girl and refused to speak to me.

I know that I have not cited any biblical contradictions as to why I might have chosen to become an ex-christian, but I feel that in order to understand an organization, one need look no further than it's members. Christianity as an organization is nothing more than a guild of hypocrites. A body of people comprised mainly of junkies, alcoholics and others with severe personality disorders who have banded together because they all share the common delusion that their imaginary friend loves them and favors them over the rest of the free-thinking world. There are those of us who don't need the fear of an angry being punishing us for all eternity to do the right things by ourselves and amongst one another. We don't need a "God" to be good people. We don't need a book of exaggerations and misinterpretations to tell us how to live a life worth honoring and to decipher right from wrong - at least not a book as self contradictory as the bible.

I am a proud ex-christian who is glad to have made it to the other side. My children are all non-christian and my spouse is non-christian. As far as I am aware, we all intend to stay that way. Christianity is the opiate for the masses of the weak and defective.