Why I Am Not A Christian 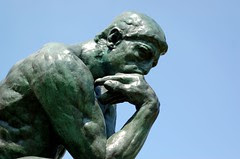 This is going to be long and rambling, but not intentionally. The topic is clearly stated in the title, but in this introductory paragraph, permit me to amplify slightly. In this article, I intend to chart the route of my own non-theism. Call it descent or ascent, but know that I have felt like a mountaineer, struggling towards one peak, only to have another suddenly rise before me, beckoning me to climb again. But the path has never been straight. It has always been circuitous. That’s why this literary map will belong and rambling.

I didn’t possess a natural inclination to believe in God. My father decided not to convince me to believe in Santa Claus, and I don’t rue his decision. I still enjoyed Santa, but I understood that he was a pleasant fiction, like Bugs Bunny. It occurred to me by the time that I was in the fourth grade that God might also be a fictitious creation.

Of course, this was accompanied by apprehension and fear. My parents seemed to believe in God, in Jesus, in something called the Holy Spirit, in the resurrection, and in the scary hereafter. My mother taught me a wonderfully morbid little song that terrified me:

I didn’t tell anyone of my incipient atheism. The subject frightened me too badly.

Three digressions: No, I am not likening God to Santa Claus. No, I am not an atheist. Yes, I know that those are double negatives, but they express what I want succinctly, so I forgive myself.

Anyway, I was soon launched headlong into Christianity. I embraced Jesus Christ as my savior, fervently. This was caused by the divorce of my parents, and my mother’s subsequent refuge in Jesus. I don’t say that mockingly, and it isn’t in retrospect. When my parents divorced, my father suggested that my mother start attending church. She followed his advice. I was swept along, as were my siblings. I loved Jesus passionately from the ages of about 10 – 12.

Then a lot of things happened, which I will try to expand in the succeeding paragraphs, after another digression.

A lot of Christians, upon hearing of my lapsed devotion, automatically aver that I was not a Christian in the first place. I’m not interested in discussing that opinion. I was a “born again” Christian who had accepted Jesus as the Messiah and received the Holy Spirit. That’s not all that I’ll say about this, but it is all that I will say for now.

The church we attended was of the Pentecostal variety. I loved it, and participated enthusiastically. I spoke in tongues, and unabashedly bore my testimony to anyone who would listen. We went to church at least three times a week. I read the bible daily, prayed multiple times a day, and immersed myself entirely in Christian culture. I was a precocious and voracious reader, so I gobbled up Nicky Cruz, David Wilkerson, Hannah Hurnard, Salem Kirban

, Hal Lindsey, Haralan Popov, Ernest Angley’s now almost-forgotten “Raptured” novel, and practically everything that Zondervan published. If the Left Behind books would have been published then, I would have read them. I listened to Jimmy Swaggart, Andrae Crouch & the Disciples, and everything else that I could find that was Christian music.

Then I read “The Modern Tongues Movement

” by Robert Gromacki, which had been lent to me by a Baptist minister. He also lent me a Scofield Reference Bible, and I purchased a Cruden’s Concordance. I began to doubt the honesty of my own religious experience because of the Gromacki book. I looked around at members of my own congregation, and saw people who had willfully accepted a lie. They weren’t speaking in tongues, they were spouting gibberish. I had been spouting gibberish. They had brainwashed themselves in order to feel good. We had brainwashed ourselves.

Then I thought: If we can do this in our sophisticated 20th century, how do I know that Christ’s followers weren’t similarly deluded? Everything came crashing down.

I fought it for years. I kept praying, kept reading my bible. I started to search for evidence of something -- of anything -- miraculous in the world. I attended the faith healing meetings of Vic Coburn, and watched thousands of people in an auditorium believe what they wanted, while nothing miraculous happened on the stage. I spent months investigating a photograph that purported to show Jesus in the clouds that had an entirely untraceable provenance. It is probably still being distributed among the gullible.

I also read “Healing: A Doctor in Search of a Miracle

,” by William Nolen, and left as disheartened as the surgeon who wrote it. I read “The Bermuda Triangle Mystery Solved

” by Lawrence Kusche, and “Crash Go the Chariots,” by Clifford Wilson, and further cherished mysteries disappeared. People like to believe the implausible, I realized.

Whatever I investigated of the supernatural or the paranormal vanished like smoke when I looked too closely. I learned that purposeful stupidity was rampant. I listened to adults say things like, “Only a vain person would believe that we are alone in the immensity of the universe,” and watched other adults nod as if they had just heard wisdom instead of banality. I listened to adults say, “We only use 10% of our brain,” as if it were incontestable fact.

I read other books, many of which I regard as slightly sophomoric now, but they were seeds for thought then. I read “The Philosophy of Humanism

” by Corliss Lamont, “On Human Nature

” by Edward Wilson, “The Conquest of Happiness” by Bertrand Russell, “Beyond Freedom & Dignity

” by B.F. Skinner, and “Asimov s Guide to the Bible

.” I read Kant and Hume and Voltaire. Slowly, I moved from devout believer to militant atheist.

The atheism didn’t last. First, because, in the 9th grade, I acquired a Jewish girlfriend., and I realized I knew little of Judaism. I’ll write more about her soon. Second, because I started to read the existentialists, and encountered Søren Kierkegaard’s leap to faith. I realized that atheists and theists were not only claiming too much, but that what they were claiming was irrelevant. Christian belief is only and always an exercise of faith, not something to be decided by logic.

Let’s return to my Jewish girlfriend. Due to her, I decided I would become a lifestyle Jew. She gave me a Talmud for my birthday, a drastically abridged and annotated pocket version. Today, it would be something that one perused on an IPod. I became acquainted with the Talmudic scholar Rabbi Moshe ben Maimon and his “The Guide of the Perplexed

,” likewise in abridged form. I read Herman Wouk’s “This is My God,” Howard’s Fast’s “The Jews: Story of a People

,” and Chaim Potok’s “My Name Is Asher Lev

I was preparing myself to become a Jew.

My mother accidentally intervened, sabotaging my planned conversion. I’d invited my girlfriend – her name was Andrea -- over for dinner. During the course of the meal, my mother casually informed Andrea that she would burn in hell forever because her people had murdered Jesus. This isn’t like my mother. I was stunned, and so was Andrea. The relationship ended, and so did my flirtation with Judaism.

Years later, I attempted to become a lifestyle Mormon. I didn’t believe it, of course – the stuff about golden plates and lost tribes wouldn’t even make a good adventure novel – but I liked most of the Mormons I’d met, and I didn’t feel that it could do any harm. An LDS Bishop unintentionally dissuaded me this time, by refusing to anoint me into what they call the Melchizedek Priesthood, unless I first shaved. I decided that Jesus would have been unlikely to concern himself with the minutiae of shaving, so I bowed out.

There are other events that led to my unbeliever status, but I won’t go into them in any detail here. I met Roman Catholics priests who didn’t believe in God, but they liked being able to do good works from within a powerful institution. I started to read John Shelby Spong and other liberal Christian theologians. In other words, I became comfortable with my lack of faith.

At one point I joined the Unitarian Universalist Association, and I still admire them, but I began to discover how much I dislike labels. I’ve spent many fruitless hours explaining what Unitarian Universalists are and the distinctions between atheists and agnostics, and I don’t want to do it anymore.

The Mormons believe in the aforementioned golden plates. Roman Catholics believe in transubstantiation. Christians as a group believe in an invisible, omniscient, omnipresent superbeing who created everything. Scientologists believe in Xenu. I've known Hindus who prostrated themselves before statues of the elephant god Ganesha. Muslims – at least some of them – believe that deliberate martyrdom is a virtue.

There are good Christians. I know many of them. There are good Muslims and Hindus and good Marxists. However, they all have one thing in common, in that they have divorced themselves from zealotry, and concentrated instead on what Christians call the Golden Rule, and what many humanists call the ethic of reciprocity.

Many religions have their own versions.

“Hurt not others in ways that you yourself would find hurtful." Udana-Varga 5:18

“This is the sum of duty: do not do to others what would cause pain if done to you.” Mahabharata 5:1517

“In happiness and suffering, in joy and grief, we should regard all creatures as we regard our own self.” Lord Mahavira, 24th Tirthankara

So, in summary, I am not a Christian -- because I figured out that I don’t need to be in order to be a good person, that I can be a good person without the accompanying supernatural baggage, and without the risk of being infected by mind-rotting zeal.

Incidentally, I offer posthumous thanks to Bertrand Russell from whom I borrowed my title.