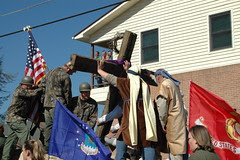 I grew up in a Christian home, loving, never to question authority, always bring it to God and you will be blessed. If I wasn’t, well... God was testing me. Growing up it never crossed my mind that there was something else to believe in. I was the good girl who had the truth on her lips. God is good, how can he not be? Not until college did I expand my mind and fully open it. It’s a brief overpass of my history, but a lot of you know exactly how my “upbringing” went. It wasn’t until I met my future husband that everything finally made sense.

Back up to my high school years... I went to church, gave my life to Jesus Christ, gave 10%, hung out with Christians, but also wasn’t afraid to have secular friends either. Although I still felt that I was right and they were wrong for drinking beer. Towards my college years, I became more liberal. I got a few tattoos, had boyfriends but was still a virgin because I promised God I would painfully do it. I had in my mind like a lot of young Christians who “are saving themselves” that sex was something magical and every time you would have it (with your spouse) it was going to be AMAZING, therefore it was worth the wait. Ohhh deary, how naive I was. Don’t get me wrong, sex is wonderful, especially with someone you love. But let’s be realistic about it. You have to work at it, treat it with respect and as a normal part of a relationship with another person and with yourself.

Going away to college I felt that I was closer to God than ever. I was reading the scripture, praying, doing what I had to do to get into Heaven. I was single, independent and loving it! I didn’t see the problem with drinking socially, I rarely got stupid drunk, and I wanted to show the non-believers that not all Christians are squares. And with a fling romance I lost my virginity. I was still a Christian, but took pleasure in worldly things. I detested those Christians who were holier than thou. I was a loving person who would share that love without boundaries. I was so sure in my walk with God that there was not a single doubt of another way to live. Never say never.

I felt obligation towards God to bring non-believers to the light and truth, but I wasn’t going to force them, as so many have done in the past. But my questioning was just another doubt, so I locked it away, far away.

This whole time I was justifying my beliefs. I would use the Bible to say, that they would drink wine—or, the men back then had no weddings or paperwork, it was plain and simple—he saw, he took for his wife, and then he got her pregnant. Then he took another wife and possibly a maidservant. I felt that my way of living had much more meaning than that. I still believed in God whole-heartedly, I wanted to please Him, and I couldn’t wait to get to Heaven. And all those questions that non-believers or soul searchers had about God or the Bible--I couldn’t answer. We are taught to be okay with not knowing. God is full of mystery and He is doing things we couldn’t fathom. I wasn’t threatened by their questions, because I knew what I believed. Little did I know, they tell you that to keep you dumb. Not make up your mind on your own.

After college I met a man. He was kind, self-confident, helped others in need, smart, etc. I knew that he wasn’t a Christian and I was fine with that, he seemed more to me a Christian than a lot of people at my church. I always had the mind set that he would turn to Christ. He was willing to talk about God and religion if I wanted to. He never imposed his beliefs on me, and he never complained when I would wake up early and go to church. I always tried to get him to come with me, but he just smiled and made a lighting bolt sound as if he would be struck as soon as he entered the doors.

It wasn’t until then when I started to realize that you don’t have to believe in God to be a good person. Wow, it dawned on me that what if this whole time, I was believing in something fictional. Whoa, that’s a lot to handle since NEVER before I had thought of anything but what I was taught as a child and teenager. So yes, I had been brainwashed. Living with a veil over my eyes this whole time. Well needless to say, I did my research (a lot) and was completely amazed at how things didn’t make sense. I had started to form my own answers with my own opinions for the first time in my life and not somebody else’s. Seeing both sides of the story is key to forming your own beliefs. Not only seeing, but without judgment as well. I mean, it was obvious—the Bible was bias and contradicting. Where are the stories from the Egyptians? Or anybody else for that matter? I wanted to make up my mind in seeing everyone’s opinion. Not just take my Mother’s and Pastor’s word that they were sinning. Hence, God wiped them out. Never hearing their side of the story?? What??

I tried to take it in strides, but this was INCREDIBLE! Then I look over at my now husband and asked him, “Why didn’t you shake me and tell me I was wasting my time.” He answers me in the most simple of forms: I have never been judgmental of other people beliefs nor do I ever want to influence or question anyone’s beliefs.
“That was why I never believed in god and didn’t agree with religion,” he said.

So I’ve been living in the clear for almost a year now. I’ve never been so happy to be okay with my choices and not have to justify them. At first, I was all about arguing my points and trying to let my still Christian friends and family see another side to the story. It’s no use; their god will always win. Either he is testing you or blessing you. By no means should you question him either. So I stopped arguing, because if they’re proven wrong (which they are; many of you have helped me with polishing my history knowledge), then you don’t have to prove yourself. Prove it, give me proof that there’s a heaven. You simply cannot. Besides, if we’re trying to say we’re right, we’re doing the very thing that religion does and why we hate it so. Our actions speak louder than words.

It’s simple; god said after Noah and his family came out of the ark, that “Never again will I curse the ground because of man, even though every inclination of his heart is evil from childhood.” If every man is evil, then how can you believe in something that man wrote? For so much of the Bible--I was always justifying and saying that I don’t really believe that part of it. That’s being selective and lying to yourself. Either believe whole-heartedly in it or against it.

A while back I read about someone being a Christian but not always agreeing with what they do or what the church does. My question to them is, do you believe everything that god did? Killing Aaron’s two sons while they were making a sacrifice unto him. But they lit the fire before he said to, so he killed them. We all have plenty more where that came from.

Whenever I think of religion, I think of the military. What does the military do? It breaks you down mentally as well as physically, it brainwashes you to believe and do as you’re told without question, and who do you answer to and listen to? Your commanding officer (your pastor); and even higher than that, your government (god), It’s a scary thought. Nobody should own you and you should feel no obligation to something you were born into.