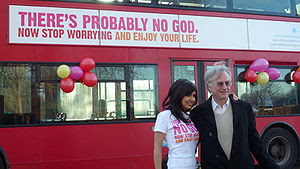 A few old friends ask me why I'm an atheist. Anyone who knew me growing up remembers me as a faithful and religious teenager. What could have possibly happened to the kid who led prayer group every morning before school, organized Chrysalis weekends and professed to love Jesus Christ with all his heart, mind and soul? It was a slow processes, but I'd like to share it and what atheism means to me.

Let me set the stage: I have read the Bible cover to cover multiple times and studied some of the most popular modern Christian thinkers like Dobson, Campolo, Colson and many others. I was the 'go to' guy for Biblical information in high school and college. My faith limited or false: at the age of 15, I kneeled and prayed the Sinner's Prayer and asked Jesus Christ to forgive my sins and rule over my life. I spent the better part of a decade working on that relationship, praying daily, trying to be more Christ-like and coming closer to Christ. So atheism for me is not an uninformed choice driven by a lack of faith. I was not a half-hearted believer; I was all in.

Back when I was a professing Christian, I attended a Bible study with my parents and a few other friends. It was dedicated to some of the harder subjects in the bible. I remember one night's topic being about evolution and the 'universal monkey mind'. The premise of evolution is this; a scientist on an island washes a potato in the ocean, a monkey observes this behavior and copies it, then through the 'universal monkey mind' all monkeys are now able to wash their potatoes in the ocean before eating them. And that in a nutshell, was evolution, a crackpot idea to make man the center of creation instead of God. It was useless as a science and highly contested by everyone in the field.

However, I reasoned that there were people who believed this the same way I believed in Jesus. They must have reasons and if I could understand those reasons from their perspective, then I would have a way of countering their arguments and hopefully witnessing to them. One must understand an enemy before doing battle with them. Besides, I knew that my beliefs were correct, so they would stand up against any test.

I picked up a book on the subject; Richard Dawkins The Blind Watchmaker. This book was highly recommended as an easy introduction to the theory of evolution. My mission was to be able to think like an evolutionist while retaining my Christian mindset so I could convert the poor, deluded souls who'd been hoodwinked by this so-called theory.

For the rest of the story to make sense, I need to summarize what I learned: Let's say you have creature X1. It doesn't matter what X1 actually is; it can be a dog, a plant or an aardvarkosaurus. There are lots of variations among X1 individuals - some are tall, some a short, some are lighter, some are darker. The dark colored X1s fare better because they have superior camouflage. They don't do much better, just about 1% or so better. Over 1,000 generations, the vast majority of the population is dark and now we'll call them X2 (though some are still X1). X1 and X2 are essentially the same animal. X2 is not necessarily a new 'species'. But if we keep running time forward, we'll slowly get X3s with a longer snout, X4s with longer legs, and X5s with stinkier scent glands. Viewed as a continuum, each step is a pretty small change from the previous. Saying anyone of the them is a distinct species would be difficult. However, there are now enough differences between X1s and X5s that if two of them were to get together, they could no longer breed; their genes would be incompatible. We can't really say that a species is a particular animal with certain characteristics; a species is more of this continuum from early ancestor to later descendant with many changes in between. This is what Darwin predicted and it that conclusion that the entire field of genetics supports.

Wow. No one had ever explained it to me with such clarity. I can see how the 'universal monkey mind' became a caricature by those who would dismiss evolution out of hand. But now I was left with the fact that no one I had ever talked to among my Christian friends had any understanding of this definition of evolution. I'm kind of an armchair scientist, so I kept studying. I found out that all modern medicine is based on evolutionary principals. It does have everyday applications. It it testable, falsifiable and there has never been any evidence to the contrary and only evidence to support it in 150 years.

So why did people of faith hate evolution so much? As a Christian it was my duty to find out the truths of the world. Jesus is the way, the truth and the light. I've got to be more like Jesus.

Basically what I found was that the truly faithful people I looked up to simply would not accept evolution, despite evidence or admittedly not understanding its most basic precepts. People were willfully ignorant of evolution or they would learn only the things that put evolution in a poor light; fossils are from the devil to test our faith, Darwin recanted on his deathbed, Hitler used Darwin to create the Holocaust, Polonium rings or the salt content of the ocean disprove evolution. It didn't matter that these things were based on logical fallacies or blatently false; people wanted to believe evolution was evil, so no amount of convincing can make it otherwise. I began to understand how ideology worked.

So I'm kind of stuck at this point. I have a truth that contradicts my faith; Evolution is the way the world works but faith sayt to reject this truth to keep loving God. It really does come down to a choice of truth or faith. Faith means putting the blinders on; I have to ignore the fear, the lies the devil and the world are telling me and accept that God really does have an explanation that I'll fully understand once I get to heaven. Many people go the path of faith and choose to believe and overcome doubt. To the rationalist or the atheist this is all self-delusion. I reasoned that believing in heaven without proof is just as stupid as rejecting evolution because one's faith says so. There has to be proof.

Faith is believing despite the evidence before you. I began to realize that thinking this way is not helpful and certainly not moral. Let me say that evolution was not the only crisis of doubt; I could not plausibly continue to believe in many things once that thread became unraveled; how could a loving God give people 70 or 80 years to tell them they love him or be punished with eternity in hell? If there is one God, why does religion spark so much conflict? Why is there still evil in the world? Why do miracles only happen in ancient tales and not today? Why is there no historical proof that Jesus existed? Why does the Bible have so many contradictions? Why does it have rules for how to treat slaves but nowhere say slavery is bad?

The answer, for me, is that the Bible is a collection of stories of desert-nomads with no understanding of science and a morality built around fanatical worship of a deity that demands blood-sacrifice. Over the years, the stories have been changed and manipulated to suite the agenda of the day. This is true of all faiths. They demand you believe, live according to their rules and don't question them.

I couldn't pretend anymore. I knew it was all fake. No one had real answers for me. People wanted to believe what they wanted to believe. In church I found that reality was shut out because it conflicted with faith.

I found myself at this crossroads. My faith had been winding down for a while as I investigated the way the world worked. I'd studied quantum mechanics, biology, sociology and many other subjects. Everything pointed to a universe where God did not exist. I had tons of doubts and questions. I could either believe by faith, or follow the evidence.

This is important; I chose. I have turned my back on superstitious beliefs. I decided that I need proof to live my life, otherwise faith is another word for 'lying to myself'. There is no reason to believe something without tangible proof. To believe in something just because someone says so is to stop thinking. To believe just because you've had a positive emotional experience like salvation is probably a better reason, but personal experiences are not tangible proof. I've applied this rationalism and I think there are many things people believe in without questioning.

Atheism is not a belief. It is the absence of belief. I do not believe in God. For me, he does not exist because he cannot be proven. I will not live my life in service to a figment of the imagination. I will live a good and moral life because it's the right thing to do, not because of a fear of eternal hell-fire. I will live based on evidence; when the evidence changes and something new is discovered or proven to be wrong, I will change what I accept to be true and live accordingly.