A very short trip that took many years 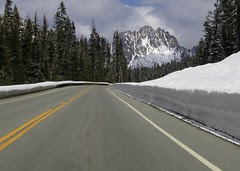 It was not a long trip from agnostic to atheist, but it took years. My story is a bit different than many of your testimonials, but I wanted to post this in solidarity and respect for the bravery that so many of you have shown. I can’t imagine what personal strength it must have taken to leave a faith that was given to you from childhood, and especially to feel yourself drift from a spouse whose traditional faith remains. I have read this story several times over on these pages, and it is an impressive display of humanity. And in many cases heartbreaking, when a marriage or family is pulled apart.

I’ve considered myself agnostic for many years. I’m in my mid-thirties, and I’ve not been a part of any church since I was a child. Even then, we were not a religious family. We attended Lutheran, and then later Methodist churches, but only as a social custom. My parents, who no longer attend church, consider themselves Christians only in a cultural sense. Nowhere in my childhood did I suffer a literal teaching of scripture. My wife, also raised as a Lutheran, is firmly agnostic and happily so.

So why did it take so long for me to self-describe as an atheist? It’s not that much of a change, especially from the point of view of the faithful. But even for me, with a fairly non-religious upbringing, it was not an easy transition. This is why I am so impressed with you brave and independent minds who have pulled yourself from very religious backgrounds into a clear-headed and free state. If calling myself an atheist was a difficult move for me, it must have been earth-shattering for some of you to depart from life-long Christianity.

I can tell you that I spent a great many years not thinking about religion much at all. It was not for me, so why even consider it? I don’t like seafood either, but I certainly don’t spend much time thinking about it. I suppose this is where a lot of people are. The recent Pew poll on American religious views shows atheists at 1.6%, and a larger class of the “unaffiliated” at 16.1%. I used to be one of those 16%. There are many more atheists among them, but for whatever reason they do not (yet) consider themselves atheists.

What finally brought me to the 1.6%? I was tired of not having an opinion. Or admitting it, at least. I don’t think you can decide what to believe as a course of action. So, it was not my understanding that changed, but rather my honesty about it. When my daughters get old enough to ask me what I believe about the supernatural, I want to have a positive answer. Not the rhetorical equivalent of a shoulder shrug. If they choose to believe differently, I will love and admire them all the same. I may even drive them to church if they decide to go! (But good luck getting me inside unless it’s their wedding.)

That’s all I wanted to say. I have enjoyed your stories so much. You are a brave lot.