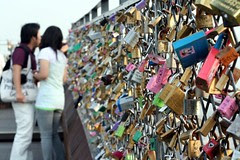 Chains of love at Seoul's Namsan Tower
-- Image via Flicker

After reading a lot of de-conversion accounts on this site, I've come to feel like I got off lucky - very little real trauma or abuse at the hands of the Christian community, no rejection from loved ones, & the scars I do have are healing nicely. However, I've reached a point in my recovery and life where I feel the need to tell my story and connect with the ex-Christian community to continue finding my way forward, so...

Christianity had a pretty mild role in my upbringing. My mother belonged to that most bland of mainline denominations, the Presbyterians, whos motto seems to be "Just try to stay awake through the sermon. That's all we ask." Dad was a lapsed Catholic who was content to leave it all in my mother's hands. Mom herself is one of what I expect are the silent majority of Christians. She has a balanced perspective on things, is respectful of others' opinions & beliefs, isn't dogmatic, and is content to leave things in God's hands rather than wade into the melee swingin' her Bible. If there were more Christians like her, the world would be a saner place.

My middle & high school youth group also was excellent & probably the only thing that kept me from destruction of self or others during my adolescence. My experience there left me with only good memories & some lasting friendships.

My journey to the "dark side" (cue Darth Vader music) began just after high school when, for no particular reason, I came one day to the realization that here was this whole big mass of stuff I'd grown up believing - John 3:16, the Christmas Story, the Gospels, etc. - but had never given the serious commitment I always knew OUGHT to accompany genuine belief. So...sitting up in bed one night after lying awake pondering this, I just went ahead & got born again. Then laid back down & went to sleep. Easy as pie.

My problem is that I'm a compulsive people pleaser. I HATE to disappoint. I'd always rather get my feelings hurt than hurt someone else's. Generally a good thing, I think, but when the person you've set out to please is one who's standards, by definition, you will NEVER be able to satisfy, it's a psychological disaster just waiting to collapse on you.

The next few years followed a course I'm sure you all know (too) well. The slowly ratcheting up of pressure to perform: MORE self-sacrifice, MORE tracts to pass out, MORE prayers to be said, verses to be read, tongues to be spoken in some grunting guttural "prayer language" while squatting on your bedroom floor wondering if twenty minutes is long enough or should you go the full half-hour & wondering what you're saying to Jesus anyway, hope it's something really beautiful that expresses your joy and gratitude to him & maybe they'll give you a transcript of it when you get to heaven...Drop out of community college to work full-time at a Christian bookstore, street witnessing in Georgetown on Friday nights in the company of former Hell's Angels who make salvation seem SOOO much cooler than you can with your pimples and peach fuzzy mustache. Passing out tracts to co-ed hotties while other boys your age are learning how to actually PICK THEM UP. Let us in charity pass over other scenes in my joyful relationship with our Savior, related to the conflict between Paul's admonishments to self-control and the raging hormones of a typical twenty-year-old boy. Suffice it to say that it really SUCKS that you can't pull the blinds closed over God's watchful eyes when you really need to. Some moments in life don't appreciate an audience.

This much I did to myself, but I was lucky enough to find some people to help me abuse myself even harder, Oh, excuse me, I mean grow in my faith.

There's a group called the Navigators. Ever heard of them? They're somehow connected with Campus Crusade for Christ, I believe. Their little gimmick is "discipleship". By this they mean that a more "spiritually mature" brother will take a less mature brother under his wing & guide him along the path of spiritual growth. They base this model on Jesus' practice of "discipling" the apostles, & sort of spiritually hand-raising them, so to speak. The point they seemed to have missed is that Jesus (assuming, of course, that the Bible is true) was perfect & therefore perfectly suited to teach these guys. My mentor was a professional engineer who had all the social skills of one of the bad characters in a Dilbert comic strip. His mentor was our pastor who had built his own little "band of brothers" from a group of sheep-in-men's-clothing who'd followed him from town to town for several years as he took new pastoring positions.

You know, this is starting to run on, you've heard it all before in other testimonials, & I'm starting to get too worked up & whiny reflecting on what a load of festering crap it all was, so let's cut to the money shot...

What ended it for me? Basically it was taking at face value all I'd been taught about how it's a "personal relationship" with Christ, & the implication inherent in that idea that a relationship is a two-way street, & then seeing how there's really nobody holding up the other end of that relationship. For instance, I'd been taught all the stuff about the mustard seed of faith, claiming your healing, & all that Kenneth Hagin shit that leads you to believe that God actually WILL divinely heal you from illness. I got the flu one day working at the Christian bookstore & happily spent the day praising Jesus & claiming my healing in his name until they basically FORCED me to go home with 103 degrees. Of course I rationalized it all after the fact that I should have stood my ground & refused to go home & that was the moment I failed Jesus.

Or the time a couple of years later when I was dealing with a quite painful personal situation & begging God for, basically, just a pat on the head, chuck on the arm, ANYTHING to help me through & know that I wasn't alone. I mean, if you're dating someone, for example, & you're whole relationship amounts to you calling them up to talk on the phone except THEY never say anything & there's really no perceptible difference between your talking to them & talking to a dead receiver, where's the fucking RELATIONSHIP?? It was never a matter of faith to me. I believed my ass off. It was a matter of sometimes you need more than words in a book, you need a hug, or a touch, or some kind of sign. You need interaction. You need connection. You need the other person to participate in the relationship.

All the people who still have their faith, I can't help wonder that they've never had that kind of moment despite the fact that they've probably all gone through the same amount of suffering I was going through at that time in my life. How in the world do they still hang on to their beliefs???

The letting go process was slow. It started with this sense of hurt & neglect, & increasing bitterness that in the face of my growing doubts this omnipotent all-loving creator who sent His own son to die for me couldn't throw me the tiniest bone. Then one day the nausea came, borne on My Very First Suspicion Ever that maybe it wasn't real. The people who've never lost their faith, or the ones, like my wife, who never had any to begin with, can't begin to grasp what it's like to have that rug pulled out from under you.

A lot of the years since then have been a process of not knowing how to come to terms with the sense of anger and rejection from a person who doesn't really exist. How do you get closure? It's like being angry at a character in a book. The closest I can come to finding a target for my feelings is to blame the people who contributed to my head trip - my pastor & mentor & some others. But as I've gained distance I've come to the reality that they're just people too, & they meant well. Perhaps unintentional abuse is easier to forgive that something intentional. I sometimes want Jesus to really exist so I can kick him in the balls before I jump into hell, but that's just fantasizing.

As I close in on middle age ( middle age always being about 10 years older than I am at a given moment) I've finally, through therapy, through reflection, and through experience, started to come to a sense of peace and release about all this. The other day I was freshly struck with the absolute ABSURDITY of believing in the story of Noah's Ark. Yet I believed it wholeheartedly for years. Seeing what a fantasy it all is, how laughable it is, that all these people believe Noah's Ark, & Jonah, & Samson, somehow is healing. I guess finding the humor in something makes it seem smaller than yourself & if you can find enough humor in the idea of God & the Bible they become small enough for you to step over & walk on down the road.