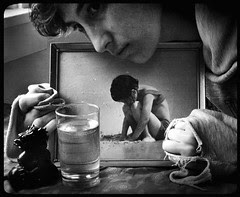 Let me start off by saying that I am new to this site. I randomly found it on Google by typing "ex Christians", and viola! It was like a gift from God. lol.

Anyways I am 18, male and for a year now, I have been an atheist.

So here is my story. Hope I don't bore you.

I grew up in a Christian Baptist home. My parents had instilled many strong Christian values that today I still abide by. We attended church service every Sunday, and it was rare that we did not go. In fact today I still go, but not as often. When I was a child, me and my siblings grew up in a strict home. Our parents were over protective and would not allow us to invite people over, nor could we go to someone else's house. PERIOD. We were not allowed to play video games, watch T.V., use the computer, or even play board games during the weekdays. Weekends, however, were the exception. But there was a catch; it had to involve the whole family. I guess from an outside perspective that this was rather excessive. But in our family, we made it the norm.

Besides the rather strict lifestyle I grew up in, we had some fun too. Growing up, me and my siblings had to compete in "Biblelympics" in our church Sunday school. My siblings and I were always helping each other memorize verses from the Bible and such. And every Friday, my mom would test us before we go to Biblelympics. If we memorized 5 verses every week, than we got one cookie.

But as you all know, nothing lasts forever -- especially fun. When I was 8, my father wanted to leave the family. I was shocked, confused, and I didn't know what to do. I was only 8 and torn apart. But luckily he stayed. But it was this moment that triggered reality. If I had to pinpoint in my life where things had changed the most, it would probably be that. Ever since then, I had to be more responsible, look after my family, be a good Christian, etc., etc., etc. I took it upon myself to change and convert nonbelievers. I even managed to convince one of my classmates who was a nonpracticing Christian to attend our church. But it wasn't before long that I realized that I was different -- different than the rest of the kids. I realized that I was attracted to people of my gender. I was gay. But I didn't know what being gay was, nor did I know it was a sin. I remember back when I was in grade 6, one of my teachers claimed that she was once a lesbian, but grew out of that phase. She even had a baby to prove that she was not a lesbian anymore. But of course being naive and young, I believed her. So I waited and waited until this phase went away. But it didn't, and thank god.

Church didn't help either. During one of the month's "missions", they "helped" parents try and raise awareness of this disease-ridden lifestyle that is being gay. They have propaganda clips showing how the gays would come and normalize their lifestyle. And how they are using Hollywood as a platform. They even taught parents on how to raise their children to be straight. What's worse is that my former pastor was even advocating "straight camps" to children who were suspected of being gay.
After enduring a month of the church's propaganda, I realized that I had to do something about my condition. I remember when I was 14 or so, that I even thought about going to those "straight camps" in secrecy. I even had a set age of when I am supposed to turn hetero. I think it was like 24 or something.

Let's fast forward to high school. During high school, I felt more distant from god. But I remember one teacher who changed my life indirectly. I was in 10th grade. My teacher was giving a lecture on math. We were talking about derivatives, exponents, and all that, when suddenly our topic was now on Tom Cruise. And from there it went from Scientology to religion in general. I remember one girl asking our teacher what religion he was in. And he said that he didn't have one. This caused me to wonder. Why? I mean, I knew there were nonbelievers. But the nonbelievers I had always imagined or had always thought where people of different religion. Not once in my sheltered life had the word "atheist" come up. I didn't know what it meant, nor the meaning. When the girl asked if our teacher why, he replied that there was evidence. Again this sparked my attention. I wondered, and pondered a lot. I remember thinking that either (A) this man was nuts or (B) this man had not been touched by the grace of god. But I ought to thank him. For it was him that had led me to discover atheism.

At first I was a bit scared of this atheism. But I guess curiosity got the best of me. You know what they say, "Curiosity killed the cat." But in this case, the cat was my former life.

From then on, I did some research, did some soul searching, etc., etc. And came to reason that the Christian god that I grew up with was nonexistent. And from then on it was smooth sailing.

I was going to talk more, but I would probably bore you. And besides I only wrote this cause I am procrastinating. LOL. Oh yeah, my parents don't know any of this. I try and keep my personal life off their affairs.