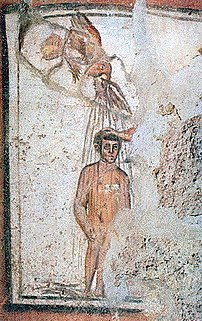 Sent in by Paul D

I want to make clear from the outset that my path from "born-again" Christian to atheist has been very long and very painful. I have been dragged kicking and screaming all the way, and the easiest thing for me to do would be to walk back into that religion. So, any Christian who wants to give me the "chosen to backslide" treatment... forget it. Also, when I say "Christian," I am talking about the type of person who calls themselves "born again". I do have a few dear Christian friends who are not the "born again or go to hell" kind.

There are dozens of reasons for my de-conversion, so for the moment I will just go over a few key events.

My first experience of born-again Christians was when I was a rather mixed up 17-year-old, and I was latched onto by a small group of people whom showed me the kind of love and attention that I had always wanted, but never had. For this reason I started going to a rather grubby little Baptist church in the UK. This church had a young pastor named John Brewster. He could give a sermon so full of emotion and conviction that people were made to laugh, cry, and be deeply emotionally affected. I quickly submitted to his leadership.

Over the next six years he came to be one of the most wicked and vindictive individuals I have ever come across - not the kind of person that goes around molesting children, but rather an very skilled bully and manipulator. Any one who dared to question him or could see him for the person he really was had to be gotten rid off quickly. Not content to get rid of them, he had to get inside their head and destroy them and oh boy does he know how to ...k around with peoples heads. One dear friend of mine whom Brewster tried to drive to suicide because of his homosexuality said it was like looking into the face of evil. This man demanded total obedience to himself and his words and all friendships outside his church should be considered wicked and ended.

More than anything, I am angry at myself for allowing this man to steal my best years. As a brand new Christian I was adopted by a couple: Sarah who was 17 like me and her much older partner Laurence. They took me in and told me to think of them as my own family, which for me is very hard to do. After a few sort months of this wonderful new experience I was met outside church by Laurence who thrust a Good News Bible into my hand and waffled something about God calling them to do something else now, and he wished me good luck in my Christian life. With that, they refused to have anything to do with me ever again.

As time went on I threw myself into the Christian life and believed I could hear the small still voice of the Holy Spirit and feel God with me. Strangely enough, the Christians I knew spoke a lot more about the Devil than they did about Jesus. This disturbed me. They said that the will of God for a person would be what they hated and feared most, and any good thing that happened in life was more than likely a temptation from the Devil. In fact, anything that didn't have a fish sticker on it was "of the devil," and helping the starving and other people in need was to be avoided because they were only going to hell in the end.

Over the years I noticed that Christians were all talk about loving people, but when it came to actually doing it, they didn't.

My thoughts became darker and more depressed as time went on. Thus was the pattern wherever I went: Christians would pretend to be a person's best friend when trying to get their scalp, and after they got it then they couldn't be bothered any more. This disturbed me, but I would push the thought away -- such was the fear of hell that had been drummed into me.

In the middle of this the Toronto movement hit and people were doing all kinds of crazy things under the Spirit, but I couldn't tell the difference between that and people who were supposedly demon possessed. What that movement did best of all was to split churches and cause division. One person whom I spoke to who actually went to Toronto said that when he visited the surrounding churches and asked how the revival had effected them, all replied with blank faces "what revival?"

Shortly after this I moved to Lincoln and joined a mega-church there, but continued to get more and more depressed. When I expressed this someone thrust a book into my hand named "Curses, Causes, and Cure," by Derek Prince. That was like giving a bottle of scotch and a hand full of pills to a suicide case. This book was so depressing and only added to my feelings of guilt. I was told by some of the spiritual elite that I was possessed by demons, and that I needed to be baptised, as the demons come off in the water. Three months after I was baptised I made a suicide attempt, and for the first time I was away from my Christian environment. This church I was at had a membership of at least 2000, with actual attendance of over 4000, so you would expect that I would be well supported, but in fact in my eighteen months of rehabilitation and treatment for manic depression, NOT ONE came to visit me. I found out that after long prayer and guidance this church had decided it was the "Will of God" to sever all contact, "So I could find my own destiny". It was only at this point that I started to question things - but thats another story.

Thank you all for your kind attention.