Sent in by Kyle

First, I want to thank whoever is responsible for this site.

I'll explain my title in a bit. But my de-conversion is very typical. I was raised in a Christian home. We attended a Methodist church, but the attitudes were more akin to the Southern Baptists. I have great parents, and I never endured any abuse in the typical sense.

However, church was a big part of life. Sunday morning, Sunday evening, Wednesdays, special events, holidays all revolved around the church schedule. I was indoctrinated with the typical system of prayer and good works coupled with regular church attendance will get you to heaven. I really wasn't even taught much about grace. I was presented with hell and eternal damnation. So I got saved when I was about 7 years old.

The years passed and ended up going on a mission trip with some Baptist family members. That was the first time I was exposed to the true Southern Baptist belief system. I learned about grace, etc. When I returned, I was on fire. I joined the nearest comtemporary church and was back in the routine of church life.

After spending the next seven years in and out of different churches, I left my wife and daughter, and we eventually divorced. It was the most painful choice I ever made. I suffered. I missed my daughter, but I couldn't live with her mother. The pain and torment were excruciating. It was made worse by my mother who would rather see me miserable for the rest of my life than to go through the divorce.

That is when I started searching. Let me say at this point that I had been in true counseling for two years. I was trying to break free of the low self-esteem and people pleasing that had been instilled in me my whole life. I wanted to be comfortable in my own skin without worrying about what everyone else thought and/or said about me.

This search led me to atheism in 2007. I read the God Delusion and my eyes began to open. I kept questioning my old belief system and feeling the confusion of breaking with something I had known my whole life. I went through all the different emotions that I have read about in the other testimonials. But thankfully, my eyes were open. As I have adjusted to this life, I'm happier. The weight of guilt is not there. I have more time to devote to my family and things I enjoy rather than being in church every time the doors are open. I realize that morality and ethics have nothing to do with an imaginary god in the clouds. I have learned that good works should be done because they are the right things to do. I used to do good things out of guilt of fear. Life is much better now 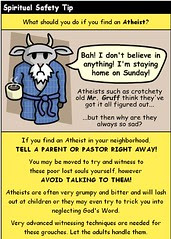 My new wife and my brother are the only ones who know. That brings me to my title. I am a phony, and I will remain one. I am currently an elected official. I serve a small community, but I have aspirations of serving in a very prominent national position. The power of the religious right is so strong in my local area that I fear that I cannot climb the political ladder as an open atheist.

Now I know some of you will say that I am doing this out of fear. Trust me, I would love to debate the Christians I hear everyday, but I can't. I have a higher purpose. I want our government to continue separation of church and state. We need atheists in office to temper the zealots that think they will run our country. We need reason, not faith, in office. We need advances in science that will not be squashed by the fear of progress as proposed by the religious right. We need our country and world to thrive in an age of reason rather than an era of mythology.

So I am a phony. But I'm a phony with a plan. When my political journey comes to an end, I have already settled on a title for my memoirs, "An atheist among us"

I have thoroughly enjoyed this site so far. I look forward to your comments.