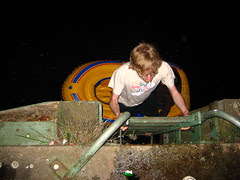 It has been a month since I posted my last testimonial (see "I Feel I've Been 'Churched' Enough") and I would like to share my update with you.

It's been ten months now since I stopped attending church and I tell you it's a GREAT feeling knowing that I am no longer "slaved" to some gawd or the buy-bull. Also, I no longer tithe at the church I used to attend and now I'm saving money like crazy!! Not only that, I can spend money on things I really like. I gave and gave to the church and all I had in the end was being a broke-ass church mouse and an empty wallet. Boy, am I glad that's over.

I work in retail and from time to time, I run into some people I went to church with. Sometimes they ask me why I am not in church anymore or come and tell me that there's a singles meeting at church on the second Saturday and my response will be, "I'll keep that in mind". In reality, I refuse to be "slaved" back into Christianity. I'm already happy with the way things are going now, why would I go back?

In addition, I have one customer who comes into the store frequently and she is like super-religious and that turns me off completely. She asks me how am I doing and I say I'm doing good; then she goes, "God made it that way." I wanted to tell her to leave "gawd" out of this conversation...there is no "GOD". In this business I am working at, I can't really say that because that would get me fired.

I have co-workers who are non-Christians and I get along with them just great. Before my de-conversion, I asked them do they go to church and they say "no", which I can totally understand. This one particular person told me that he was forced to go to church at a young age and he did not like it. I thought about that for a long time and I ended up missing out on so many things like going out to parties and socializing with people. I can't believe I wasted so many years on serving skydaddy and got nothing in return. That was the final straw for me!

When I was a Christian, I had to act a certain way, talk a certain way, walk a certain way. Not anymore!! Where in the buy-bull does it say that you have to be this particular person or stick with Christian people only in order to be "a good person"? As I mentioned in my last testimonial, I went to college and made new friends who were non-believers and in addition made gay and lesbian friends as well. At least they don't judge you or put you down so they're my friends for life.

My mother, who is almost 69 years old, is still a major religious freak. In the past, she and I would get into fights about trying to get me back in church even after I graduated from college (it will be 2 years in May). She still thinks that going to church is the "right thing" for me, but now that I'm older, I can do whatever the hell I want. I'm glad that she doesn't bring up the church issue to me anymore, but what really bugs the hell out of me is that she gets on the phone and talks to her friends/relatives every night about how God did this for her or how God can move mountains and all this other bullshit. It gets really irritating and I want to shout to her, "THERE IS NO GOD!!!!" Also, when I have meals with my family, my mom is the only one who says grace; I don't do that anymore. Every time she says it, I just kind of roll my eyes and don't say anything. Hell, I'm a great person who never broke the law or got into trouble, so why do I need to go to church for THAT?

BTW Mom, no one convinced me that I don't have to be in church anymore; I have my own mind and I have to decide what's right for me, not what's right for you!! I'm in CONTROL of my life, not you or some imaginary gawd! And as Brandine put it so eloquently: If God or Mom doesn't understand it, too fucking bad!!