It Felt So Good To Be Right 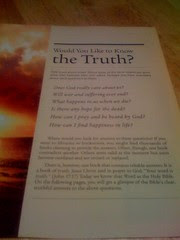 Ok, ok, ok...I will finally share my testimony (geez, just like in church). But this is only a small picture for now and not in chronological order, kinda random, just off the top of my head sort of thing.

I graduated from New Tribes Bible Institue. Yep, step right up and memorize the WHOLE book of Ephesians. No PDA either! That is, no Physical Display of Affection (but my girlfriend and I got as close to each other as possible!). Hey! I remember looking at Sports Illustrated magazines that the school received and seeing pictures cut out of it! Wow... nothing like censorship. So sad to look back now -- those years wasted. My mind could have been learning science, history and math. *Sigh*

I attended Capernwray Missionary Fellowhip. One day, outside, during a break in classes, I remember pointing to a flower and said to a friend, "Something so beautiful as that, how could anyone not beleive in a Creator?" She said, "Beauty is in the eye of the beholder." I know she didn't mean to (maybe?) but that was just another little "doubt straw" added to that ol' camel's back. I hadn't thought about it that way, you know, that beauty could be subjective. Thank you my friend.

I remember standing at a Farmers Market and seeing all these smiling and nice people and thinking, "So, most of them are going to hell? Really?" That just doesn't make honest sense. I know, I know -- "God's ways are higher, He hates sin, Hell was made for the devil and his demons,..." Still, does that make sense? All those nice people? And most seemed nicer than me (not that my standard is high, but you know what I mean).

I remember going "door-to-door witnessing." Man, did I hate doing that. I felt like such a dork. Come on, that has to be the uncoolest thing to do for anyone. I was always hoping not to meet anyone I knew (I think I never did, lucky me!). And what do you do with the bible you lug along? You want to hide it so know one will see you with it as you walk the sidewalks, but that sure wouldn't be too spiritual now would it! And such a sigh of relief when it was over. But a nice little brownie point for me to show to other christians (you know, you just sorta quietly mention it to them as you "fellowhip). Now that was a good feeling. One leg up on them!

Saying the blessing over food. Ok, this can feel kinda good when done as a family, one of those group/cultural feelings that the socialogists know about. But hey -- when alone? Come on -- mumble a few words so you can eat lunch without feeling guilty -- that's all it was. And hey -- when out in public and all alone -- forget the whole thing. Not going to look like some kinda religious crazy nutjob! Oops, unless there is some christian there who you know and he/she is watching you from several tables away. Always feeling like you are being watched, man I hated that feeling.

Thoughts in my mind while growing up:
Man, oh man! Have that tossing around in your mind as you are growing up, wondering, and not knowing. But eventually getting preached and taught at, enough to convince me that God can be trusted and man cannot. I am so jealous of those that saw the fallacy and went the other way.

Hearing and seeing the trouble with certain verses, you know, the last part of Mark, those couple of verses in I John, the woman caught in adultry story in John, etc. Obviously all added later. Yet my strict christian friends who only trusted the KJV (King Jimmy version), well, their thinking is, "Those verses are in there so we can trust them and that is that." No more thinking! But come on -- I never liked the KJV -- just too hard to follow. I was raised up using the American language. Hello? -- can't we use a version that talks our language and trust it? And the unwritten response was, "Well, uhm, yes we can, for those spiritually immature, but once one has grown up in Christ then you will see the need to use the proper version (i.e KJV)." I never did like that (un)reasoning (stuck with my NIV or NASB). But I flowed along and stayed with the group.

Wait, wait, I don't get it -- if we are going to live in heaven for billions of years and live here on earth for only 80 or so...then why are you (my good spiritual christian friends, not those worldly ones) buying the SUV's, life insurance policies, latest cell phones, coolest digital cameras with the most pixels, investments in good financial products, latest clothing fashions, etc. It never made sense to me. And no arguement does. Come on -- if you really, truly believe, you'd better be storing up your rewards for eternity not here on earth. This place is going to burn! But no one really believes this, except for a few whack jobs out there -- and you notice no one (and I mean no one!) wants to have them over for dinner?

I believed:
Crap, I just believed all that stuff in the bible. What a dork I was.

What I didn't believe in:

Oh my, but some how, through many means, I came out of it all. And if I did, I know others (that I think can't) can. No one is lost (for the most part) to religion all can use their minds again. Think back -- did you expect to become an atheist/unbeliever? Remember how horrible those words were for you? It was unthinkable. Avoided at all costs. But it did happen to me, to you. And it can happen to others.