I thought I was OK 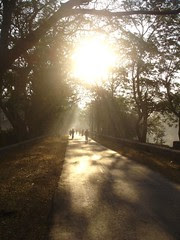 Before I became a Christian, some 25 years ago, I really don't know what I was. Maybe an atheist, like my father who had become disillusioned by the Catholic Church, but I think I liked to think I was someone who was "one with nature." My "god" or whatever it was, was in the great outdoors. It gave me peace, hiking in the woods, smelling the scents of the forest, seeing the colors of the sunset, the fall leaves, the wind blowing the snow in the winter, it was enough for me. I also figured that if I was a better parent than my parents, gave my kids the parenting I didn't get, I would be alright. Even thought I struggled with depression, not knowing it was a medical condition at the time, trying to find out what to do with my life, since my parents didn't give me any direction, I thought I was okay. Not perfect, but I never thought about that.

Then enters the born-againers. My ex's brother invited us out to some Christian coffee house, and after the hour and a half drive my ex and I promptly fell asleep at this coffee house -- not the reaction everyone there was hoping for from the fresh new recruits. Later that night, when talking to one of the spiritual elites, he started out his conversation with, "Well at least, Bob, my ex's brother knows where he's going when he dies." There started the strange introduction to born-againism. It's funny how certain images stay implanted in your memory. I can see the table where I was sitting, where he was sitting, that I was in a kitchen, his cocky, arrogant demeanor, but I remember nothing much after that first statement. I'm sure he talked about how I was a sinner, and how I was going to hell. All those conversations have to include those statements. I can remember my reaction. His comment hit me in a way I cannot explain even now. I never considered death, I was 19, I didn't consider myself sinful, my ex was involved in all kinds of stuff, drugs, etc, that would make him "more" of a sinner than I was. I was a "good" person. Surprise, I really wasn't.

I've read testimonials from people who said that their mental condition was a reason for their becoming "saved". I would have to say that I was ripe for feeling like a total loser. I was struggling with depression for years, and at that time, had no idea what was wrong with me. I thought maybe I was "crazy". I had no other explanation for my feelings. Of course, depression brings on low self-esteem, self hatred, and feeling not as good as others. So when this spiritual person told me I wasn't good enough, it felt right with me. We left there without me "accepting Jesus," and I never saw those people again.

I married my boyfriend and had a miserable marriage. But, I thought that at least I was a good mother. I didn't have any problems with Halloween, Christmas, etc.; it was all just good fun for my daughter. I brought her up to be independent, I was proud of myself for that.

Then I met the born-againers again, and the doubts started all over again. I was going to hell; I was a retched sinner; my kids were going to hell; I needed to believe and accept this invisible, scary god. At that time the church on the Army base in Germany where my ex was stationed showed an "end times" movie. I don't remember the title, but there were scenes where giant scorpions were biting the "left-behinders," and the mother and child that were looking at a wordless book before being beheaded. That was a movie for recruitment, including recruiting children! I was terrified! I had never heard of anything like that before! "The hellfire sermons weren't enough, lets show the scorpion movie!" Does anyone remember this movie? Well, right after that movie that put god in such a good light, I went right up to the pastor and asked him if you could accept Jesus out of fear? No, it had to be out of love! Love? How can you love something that your terrified of?! That was it; he just walked away leaving me with the images of scorpions and killing. Now I really didn't know what to do, because I was obviously one of those "bad" people who was going to be left behind to deal with all this horrible stuff, as well as my kids! I didn't know I was such a sinner. Months later I did become a born-againer, but it wasn't out of any love of god, or my desire to know Jesus better. It was out of shear terror. I never felt any love for god in my 25 years of being a Christian. I was never taught that.

Then started my journey of guilt, feeling like I was never a good enough parent, Christian, person. Works don't get you to heaven but I hoped into the good graces of the people in the church and god. And of course tithing couldn't help either. Everyone around me had it together but me. And my doubts and questions made me feel more like a phony. God never healed me of my major depressions. Why? No answer. I tried to hold it together in the church for years, until my mental peace said I couldn't believe it anymore. All the church did for me was lead me to guilt, more depression, even lower self esteem, self doubts, never, ever being good enough, no matter how much I tithed or worked myself to death in the church.

Religion, or god for that matter, never gave me the peace that surpasses understanding. I was miserable. I've been out of the church for about six years now. It's a long process. I'm trying to get rid of the never-ending guilt that I was programmed to have. I was okay before. I had peace in nature. I loved to ride my bike and enjoyed hiking. Now I have this heavy load that I'm trying to get rid of. I don't have the joy that I used to. People I see from church tell me they feel sorry for me because of course I'm going to hell. They have to tell me how wrong I am. I feel that if they talk to me it's just to re evangelize me. I feel used, abused, and lied to. I still have the depression, but instead of agonizing over what a sin it is, that I need to "give it to the lord", and feeling guilty for being depressed, the first victory I had was to embrace my depression. Sounds strange, but I've just let it go. I struggle with depression. It's a brain chemical problem. Unless there is some miracle and a new anti-depressant is created, I'll always have some aspect of it in my life. So what? I don't have to dwell on it and fight it anymore. It's who I am. There is victory in just allowing myself to be who I am. Who "god" supposedly made me to be. It's okay to be me. Religion was supposed to make me feel happy and whole. It was supposed to accept me for who I was. It's sad I had to leave god and religion to find any kind of peace and acceptance in my life.