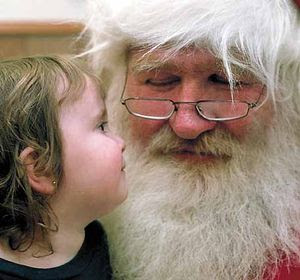 Image via Wikipedia
I was born into a born-again Christian family. I had the whole photographic family – mother, father and a younger brother. When I was a child, my mother talked to me on our couch about loving God and accepting Jesus Christ into my heart. After I did what she told me to do, she gave me my first Bible. It was pretty and it clasped shut -– with pictures sporadically placed throughout.

We went to church every Sunday morning and all my friends were other Christian kids. My mom was very strict – TV was heavily monitored as to what would be acceptable by Christ and what wouldn’t. I attended Christian schools from second grade until high school. Christian friends, Christian teachers, Christian parents. We didn’t associate with non-born again people. My parents taught me that Catholicism was of the devil; that every other faith but the one which we practiced was of the devil.

My family changed churches when I was in grade 7. We moved to a Baptist church that housed not only a church, but an elementary school, high school and college. This particular church was extremely tight-knit for such a large institution. Even though I was young, I still looked at things quizzically. To my young eyes I still realized that the women of the church were looked at as though inferior to men and incapable of doing things that the Bible taught us was just for men -- being called to the pulpit to become a pastor, for one. The other thing that caught my attention was the fact that women were not permitted to wear pants – these were the clothes of men, and women were told to wear skirts or culottes. If you didn’t follow guidelines such as this, you were looked down upon as though you were an inferior Christian -- not welcome to join the choir or participate in other church activities.

My family decided to enroll me in the church’s school. I felt like an outsider even in our small class of maybe a dozen students. My family wore pants at home – we lived on a farm – it just wasn’t practical to wear skirts when you’re up to your knees in horse poop. My family tried, though – we really did. We went to church Sunday morning, Sunday evening and even the less well known Wednesday evening. We had pot roast Sunday afternoons for lunch because it was special and things needed to be special on the Lord's Day.

I looked forward to Sundays. I got to go to Sunday school with other kids my age who believed the same things I did. And when I stopped going to Sunday school and was considered adult enough to attend church like the other youth my age I looked forward to that to. All the other girls had beautiful bibles, often bound in hand sewn cases with floral designs as well as a notebook to take notes on each and every sermon. Then after church, I met with the other church goers – all who were more than friendly and welcoming.

The church had its own fleet of buses – buses which are sent all over the nearby towns to recruit people to attend the church. They focused on bringing in people who couldn’t drive and kids whose parents didn’t believe so that they could attend Sunday school with all of the Lords good little flock.
I tried so hard to be a good Christian girl. I wore skirts, I studied the bible, I went to church – but I never felt like it was enough. If God loved us unconditionally, then why did we have to go to church? Shouldn’t he know that we loved him from our thoughts? Why did he need to be worshipped? Why was he a “jealous god” if there were no other gods to be jealous of? The questions in my mind were growing in rapid succession.

The little spark of rebel in me (which would have still garnered me a “goody two shoes” title outside of the church) decided I would stand up for myself over an issue with the size of my earrings. My teacher decided to make a rule based on earrings my mother had given me for my birthday. A rule that said from this moment onwards, earrings could not be larger than a quarter. Of course – this was only for the uniformed students. Not for her. She continued wearing her grandiose gaudy Clementine sized earrings. This argument put into motion my leaving the Christian school system.
I was in for a rude awakening as to the real world and how people treated each other. I was put into a public high school and found myself feeling very much alone. My parents stopped attending church and became somewhat more flexible with the things I could watch on television.

I begged and begged my parents to be able to take a world religions course in school. They were afraid that my learning about other religions would make me lose my connection with Christ. Well; they were right. I did my final paper on Wicca and took that opportunity to search the internet for the religion that fascinated me the most without my parents getting upset with me. World religions class was really an out for me. I had been losing my faith since I had been given that bible. I didn’t understand why I couldn’t wear pants, or why I wasn’t allowed to learn about other belief systems, why I had to believe in a god I was taught to fear, why everything outside of what they told me was supposed to be evil. Why would a loving God allow abominations against him on His planet? Why did everything seem like it was bad or wrong? Why was the god of the Old Testament different from the god of the New Testament?

In my mind, God became as Santa Claus (someone whom my parents never let me believe in). Disillusioned at all of the gaps and holes in the dogma of Christianity, I grabbed all the books in the house explaining “scientifically” how evolution was wrong and how God must have created everything; books on cults and religions outside my own. I wanted to learn these things that were supposed to be ‘the big bad’. I wanted to know why these religions were wrong and what made mine right. I found no such answers. I found people grasping at straws trying to rationalize what they themselves didn’t understand.

Upon deciding that the Bible was fallible –- a work written by men for men -- arguments began to fall apart. I would have questions that could only be answered by Bible verses. If the Bible was so important and was the word of God, why did it contradict itself?

One of the hardest things I’ve ever done in my life is deprogramming myself from Christianity. There was no longer any circus net to catch me in life –- I had to live on my own – take accountability for myself. In the end, though –- I’ve become the sort of person I can live with. My thoughts are strong and my morals are secure. I don’t need an invisible superstition to shout “Doom!” at my head anymore.

I haven’t gone to church in over ten years, but I still feel that loss in my life. I don’t know that I can replace it, or that I even want to. I’m on a new path in my life and I believe it’s the right one.