The words that precipitated my deconversion 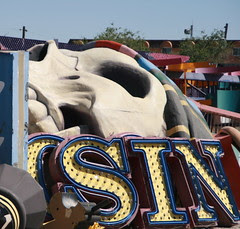 “You know he may die during the surgery… the Bible says that the wages of sin is death.” My mother, hundreds of miles away, stung me with these words over the phone about a year ago. By then I had stopped going to church, although I wasn’t planning on leaving the faith. I was a backslider of sorts, a Christian without a church. In her comment she was referring to my then-fiancé -now husband- who had been experiencing health issues from a genetic disease and was about to have a very complicated and dangerous surgery. Our sin, according to my mother, was that we had purchased a house a few months earlier and ever since had been living together without being married. Apparently, this was punishable by death. Anything bad that happened to us was now because of this.

At the time I thought that even though my mother did not agree with my living arrangements –as she had expressed very clearly in a previous uncomfortable conversation- she had learned to tolerate my choice, or so I thought. That day, when I told her about how we decided to postpone the wedding until the following year because of the logistics challenges from the surgeries, she interrupted me with these words: “You shouldn’t get married. What’s the point? You are already living together; don’t waste your money. But remember that you’re fornicating, and that sin has consequences. This isn’t what we taught you. You know it will be a dangerous procedure…he may die during the surgery… the bible says that the wages of sin is death.” These words stung because they appealed to my deepest fears: the loss of my future husband and the possibility that he ended up in hell. I thought she was right, but at the same time I couldn’t help but wonder about such an uncharitable comment: “what kind of religion justifies that you tell a scared young woman that her fiancé –who is about to go through a dangerous surgery - may die at the operating table? How is that supporting? How that is appropriate? How is that love?”

I was 30 years old, and had been going to church for most of my life. At the time I wasn’t attending any church because I wasn’t happy with its culture: it seemed that if you are not married, with children, and extroverted you don’t count. As an adult, I had not being able to find a niche at any church, and was aware that it was mostly my fault, due to my personality. If only I were more vivacious, more talkative, more fervent… I tried several things before giving up. I even took a test to see whether I had any spiritual gifts but it only confirmed that I had nothing to offer. Since my social support was outside church it wasn’t hard for me to stop going. Not fitting in at church didn’t de-convert me, but it took away the weekly reinforcement of dogma.

In the other hand, my mom got more fundamentalist over the last few years, after my father died. Her church community provided emotional support during her grief, a social life, and in time, leadership roles. Her sanctimonious attitude and jargon had been grating on me for some time, but as long as she was happy, I was happy.

My husband is a nominal Catholic, but never goes to church and is rather agnostic. I never tried to convert him because I was never good at witnessing, I loved him for himself, and frankly, I didn’t want to lose him for something that I myself didn’t believe that much anymore. My faith was shaky because there were so many unanswered questions. I think that at the time I was holding onto religion because of fear of the unknown and inertia, but I had been on my way to becoming agnostic for who knows how long, but did not dare to admit it yet.

My mother’s words caused something besides emotional turmoil and insomnia: they sparked my full de-conversion. Ultimately, I became an atheist after reading a lot and putting my doubts under honest and rigorous scrutiny. But it took that emotional spark to start it all.

The situation with my husband was not the first crisis I had experienced. When any of my loved ones died or suffered, I was able to justify it. Now, however, after listening to her words I couldn’t stomach all the platitudes and clichéd phrases that used to bring me comfort: “We’re praying for you” (If that makes you feel better, go nuts with that), “Have faith in God and you’ll see that he will recover, because God never fails” (so, it wasn’t your god the one who made the genetics booboo? Did the devil start to play genetics engineer with my poor husband? In any event, your god FAILED), “God has a plan for you” (I wouldn’t let your lousy god plan a birthday party for my cat), etc. I became cynical and rebellious towards God and the stupid phrases that some people said.

I even stopped praying because, what’s the point? Christians are not immune to suffering. They only justify it differently. In someone they perceive as a “sinner” (like my honest, affable, hard-working, loving husband), suffering is punishment, or a way for God to catch his attention. In a believer, suffering is part of God’s mysterious ways, or the devil trying to take away his faith.

My new skeptical attitude about religion opened my mind. I changed my opinion about certain social issues and alleged “sins”. Then I started to study history, got acquainted with mythology, philosophy, origins of the Bible, biology… until I realized that religion and God were a fabrication. This conclusion wasn’t easy to grasp at first, given my indoctrination since childhood, but the evidence was solid and I had to accept it if I wanted to remain honest.

I don’t hold a grudge against my mom. I love her very much, actually, and I know that she loves me too, in her way. Now that her life has improved (she was going through difficult times) our conversations are pleasant again. I don’t expect an apology from her, but I don’t dwell on her words. You know when an alcoholic says nonsense people say “It’s the alcohol talking”? Well, in her case, it was the Christianity talking. I know I shouldn’t justify her, but I’m too happy to care now that her words have lost their bite since I became an atheist. My husband is doing well and improving; we decided to not wait and got married at the court house a couple of months after the conversation with my mother. In spite of the difficulties, I am probably the happiest I have ever been!