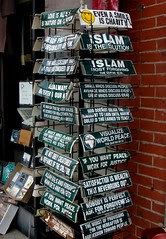 As a relative newcomer to the life of parenthood, I debate many issues internally and with my wife. One of those things is the Santa Claus lie, or rather, "Should we tell our children they get presents from a mythological man who, lives forever, knows about everybody's deeds, and visits their homes one night out of the year to deliver gifts?" There are negative effects to perpetuating such a lie, but it's embedded in our culture. If you live in the US, it's unlikely you don't know about Santa Claus. So, what are the positive effects of the Santa Claus myth? I can't think of any. At some point, your kids will discover there isn't a Santa Claus and you've been lying to them.

My parents never told me Santa brought me something, encouraged me to leave carrots for the flying reindeer, or took me to visit a fat man in a costume to tell him what I wanted for Christmas. This wasn't just because Santa didn't exist and reindeer don't fly. This was because Santa got in the way of another myth: a man was born of a virgin impregnated by God, healed people, said stuff about olive trees, and died on a cross to save me from eternity in Hell.

Perhaps it's easy to break free from the Santa Claus myth. No one above 10 years of age believes he exists. It was considerably harder to break free of the Jesus myth. According to this article, 76% of the US call themselves Christian. I'm assuming most of those polled are over the age of 10. This also assumes Christian means "I believe Jesus died on the cross for my sins". For me, the best way to start questioning the myth of Christ is to be immersed in another one.

For the first 20 years of my life, I was in church. We belonged to and my parents were very active in a non-denominational, evangelical church. We went to services at least 3 times a week, and I went to a Christian school. My mother was at first a teacher and then a principal for the school. After that, she became a bookkeeper for the church. My father was an usher at the church on a voluntary basis. I found myself early on to be bored with church, so the best way for me to occupy my time was to get involved with the television production of the church. That's right; we had an accounting department and a television production team -- at a church. I worked on the camera setup and light input monitoring aspects of the production. It was a lot of fun.

When I was 19, a missionary working in Indonesia asked our pastor if he knew anyone that would be interested in staying in Jakarta and helping with the television ministry they operated there. I was approached, and so I packed up and went on a two and a half month vacation in a strange land. It was a shock. I was awakened at something like three in the morning by a man singing over a loudspeaker. I inquired about the interruption, and I learned that Indonesia is a Muslim country and the sound was the call to prayer. The island of Java at the time was something like 95% Muslim. It was odd to see a culture that was equally or more immersed in Islam as the US was in Christianity.

Then, several questions hit me. I saw a religious bumper sticker. That was the moment that I still remember. They have religious bumper stickers. They're very similar to Christian bumper stickers. What if I had been born there? Would I believe the one true religion was Islam? Would my parents have taught me about Mohamed? A friend I had there told me the religions both started off at the same point and separated at Abraham. Which split was the right way to go? Next is the most difficult question of all: was either religion the one true religion?

I came back to the US, and I didn't leave the church right away. It wasn't long before I stopped going, but my parents insisted while I lived with them, I would go to church. So, I moved out. Thus began my journey to discover God for myself. At some point I realized the Bible was written by humans. They seemed to believe in some other forces from "the heavens", so maybe God was an alien. I read a couple of alien abduction stories, but I couldn't find an aluminum hat that would fit properly.

Maybe God is like Santa Claus. He's a myth to keep us "good" because he doesn't just leave coal in your stocking -- he sends you to a place of eternal torture. He's a way of controlling populations at the will of men who crave power. God was made by us, in our image.