My path to reality 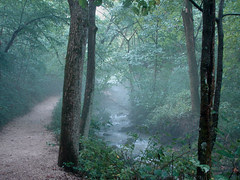 I was raised in a fundamental Baptist family. My parents divorced when I was 5 due to domestic violence. All the time I was growing up I went to church at least three times a week, was forced to participate in door to door evangelizing and running a bus route proselytizing children, to bring them to church on Sunday mornings. All my life I heard how great this god was how he gave his followers everything,yet I grew up in poverty.

While my mother spent all morning laying in bed reading the bible, the kids were left to fend for themselves. We were not allowed to go to school, and in fact I reached age 18 without ever going to any school.

I was a very precocious child though, and read extensively and taught myself as much as I could on my own. One night when I was seventeen we were driving home from a church function, my mom and step-dad got in a fight over something insignificant, and it escalated until my mother was crying as we pulled up to the house. Fighting was frequent as was beating the children but this night it went to far and my siblings and I ended up calling the police on my step-dad for hitting the younger children with a belt across the arms and back and head. I left that night. After staying with some relatives until I turned 18, I left for Seattle. (We had moved to Kansas City in a twelve-passenger van when I was 12 years old.) I started my life over again, getting my GED and a job as a security guard. Having many dreams and goals and wishing to go to college, but not having the money, I joined the Navy, which I am still in.

After I had moved out and started my own life, I struggled to make sense of everything, I tried different religions, and then one day I realized that I did not believe in the faith I was raised in, and I certainly did not believe in all the new ones I found. I realized that most of my problems in life could have been solved by people taking action to change their lives instead of praying to some nonexistent deity to save them from their troubles. In other words I became an atheist. Now years later I am married, have my first child on the way and am happy and free. Now that I look at life realistically, and with no mental religious delusional crutch, I am am achieving so my goals and have never been happier. Religion causes more problems than it solves. It is a mental disease that needs to be eradicated from our world.

Thank you for letting me tell my story. Live in the real world because reality is awesome.