26,000 kids died of starvation last night. Where was God? 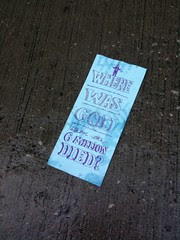 I have just recently made a break with Christianity. Looking back on it, it seems to be the end of 4 7-year cycles. In my early twenties, I thought more and more about little things about Christianity that annoyed me. My entire primary school education, save grades 7 and 8 (thankfully) were spent in some sort of religious school. In the South, religion is as omnipresent as Crisco. Let me say now that Muslims aren't the only one with their own fundamentalist schools. Christians have them too, and they are just as bad.

One thing that annoyed me was how in the Bible, there's a prohibition on eating pork which shows up in Islam and Judaism, but somehow Christians get around it. "That was the Old Testament" is what I was usually told. I took the "Islam method" to that and stopped eating pork in high school. Actually, it makes me sick today if I eat it. Heh, have a bout of pork poisoning on a flight down the entire east coast and you'll stop eating it too.

Anyways, that always bugged me, and then slowly, I thought about all the people that had been mean to me and committed acts of emotional abuse upon me. They were all Christian. 100% of them. But didn't God command us to love our brothers as ourselves? And didn't God say not to judge in the New Testament since the Old one is arbitrarily outdated? Christians get away with ignoring the commands set forth and nothing happens to them.

Other things that annoyed me were things like why God wouldn't answer my prayers. If I'm made by a loving God, why would he not answer my prayers? I've had the same prayers most of my life and one day I realized that they had not been answered. That really got the question marks going. And if the world needs more good, why are the good being snuffed out left and right while the bad keeps on prospering?

A very negative side effect of this, I feel, is a sort of social retardation. I went on to college and graduated twice before I got catapulted into this crappy economy (another issue -- why would God allow that to happen? Al-Qaeda isn't enough?), but my social skills were in poor order. After much soul searching and walking down roads paved with broken glass, I realized that it was because I had taken this religion way, way, waaaaaay too seriously. And more stupidly, I expected everyone else to take it as seriously as me.

If anyone ever bothers to read the Bible, you will see that not only do all sins count the same (horrible), but virtually everything is a sin. When I see a hot girl and think "Wow, what a hottie", I'm committing adultery and thus a sin. That adultery counts the SAME as a mass murder of 100,000. That's retarded.

I left Christianity as a religion about two years ago. I was fed up with the corruption and constant hypocrisy. How do poverty pimps like T.D. Jakes and Creflo Dollar (what a last name) sleep with themselves stealing all those poor people's money? And why are the poor the most religious? I strongly maintain that Christianity holds people, especially the poor and minorities, back. Instead of watching/going to church, why not watch some National Geographic or make it up to The Learning Annex or Kumon Learning Centers? That's where the rich are Sunday morning at 11AM.

The one single thing that pushed me over the edge in regards to God an Christianity was a bumper sticker I saw: "26,000 kids died of starvation last night. Where was God?"

And on top of all that, look at the track record of Christianity. It is totally mired in blood, and nothing bad happened to the perpetrators (Spain, I'm looking squarely at you).