The more I read the Bible, the more convinced I became that it was false 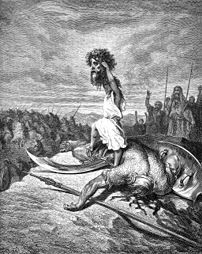 David & Goliath via WikipediaSent in by Corey

I was raised in a Catholic home from birth. I went to Holy Family Catholic school from kindergarten through eighth grade. I attended church every Sunday and kinda believed in it all. Now, my parents didn't really harp on God or the Bible. I don't think many Catholics actually read the Bible, but I went along with it all.

However, I must admit that I never felt that my "faith" was strong enough. I've been thinking about it lately and I think that I remember my initial doubting. My mother was reading me stories from a children's Bible. If my memory serves me right, it was about David and Goliath. There was also something she read to me involving angels. It all sounded very much like made-up stories to me. I asked why we didn't see any giants or angels, and she said that "We just don't anymore." That is what I believe was my first serious doubting.

Well, over the years of my life I tried to continue to believe in God, but I really never felt truly convinced, looking back on it. Throughout my life I basically lived how I wanted to. Then, eventually, I met the woman who I'm now married to. She was raised in a Baptist background. I began to go to her church, and I actually enjoyed attending it. It made me want to learn all that I could about God and being a Christian. So, I started reading the Bible. This book is what eventually caused me to become an atheist. The more I read the Bible, the more convinced I became that it was false.

Finally my growing doubt caused me to do some critical thinking and actual research. I read the book "Atheism Explained: From Folly to Philosophy (Ideas Explained)

." I watched videos about atheism, I went to different websites, etc... All of these things caused me to doubt more and more.

I still fought with it for a while but I came to the conclusion that the evidence against a god was far more convincing than the evidence for one. I am now an atheist, and freedom from religion is a wonderful feeling -- no guilt for simply being a human and having human wants and needs.

Being a theist almost drove me insane with guilt, anxiety and a fear of eternal punishment from a god who supposedly loves me.