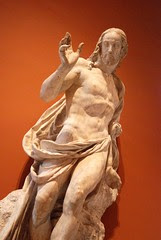 Oh Boy, where to start?

I was raised in a very hypocritical Christian family. My father had a particularly mean spirited approach to religion and Church, and I can remember hating Sunday mornings. My family attended church regularly up until 10 years and attended sporadically after that. I was "saved" at the age of 6. I remember witnessing to kids in school about Christ.

After my family quit attending church regularly I drifted from the practice of faith and really didn't think of God much until I became deathly ill while on vacation in Russia in my 20s. Alone and in agony, I called out to God for help and somehow I stumbled from a dirty and pathetic hospital out onto the streets, chanced upon a bus station which ran to the airport, and hopped a flight home to the US. Five weeks later I made a recovery with the help of a modern and clean US hospital.

At the end of this ordeal, I had lost 50lbs from an already thin, athletic frame. I credited my recovery to help from God and his guardian angels. This is where I recommitted my life to Christ, sought a Christian wife, got involved in a church, lead a Bible study, and even lead some poor fools to Christ.

This wasn't good enough for me though. I wanted more. I wanted to know God, to see his face, to love him completely with all my being. And this was the beginning of the end of my faith.

My first task was to read the Bible through fully from start to end. After the first reading I was amazed at God, but still a little confused about some things like the book of Job, where God entertains a little wager with the devil (How is that possible?), and where Isaiah says that the messiah would return in 40 years, Jesus appeared 490 years later, and the Jews are still looking for his appearance. So I read it again. During, this time I also read the Koran to try to understand why the Muslim world hates us so (the Koran is even more screwed than the Bible). This brought up more questions, but I still believed that the bible should be interpreted literally, and was amazed at God. I read the book "Practice of the Presence of God" and tried to follow its recommendations, which I might add was a total waste of time. So now on to my third reading, here is where I began to struggle. Not from the readings, but from the observance of pain and injustice in the world.

For instance, 25,000 children die from the effects of malnutrition in the world every day. A question popped up in my head, "How could a loving, merciful God let this happen?" To further bring this tragedy home, I theorized that many of these children come from Christian families. I pictured many thousands of mothers and fathers praying for a scrap of food or sip of milk for their dying child. God would not answer that day, today, or tomorrow. My mind reeled, "God would not refuse to hear and answer their prayers, there must be another answer: Ah, God can't hear. Why? Because he is not real." This sent my Christian brain into crisis mode. I turned to the Bible for answers, there were none. I turned to the assistant pastor of the Church; he could not help but insisted I must have faith.

Two years later I am a confirmed atheist, I believe not in Gods or Devils, Demons or Angels. I revel now in the immense richness and fullness of the natural world. I am repulsed at the "narrow-mindedness" of nearly all the religions of the world. I now see that for people of average or greater intelligence that reading the Bible is a road to loosing faith. If you truly try to understand the God of the Bible by reading and not by just listening to your preacher, you will find a God of contradictions, a jealous, unmerciful, cruel God, who demands your love and obedience and threatens eternal pain and misery if you don't.

Pssst. Never fear! He isn't real! I don't have to think that God is someone watching me all the time and I can catch fish, not because of God's blessing, but by a combination of skill and chance.

My troubles are not over however, as I still have a very Christian wife (who has not read the entire Bible) and an extended Christian-bigoted family. I see myself as a lone outpost for reason. Every time I question a statement of faith from my wife, it sends her into tears. I know she is thinking that I am going to hell, or that I will corrupt our children's minds. I have been encouraging her to read the Bible for herself, but it will be a hard struggle for her as it was for me. I am afraid of being shunned by my parents and have not told them yet. I still attend Church to show my wife that I love and support her, but don't know how much longer I can listen to this dribble.

The salvation message has to be the downright stupidest thing to listen to for the never before Christians, it is amazing that I was ever saved in the first place. I think it was only due to the thorough brain washing I received as a child.