The more I learned of other myths and the history of Christianity, the less I could convince myself that God existed 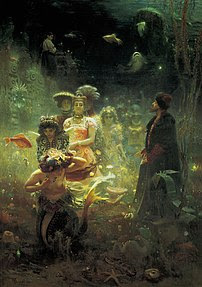 People do strange things when they "Find Jesus." Suddenly, your best friend won't talk to you anymore, or your punk loving drummer quits the band. They can't do anything on Sundays, and they won't hang out with you at the pool hall.

I didn't find Jesus; I was born with him. Losing faith is both terrifying and simple at the same time. First you follow the routine. I was baptized as an infant, into the Catholic Church, and from then until I was about ten I went to church nearly every Sunday morning.

As a child, you believe what your parents tell you, they say that the world is round, so it is round. They say that God is real, and that He loves you, and so He is and He does. They tell you that Santa exists, and will bring presents if you are good, and keep your room clean. You keep your room clean, and are a good girl, and on Christmas you find presents under the tree signed From Santa. If you had any question about the existence of God, the presence of Santa reassures you.

You dress up in your favorite dress, wear your pretty shoes, you take your mom's hand, and you sit in the pews. You are told to sit still, and you go to Sunday School in the middle of Mass, because you and the other ten-year-olds can't sit still, and the priests know it.

Many people do this for the rest of their lives. They wake up early on Sunday mornings, put on their nice clothes, and go to church. My regular attendance stopped around the age of 10 or 12. I was due to go through conformation that year, the Catholic way of re-affirming that you believe in God, and He wasn't just forced upon you, because you really didn't have any say in the matter at your baptism.

My mom got a job that required her to work on weekends a lot, and Dad already had a sporadic work schedule. Even without these changes, I may not have gone through conformation. Everything that I needed the word "believe" to define had been proved fictional. Magic, the tooth fairy, the Easter Bunny, Santa Claus. Could I truly kid myself into believing that God wouldn't be next?

Paralleling the disappearance of all things magical in my belief system was a deep-set interest in folklore and fairy tales that eventually led me to mythology. Somewhere between reading A Treasury of Classical Mythology cover to cover and discovering an entire section in the library devoted to the myths of other cultures, I came to the realization that these stories had once been held as hard facts. There were people as devoted to the worship of Zeus and Aphrodite as any modern evangelical Christian is devoted to his god.

Humans had been sacrificed in the name of some South American Gods; animals had been sacrificed to most European Gods. Fasts, and prayers, and wars had happened in the name of ancient divinities that most people today are not even aware of. Had there been any repercussions? What made the Christian, Hebrew, Islamic, or Hindi gods any more powerful, likely, or real than the ancient forgotten divine?

Still, these Gods had been forgotten; passed over as the impossible beliefs of ignorant pagan man. If the god of Christians is the one true God, does that mean that millions of people have been damned because they had no concept of monotheism?

In a thousand more years, there will be another religion, and the current ideals of gods will be put under the category of "mythology." The religion of the Norse also fell in the path of Christianity. Their nature oriented belief and heaven of drinking and fighting died not by Ragnaok, the Norse version of Armageddon, but by conversion.

The Celts, the Greek, the Romans and the Inca each had belief systems that lasted hundreds or thousands of years, yet are shrugged off today by people as â€˜myth.â€™ While judging these as fiction people read their own holy books filled with stories of creation and morals pulled straight from the myths that they disbelieve. If these religions didn't last, and nothing happened when they disappeared, what makes us believe that modern religions are any different?

I don't believe that modern religion is any different. It is here, and it comforts some people and scares others into conformity. In a thousand more years, there will be another religion, and the current ideals of gods will be put under the category of "mythology."

How does this belief influence my life? I am just about the same as anyone else my age. I am a little bit more careful about who I discuss religion with, because for some reason most people are more comfortable around other people with a similar faith.

Between the ages of 12 and 15 I suffered through the stages of grief that I find inevitably follow the loss of any great force in one's life. I denied the feeling that something wasn't right, and that God could not exist; but the more I learned of other myths and even the history of Christianity, the less I could convince myself that God existed. In the process of losing faith I did more research on a variety of different beliefs than most other people my age. Growing up with something to believe in makes losing that safety net hard to do.

Then I went to anger, as one will. Hating the con that I had been sucked into, the fact that I had wasted so many useless hours at Church, and reading the most boring, violent, bigoted work of fiction ever to be written. Following on the heels of anger was depression, a state that was not helped by the fact that my sister would burst into tears when I mentioned that I no longer believed in God.

Finally I made it to acceptance, and my belief that this is it, when I die, game over, there is nothing more, makes me want to get the most out of life. I spend my time with people that I love, because there is no point in wasting time with superficial people, learning things that are interesting, doing things that are fun, reading books that draw me in, and sleeping in on Sundays.