If it's a relationship, it sure is one-sided 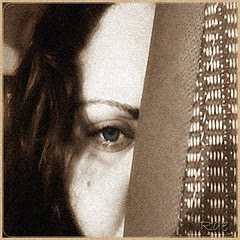 I grew up as a Catholic in a Hispanic family, my mom was seriously into the church while my father just followed her along. As I grew up, I had questions about the bible, god, I didn't understand the trinity, why Jesus had to die and this sin that was committed years and years ago by two people…why was it my fault? There were never any answers or usually my mom would say, “You can’t read the bible because you don’t understand and you’re not close to god like a priest is, ask him and let him guide you.” (what?!) I did my first communion, my first confirmation, all of the catholic crap (sorry I believe that's what it is) I had to go through. I had crosses of every shape, color and different metals. I proudly fixed it on my chain and made sure it showed in all my pictures or when I went out, after all, I wanted everyone to know that “I believed”.

I struggled with the catholic views, god and my mother. I grew up with “Dale gracias a dios!” All the time which means “Give thanks to god” in Spanish. That was my mom’s reply to everything. Jump forward to when I was about 20. I went to mass by myself one day and felt nothing…nothing. I had never felt that way before. I felt empty and alone and I felt the dogmas and rules of the catholic views were unattainable and honestly, just made no sense. I didn’t leave religion behind at the time but I did leave the catholic church, I only went once or twice after that for family things. I started going to a non-denominational Christian church and I really though I had hit the right religion this time, although I still had a ton of questions which no one seemed to be able to answer but at least I was allowed to ask. Hell was still a possibility but this time, I had hit upon the right religion (what?!) so I was saved. It always felt like with the catholic church I had no chance, no matter how many times I confessed, said Hail Mary's or tithed. Personally I don’t understand how people don’t see the catholic religion as a hopeless religion, I never felt saved…ever…I was just told what to believe and I did, call it brainwashed or weak-minded, I did what I was told.

I was god’s biggest fan. I was totally into Christian music, I prayed for hours for my family, friends, “lost souls” who didn’t know Jesus or god, cried for them, tithed 10 or more percent, witnessed, etc. Except for going on missionary trips, I did pretty much everything else. I couldn’t wait for Sundays to go to church , sing, meet my friends, thank god for everything …the whole nine yards.

I honestly don’t remember when I started to have my doubts, it just happened. For those of you who don’t know much about the Christian religion, the bible is always saying to ask god for anything and it will be given to you, provided you prayed in his will…what is his will? Good question, I don't know it either, that was one of those questions no one could ever answer for me. Also I needed to have faith and trust god no matter what, even if he didn’t answer any of my questions and I would cry for hours, hoping for a response. For such a caring god, why wouldn’t he answer me? I did all that was expected of me. Also my pastor said all my answers were in the bible (really?) I don’t believe I ever found answer, no matter how many times I tried to make it fit.

I always found Jesus, crucifixion, dead for three days and back to life thing really confusing. At the time not so much because “my god” couldn’t do it but I just didn’t get it. As a simple minded, sinful human beings, how was I suppose to understand that part? I was always told, “Don’t worry if you don’t understand, just believe”.

The last three or four years have been an eye opener for me, for both good and bad. Religion is one of them. I actually started considering that maybe religion is not so good after all, although I was still a huge believer in god and Jesus. But I just feel the same way I did that day I went to church by myself when I was 20. Today I’m 42 and I just don’t feel anything when it comes to god or religion.

The Christian religion is big on a “relationship” with god, but it feels one sided. After all, for all of us who are in any kind of a relationship, who enjoys it when it’s only one sided? I sure don’t. That I think was my breaking point, the other part is where the bible says god won’t give you anymore than you can handle (WTF?) Easy for him, he’s god.

Am I scared? Very scared…after all, my whole life I’ve been told things are a certain way and to all of a sudden find out it’s not true, can really shakes a person to their core. Funny thing is once you “wake up” it’s hard to go back to sleep.

I admit I still say “god help me” or feel guilty for not praying but I get over it pretty quick. I don’t know I…I feel empty, but at least now I don’t feel like there is a god who ignores me.

Thanks for listening, sorry it was so long.