Between two worlds and outside both 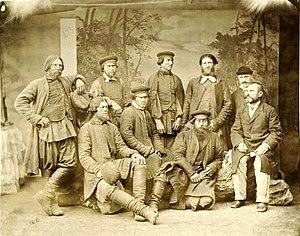 Sent in by rasputins love child

I have hesitated writing my testimonial as I'm afraid I will be identified by my family. I now feel the people here deserve to hear my story, especially after I have ruffled so many feathers. What you are about to read is a mere thumbnail as time and space don't allow me to fully disclose my past. I have never told anyone this story. You are the first.

I was born into a Russian religion called Molokan which means in Russian "Milk drinkers". My father was born in America but his heritage is 100% Russian. My mother, however, is not. She is a mixed race American of English, Italian, Cherokee and who knows how many other influences.

This was a major problem growing up as the Molokan religion, while they claim to be christian, clearly is different than your run-of-the-mill Christians. It is a closed religion. You couldn't join if you wanted. You wouldn't even be allowed inside the church. They worshiped god, not Jesus. They followed the Old Testament, not the new. Most Americans considered them Jews, but they clearly are not.

My family was banned from the church when I was a child because my father married out of the religion. It wasn't until I was about 6 or 7 that we were allowed back, but on strict terms. They dressed in traditional Russian shirts, slacks and wing tip shoes, go figure. The women wore traditional long dresses and shawls to cover their heads.

Because I am only half Russian I am called a ninashi which means "not of us". Church services were held only in the Russian language, which was taught to all children, except of course us ninashi. We were treated quite poorly. Other boys would mentally abuse me and the girls were downright tyrants to me. But this treatment was good compared to how the Americans treated me. More on that later.

Molokans come from all over the former USSR, and were primarily farmers and village workers, peasants if you will. Had no education and were peaceful people that refused to fight in wars. They keep to themselves and worship in private. Truly a tribal people.

The reason they called themselves Christians, as far as I know, is that they believed in the savior, but Jesus left no writings. Everything in the bible about Jesus is, at best, second or third hand information. Since Jesus was the son of god, he worshiped god. Thus, god is more important than Jesus. God laid down his rules in the old testament but Jesus never said a word in the bible, so in their view, people who followed the new testament were worshiping secondary authors at best such as john, not Jesus. Are their words to be taken the same as the saviors? Absolutely not!

This has always made sense to me but Christians just can't see it. The entire Christian faith, every denomination, are worshiping another mans perspective on Jesus. Jesus has not one word in the bible. So if you want to worship god you have to go back to the source, the old testament. Now, I am not saying I believe in any of this, I am saying I understand.

I was not welcome in the Russian church. To them if you are not 100% you are not any at all. This is far lower than being a "halfbreed", I was absolutely worthless. To them it's not if the glass is "half empty" or "half full", it's more like "if the glass is not full, it is empty".

I was told that Grigori Efimovich Novak, AKA Rasputin, was a distant uncle and they feared I was his second coming. They often called me little Rasputin, which means roughly "one of loose morals" in Russian. Hence my current moniker. WARNING: not much is known about Rasputin here in America and what you might read on Wikipedia or other sources is at least in part incorrect. They can't even get his name right! He helped bring down the Russian czarist kingdom which makes him a hero to me. During his time most all Russians were slaves. The word slave actually comes from the root word Slav or Slavic, A Russian!

As bad as this seems it paled in comparison to how I was treated by the Americans. They saw me as Russian, not American. Growing up as a Russian in America during the 1960's was downright shameful. I was beaten and abused on a regular (weekly sometimes daily) basis. I barely remember a time when I didn't have a black eye. On the rare occasion I was allowed to participate I was used as a scapegoat. I was the class punching bag and most every teacher supported this. The teachers were in many cases far more cruel than the kids. My father thought I was a sissy because I was always losing fights. I was always outnumbered and was rarely ever in a "fair" fight. I had nowhere to turn, no one to turn to and absolutely no hope for the future. I am amazed to this day that I survived. I have permanent injuries and disabilities from the beatings I took from the young Americans.

My mother was forced to dress and behave like a good little Russian wife. In other words, you sit over there and keep your mouth shut and do what the men tell you. Don't take off that shawl in public! Us children were not allowed to speak until we were spoken to. A rule I violated regularly with great pride and indignation. When visiting relatives, I spent much time standing on my knees in the corner facing the wall while my "relatives" would say "in my day they would throw rice down first, you have it good".

After years of mental but no physical abuse as Molokan men never hit their wives, that action was reserved for the children, she snapped. At the urging of neighborhood christians my mother sought the advice of a Christian lawyer. He told her a Christian woman cannot be with this man so she must get divorced. She did. That broke up the little bit of family I had. I must say at this point I always loved and respected my father and I never once saw him abuse my mother, in her own words he never laid a hand on her. I rarely saw him as he worked several jobs.

My mother, however, was not an angel. I don't want to say bad things of her but let's say the truth rarely flowed from her lips, when speaking of me. She lied to and disrespected my father. I had little respect for her.
When she took that step into American Christianity, I decided to investigate myself as I didn't think the Molokans were correct about their faith.

I was shocked and appalled how American christians acted and their beliefs truly had no basis in fact. I studied the bible with the apocrypha in much more detail than even the young minister wannabees. I just couldn't understand how they got all their crazy ideas. It simply wasn't backed by words in the bible. The reality is American christians totally disregard the old testament, up until they want to debate creationism that is, then cherry pick their favorite quotes in the new testament. American Christianity or bornagainism as I like to call it, is nothing more than fantasy.

For years I was a silent Christian, having nowhere to worship so my view of god was more of the father of the earth and it's creatures, not so much the evil people who inhabit the place. Eventually since no Christian denomination could live up to their hypocritical words I junked the whole idea. I then investigated every other religion I could find. Being disabled, alone and unable to work for the last fifteen years I had plenty of time to read and learn which is what I did. I studied everything from extreme Judaism to Jainism. Tribal religions of the world to the most disgusting of all, Islam.

I eventually came to the conclusion that the people of this earth have learned many things only to be veiled by the cloak of religious fanaticism. Then what's left gets burned.
No one has the answer because there isn't one
.
There is no god, there is no devil, there is only us and our prejudices.

Being stuck between two idiotic cultures has left me alone, disabled and impossible to understand. I'm on the outside looking in. No one knows the depth of my sorrow. I truly have a Russian heart, filled with sadness and song. Broken and bent but still beating to it's own rhythm. If anyone would have a reason to believe in heaven and hell it is me, but I do not.

Having said that, I would like to add I consider it a privilege to be living in America as the constitution and bill of rights are two of the best self governing documents ever. I only wish the people would spend more time understanding these great documents and less time with their religious mythologies.

It took great courage to put this in print and I hope none of my relatives ever see it. I feel both humbled and embarrassed. Please keep this post private, among us.