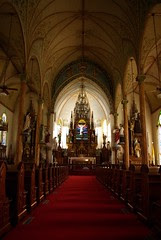 I was raised in a Catholic family, and went to a Catholic school for almost eight years. In my last year I had an older nun, Sister Raymond, around 65 years-old, who did not like me because I used to ask her things that she could not explain. At the time I was following the crowd and dressed and acted the way I thought was popular (wrong). The nuns used to pull my hair and punish me because I had a DA (duck’s ass) haircut and wore pegged pants.

I told my mother, “I have to get out of that school,” but she said, “You have to go to Catholic school.”

Anyway, the next week, I was wrestling with a friend outside the church’s side door, and I pushed his head through it (stained glass). Guess who was right inside? Sister Raymond!

The next week I was in public school. WOW! All the girls had breasts and nice legs, and were friendly. I didn’t know that life could be so free, where I could think and act as I pleased without sinning.

Anyhow, after experiencing a pretty good life for a few years, when I was seventeen years-old I left home (due to circumstances beyond my control - another story). I joined the navy.

When I got out, I was ready to settle down. I had a girlfriend who wanted to get married in a Catholic Church, so she went to classes and converted. When we went to get married, she was baptized by the same priest who baptized me 22 years earlier. Everything went good.

Nine months later, we had a baby girl (very good). About a year later, we were having marital problems, so we went to see our priest. We were talking to him and the first thing he asked was, “Are you practicing birth control?” And I said “Yes.” He responded, “I or the church can do nothing to help you.” I said, “Take your goddamn church and shove it.” Never been back.