Being a missionary showed me light 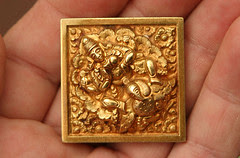 Image by exfordy via Flickr
I was raised in Kansas City, MO by my Charismatic Christian parents. I got "saved" when I was five years old, as do most children born into a Christian home. My mother homeschooled my seven siblings, and I and most of our friends were those from our church, raised in the same way as I.

We attended a non-denominational Christian church in Kansas City in which we practiced extreme Christianity. Worship services were more like raves, with people dancing in the aisles and speaking in tongues, having what seemed to be seizures on the floor. The documentary "Jesus Camp" reminds me of our sermons. We were "warriors for Christ." The church also sent some of it's members on mission trips, primarily in Mexico.

I submitted to all of this. My life goal at that time was to get married, have kids and serve the Lord. I was a typical teenage "Jesus Freak."

When I was 14, the church announced that they were looking for the right people to go on a mission trip to New Delhi, India. I felt that I needed to go. Another contributing factor to my wanting to go to India was that my best friend was also going and I did not want to be away from him. I raised money all summer; mowed lawns, sold Gold-C books, babysat, collected donations, etc.

So here I was, 14 years old on an airplane to India. The goal of our mission, as quoted by our team leader, was to "scout the land" and plant "house churches." We met many amazing Indian natives. We dressed in their native clothing and lived among them in a small village in New Delhi. The problem was, many of them practiced Hindu and Buddhism. We prayed over their "evil ways" and asked Jesus to come into their land and show them the light. I was completely for our cause. I prayed along and even cried for these "evil worshipers."

At the time we were in India, there was a religious holiday called Diwali, which we got the opportunity to experience. We saw the dedication these people had to their faith and how their religion is such a big part of their culture.

When I returned to the states, my 5-year-old sister became very ill. Because of my parents belief that God is the "Great Physician," my sister died on January 9th, 2004. (Google "Victory Halbert.") My parents were under investigation and my siblings and I were put into foster homes. We spent a total of about 3 years moving from foster home to group home and finally were returned to my father, who was now divorced from my mother. My father was depressed and drank a lot and pretty much let me do whatever I wanted.

Coming from the type of home I was raised in, being thrust into the secular world came as a shock to me. One day I was being home schooled by my mother, the next I was forced to go to public school in one of the worst districts in the state of MO.

I rebelled against everything I knew. I skipped school frequently, which led to me dropping out, partied with my new high school friends and eventually moved in with my boyfriend, who I met at school, when I was 17. Soon after, I got pregnant. I moved on with my life and let go of everything that was holding me back. My boyfriend and I got an apartment together and got engaged. In 2008, we had another baby and finally got married when I was 19 and he was 21. We moved into a new house and I ran a daycare out of our home and he, having a college degree, had a great job and we were financially secure.

My husband came from a Baptist background. He claimed to be a Christian, as did I, but we both struggled with our beliefs. Being young and not knowing what to do with that, we never really talked about religion.

I struggled with guilt about my trip to India. I started to realize what I was really doing there; preaching the word of God. Remembering how committed those Indians were to their faith, I realized that I had infiltrated their culture with my beliefs, which now don't even make sense to me. I read the Bible and tried to make sense of it, but I just couldn't. I greatly questioned the Christian religion and felt awkward talking about it with my husband, as I didn't know how he would react, being that he was Baptist.

Eventually it came out that he questioned the Bible and Christianity as well. I was relieved, but we still didn't know what to do about it.

In the summer of 2009, my father, who had radically denounced Christianity and somewhat "gone off the deep end" in his obsession with conspiracy theories and constant talk of religious dogmas, invited us to go on a camping trip in Mclouth, Kansas for a celebration called "Laid Back Labor Day." We were hesitant, as it was a Pagan campground...as Christians we were always taught that Pagans were "devil worshipers" and witches. We ended up going and it changed out lives. We now call ourselves Pagans, although we don't really practice anything, but are open to magic and mysticism and in love with nature.

I am no longer afraid of going to hell and being condemned by god. I realize now that NO ONE is right. How can any one religion be right? I think that religion is more so a matter of culture, I realize that now, especially because of my trip to India. The Indians are not evil just because the worship a god of a different name or because they have not accepted Jesus into their hearts. I know that now. I am free.

I'm not sure what the purpose of this story is. I think it is more of an affirmation of who I am than it is a testimony. I just know that I am happy now and that I am lucky to have my husband to share in my beliefs and realizations of our past as christians. I am glad that I can come here and share my story without being told that I am going to hell (which I am told a lot, even though I do not believe in hell anymore!)

I was not scared into my beliefs. As a Christian, I obeyed for that very reason: fear. I didn't want to be condemned by god to hell, and I tried to live my life according to the bible solely because I wanted to go to heaven. I have a lot to say about the bible, but I won't go into that here.

I must admit that I DO still struggle with fear because of Christianity. I sometimes find myself thinking "what if I'm wrong...what if there is a hell and I'm headed there?" Then I have to shake myself and remind myself that hell was invented by the christians in order to make a perfect world.

Any thoughts on this? I would love to hear from you.

Thank you for reading.