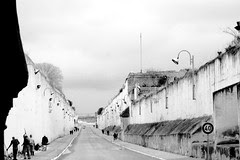 Image by a hundred visions and revisions via Flickr

I was born into a Christian home, my parents both having been raised in the faith, as Baptists. At the time of my birth, in the 1960's, they attended a large non-denominational evangelical church in the Northeast where I was baptized by the pastor, one of the founders of the Neo-Evangelical movement in the 1940's. Neo-Evangelicalism, while supporting fundamentalist doctrines, distanced itself from fundamentalism's anti-intellectual, anti-cultural bent. It was in this church that I was raised, up until around the time I graduated from high school.

Growing up, we always attended church on Sunday. I remember hours of boredom during Sunday morning services, not having the attention span to listen to a 45 minute to one hour-long sermon. The music was also less than inspiring with it's “old-time religion” hymns. (They have since moved on the “contemporary Christian” music.) I hated going. Despite this, during my time in both Sunday School and Youth Group, I developed both a solid understanding of the Bible and a personal faith in Jesus as my Savior.

My childhood was full of anxiety. It was not that my parents laid the guilt of their faith on thick, although there were times, but I think the constant reinforcement of Christian doctrine week-on-week, year-after-year, in Sunday School took a toll. I remember many times feeling I had been a failure. For several reasons, I was never a good student, but I attributed this laziness; the sin of sloth. The typical sexual awakening of youth I experienced filled me with shame; the sin of lust. I remember having several “come to Jesus” moments, breaking down, asking for forgiveness, feeling cleansed and renewed, only to find myself some days or weeks later wallowing in the same guilt and self-pity.

I drifted away after High School. Flunking out of college, I found a job and began my first career. Although I did not attend church regularly, I still believed in God and Christ, the indoctrination of my childhood running deep in my psyche. This time of my life was hard, having little money and relationship troubles with a girlfriend, I might have been in a position to start questioning my beliefs, however I fell in with a bunch of street preachers in the city and experienced a renewal of my faith. This lead me to quit my job and go back to college, choosing a evangelical Christian school founded by the pastor, now deceased, who had baptized me.

Still a poor student, I was again not prepared for the rigors of college life, and I spent a few years struggling academically before taking a job at the same school I was attending. I still had what I would consider a strong faith and saw everything that happened to me as God's providence. I met a nice Christian woman, and we married. After she graduated, I continued my new career at another local university, and we began a family.

I'm not exactly sure when I began to question my faith, the process of de-conversion for me was slow. Neo-Evangelicalism places some emphasis on not abandoning reason in matters of faith, and I think that provided me with an opportunity to question my beliefs that I might not have had if I had been brought up in a more fundamentalist denomination. Sometime over the past four years, I began to question what I believed and why I believed. One of the major catalysts for this was the attitudes of my fellow church goers towards the gay and lesbian community. My work put me in contact with a large number of gay people who weren't the degenerates that they were made out to be by my fellow churchgoers. I couldn't reconcile what my church proclaimed as the official doctrine on the matter with what I believed was the message of the gospels. As a result, on Sunday mornings, I left my wife and family to attend services at a more liberal church. I made no big deal about this. Few people knew, at the time, and they believed it was more for reasons of worship style than doctrine.

My experience as a liberal Christian allowed me to explore further and deeper what I believed. I read the Bible. Of course, I had read it before, but this time I read with a critical eye. I explored alternative viewpoints as to the origin of scripture and its meaning. One watershed weekend, around two years ago, I read Robert M. Price's, The Reason Driven Life. By the time I finished and put the book down, I knew I no longer believed.

I have mixed emotions when I think back on my life and am equally conflicted when it comes to how I should handle the future. I am glad I had the Christian upbringing that I did from a moral perspective. My parents are good people, and treated me well despite my failings. I realize that being a good person and treating people well is not exclusive to Christianity, and I'm well aware of the hypocrisy of some believers. However, I can't help but feel that religion's codes of conduct provided me with a level set of expectations on how to treat other people and expect to be treated by them. I sure could have done without all that guilt, but mostly I regret all the time I've wasted waiting for direction from above on what I should be doing, rather than making my own way in the world.

The only one who knows that I've given up the faith is my wife. She still believes and attends church with the children. I go, on and off. I am fortunate that this has not really affected our relationship or our love for each other. She accepts me for who I am and respects what I believe. I am not sure how my parents or in-laws would react if they found out. I know at least some of them would be extremely burdened and it would change our relationship. I have no desire to cause them pain and don't intend to let them know.

My children also don't know. They have grown up a church very similar to the one I grew up in. They attend Sunday School and Youth Group. They are good kids and have a good set of friends and values. I do want them to know, someday, what I believe, but at this stage in life, I think it might only confuse them. I do try to steer them from rigid thinking and encourage them to be open minded. I think they'll turn out okay.

Thanks for letting me tell my story.